Women, the sea, and food security Facebook Twitter Copy URL
Copied
The fishing industry is primarily dominated by men; however, without women, the industry will have a difficult time

MANILA, Philippines – Dolores Bernabe is a woman of the sea. For years, her heart floated over fishnets, boats, and improvised paddles – all of which she built and created with her own hands.

Also known as “Ka Dolor,” she and her husband Paeng, make a living and a life from the sea.

The couple built their own two-seater bangka out of plywood and scrap materials. Every day, they sail over the waters of Navotas – the country’s fishing capital – reaching as far as Bataan, Bulacan, and wherever the waves take them.

In the Philippines, it is rare to see the likes of Dolor since the country’s fishing industry is dominated by men (90.9%), according to the Department of Labor and Employment (DOLE).

Jobs in the fishing sector are deemed too difficult for women, but Dolor, alongside other Filipina fisherfolk, is breaking stereotypes.

Her love affair with fishing began in the summer of 1965, during a visit to relatives in Bicol. Back then, she  was a 19-year-old lass. She met Paeng, then a 22-year-old fisherman. After a month-long courtship, the love-struck duo left Bicol and returned to Dolor’s hometown of Tondo, where she married Paeng and the sea.

They moved to Tanza where Paeng fished, while Dolor sold fish. Later on, she decided to do more than selling; she wanted to catch the fish herself. 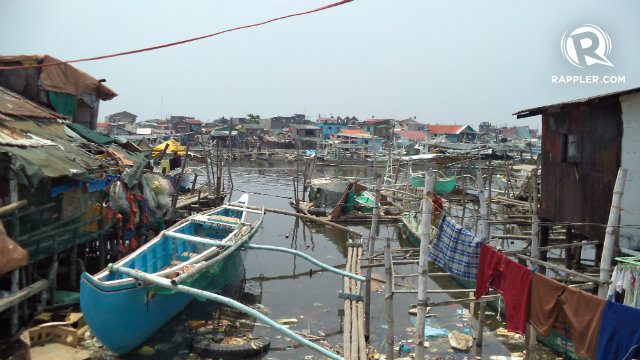 Despite being told that women are unfit for the job, Dolor did not give up. “Kung ano kaya ng asawa ko, kaya ko rin. Nagkakarera pa nga kami eh,” she quipped. (What he can do, I can do too. We would even race.)

No time to eat At 6 pm, she sleeps by the shore, “Binabantayan tubig.” (Watching the water.) By 8, she and Paeng begin paddling for two hours towards Binuwangan, Bulacan.

Before setting up fishnets, they sometimes rest and share 5 pieces of pandesal and a cup of coffee – this serves as their meal for the rest of the journey, costing them P20 a day.

To make more fish appear, they stir the water using a bamboo stick (“tinitimbog”). “Nasusugalan namin galaw ng isda.” Dolor explained. (We bet on the movement of the fish.)

Sometimes it rains, “Nanginginig sa ginaw, papahiran likod ko ng langis pampainit,” she said. (I shiver with cold and oil that warms is rubbed on my back.) They also catch shrimp, with the husband on one side of the net and the wife on the other.

The process takes hours, finishing at 5 am. They paddle for 2 hours going home. Upon arrival, Paeng would rest, while Dolor would travel another two hours to Ongpin – where she spends the rest of the day selling fish. Sometimes her 4 children help her sell. “Walang mag-aalaga sa kanila sa bahay eh.” (No one would take care of them at home.)  She also taught them how to fish.

“Walang oras kumain ‘pag nagtitinda, at nakakahiya sa customer,” she added. (It’s embarrassing to the customer to eat while selling.)

Upon arriving home, Dolor attends to household tasks. By 6 pm, she returns to the sea and repeats the process all over again. “Laging pagod, puyat,” she whispered. (Always tired, lacking sleep.)

Dolor developed a habit of skipping meals – in fact, she has had ulcer since she was 7. “Sakitin ako noon, ‘di ako napapadede. Laging nalilipasan ng gutom.” (I was sickly, not breastfed by my mother and was not eating on time.)  Her mother, a laundress, often forgot to feed all 6 children. (WATCH: Peter Pan and Malnutrition)

To cure her, an albularyo advised her mother to pray to the Black Nazarene. Dolor was even dressed in a Nazarene costume. But her ulcer persisted until old age; it was only cured at 60 when her grandchildren finally bought her medicine. On average, the couple earns P300-P1,200 from the day’s catch. However, a good catch only happens around twice a week although they work daily.

Fishers spend on equipment, repairs, and transportation. Most fishers make their own tools since labor can cost up to P700/day – boat repairs can reach 3 days, while net-making can last a week, with materials costing P2,100.

A small boat costs around P30,000, with additional expenses from frequent repairs due to cheap materials broken down by extreme weather. On each day their equipment are unusable, fisherfolk lose time, food, and income.

They also spend on transporting their catch to markets – which are usually far. Dolor spends P100 on trips to Ongpin. To cut costs, she carries her own buckets instead of hiring men.

“Madalas lugi kami,” she sighed. (We often do not make a profit.) WorldFish, an international research organization, said that small-scale fisheries are critical for the Philippines’ food security.

It not only contributes to economy, but also supplies the dietary fish requirement of over 90 million Filipinos, while also providing jobs for around 1.4 million.

The Philippines has one of the world’s highest per capita fish consumption at 38 kg/year, the Bureau of Fisheries and Aquatic Resources (BFAR) reported.

The Philippines was the world’s 5th biggest fish producer in 2010, according to the Food and Agriculture Organization (FAO). However, the industry’s contribution to the country’s Gross Domestic Product (GDP) remains rather small at 2.2% as of 2011, according to BFAR.

Despite the sector’s significance, fisherfolk are the country’s poorest basic sector with a poverty incidence of 41.4%, according to latest data (2009) from the National Statistical Coordination Board (NSCB). (READ: Why PH agriculture is important)

Although fisherfolk are overworked, labor returns are somewhat small, considering their losses. Competition with big commercial fisherfolk is another factor.

The WorldFish observed that the country’s diminishing fish production is due to:

SEARCA suggested that improving small-scale fisheries can help alleviate hunger and poverty, not only among fisherfolk but even on a wider scale. “The country’s population is growing, more people consume seafood; however, more people are also contributing to the destruction of natural resources,” Rosales argued.

Rosales added that although the country has policies supposedly protecting fisheries, the problem lies with weak implementation. He urged the government to be more serious in improving fisheries and in providing sustainable livelihoods for fisherfolk. (READ: PH fisher folks suffer) “Paano ‘yung walang banyo. Saan sila dudumi?” she added. (How about those without toilets? Where do they go?) The tendency is that people will use bodies of water as their personal toilets and garbage disposals – while also using them as their sources of food and income. Dolor said that most female fisherfolk learn the trade on their own. “Bihira nagtuturo sa babae, kasi mahina tingin sa amin,” she said. “Pero kung gustong matuto, kaya namin. Isang karangalan ang maging babaeng mangingisda.” (Very few teach women because we are viewed as weak. But if we want to learn, we can do it. It’s an honor to be a fisherwoman.)

The sun began to set and Dolor again had to prepare for her long journey.

When asked about retirement, she quickly replied, “’Di ako makatigil dahil ‘pag tumigil ako, wala kaming kakainin. Hangga’t kaya, tuloy lang. Mahirap umasa sa iba.” (I can’t stop because when I stop we won’t have anything to eat. Until I can, I will continue. It’s hard to depend on others.)

For Dolor, the day begins where it ends. – Rappler.com
You can share your stories too. Be part of the #HungerProject. Send us your ideas, video projects, and articles at move.ph@rappler.com.