How ‘Uncle Leland’ betrayed the Filipinos he loved

Apr 5, 2014 9:00 AM PHT
Ryan Macasero
Facebook Twitter Copy URL
Copied
So while Filipinos have much to thank Yee for, they should not forget that he owes them even more It was a story of massive corruption and a scandal that can rival the juiciest scandals of Manila. A state politician in California swept the headlines last week, with implications reaching the far-flung areas of southern Philippines.

California State Senator Leland Yee was a source of inspiration and a symbol of empowerment for the Asian American community. But all of that changed when he was accused by the US federal government of leading a scheme to – among many other crimes – trade at least US$2-million worth of illegal weapons out of the Philippines. It was a story that instantly brought me back to the world I left behind when I moved to Manila a year ago. 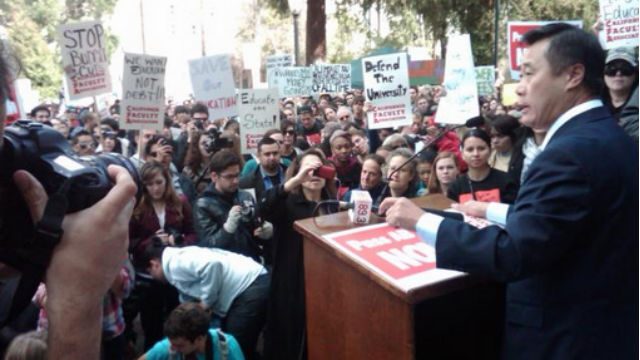 I would bump into Leland Yee (also known as “Uncle Leland” in the local media) often when I was just starting out as a reporter covering elections, government and the Filipino community not too long ago.

Yee was difficult to avoid because he attended almost every important Fil-Am function.

While the election of Obama in 2008 was a major step for racial equality, the struggle for minority representation in the US is far from over. For Asian Americans, Yee was their rising star. And  even more for Filipino Americans.

He wasn’t the most charismatic speaker, but at the time, I didn’t doubt his passion for Filipinos.

Yee stood up for Filipino nurses who were being penalized by their employers for conversing in their native language at the hospitals they worked at. He tirelessly fought for the rights of Filipino World War II veterans and migrant workers. He championed the passage of a resolution in the California Assembly recognizing October as Filipino American History Month, which was later adopted in the US Congress and recognized nationally.

Where Filipinos had a cause, Yee was there to lend his voice – and more importantly – his influence.

It wasn’t until he ran in the District that included an area dominated by Filipinos that his political career soared.

Rarely did an American politician ever take the Filipino community seriously, whose engagement in American politics was known to be consistently low. But Yee did. It was an unlikely contract between Filipinos and Yee, but it was one that was mutually beneficial.

Yee would give his full attention and tirelessly advocate for Filipinos issues in the state legislature, and in return, Filipinos gave their undying support.

But it would be naive to think that his support for Filipino causes was completely out of love and passion. It was politics.

Yee won the Assembly seat against Democrat Lou Papan who was known as the “Dean of the Assembly,” after serving for 20 years. Unseating a longtime Assembly incumbent is extremely rare. “People scratched their heads and said, ‘how did you do that?’” Yee said at the same campaign event. “I won because of the Filipino community.”

His main link to the Philippines – according to the FBI affidavit – was an elusive Filipino dentist in Daly City by the name of Wilson S Lim. He was also a commissioner in San Mateo County, but was on the “periphery” of Fil-Am social circles – as sources described to Rappler. (READ: US gun smuggling: who is Dr Wilson S. Lim?)

Yee and Lim are buddies, and was one who was never too far behind when Yee made guest appearances as a frequent featured speaker at Filipino events. But the extent of their friendship was unknown – until the FBI affidavit was made public. They both were allegedly strapped for cash and both planned the action-thriller-like plot to smuggle the weapons from here in the Philippines. Lim was going through bankruptcy proceedings and Yee allegedly had $70,000 in unsettled campaign debt. (READ: Fil-Am dentist too sick to smuggle guns?)

With his arrest and upcoming trial, this scandal will be a period that will test the loyalty of Filipinos he loved and who loved him in return. Many of his supporters are staying loyal and sticking up for him publicly, sometimes blindly. Perhaps it’s because – despite living in America – we haven’t let go of the Filipino concept of utang ng loob (debt of gratitude) that even a scandal of this magnitude cannot and should not be a reason to drop our guy.

But other Filipinos say they feel betrayed – as they should.

Assuming the charges are true, Yee not only violated the public’s trust in California, but also became a part of the notoriously corrupt system of the motherland of his favorite constituents, which is the reason why most Filipinos left in the first place.

If Yee indeed committed these crimes, it would be the ultimate act of hypocrisy and a betrayal of the Filipino people who not only helped keep him in office, but was the driving force behind his rising political power. So while Filipinos have much to thank Yee for, they should not forget that he owes them even more.  – Rappler.com