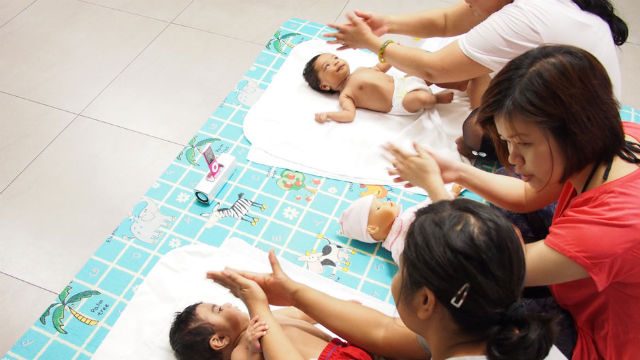 Facebook Twitter Copy URL
Copied
'Many domestic workers leave for home 8 months into their pregnancy. What they do not know is that they are protected under Hong Kong's laws'

HONG KONG – Becoming pregnant should not make you lose your job, or take your own life.

This advice, from a Hong Kong-based charity organization, was issued after a series of tragedies involving Filipina domestic workers in Hong Kong.

In the most recent case, a 38-year-old Filipina reportedly hung herself in her bedroom in her employer’s flat in Kwai Chung after suffering a miscarriage.

She was reportedly found by her employer at about 10 pm on March 27, after having hung herself with a black nylon rope, and had slashed both her wrists. She was dead when found.

Earlier, on March 14, another Filipina domestic worker was reportedly arrested for fleeing after delivering a premature baby inside a toilet in Ruttonjee Hospital in Wan Chai. The fetus was apparently flushed down the toilet, causing a blockage. A cleaner who was called to unclog the toilet discovered the body and called police.

According to Luna Chan, chief operating officer of Pathfinders, a non-governmental organization that assists migrant women facing unplanned pregnancies, the suspect was traced because she had initially signed up at the hospital before apparently delivering the baby in the toilet.

“It is sad,” said Chan, who believes the Filipina had actually miscarried. “Many miscarriages happen because of work pressure.”

Chan said it was unfortunate that the woman panicked after delivering in the toilet, and decided to flee. “Otherwise, she could have reported the birth to the hospital and asked for assistance.”

She said that Pathfinders wants to find the Filipina so she could get help dealing with her case.

In response, the Philippine Consulate General, through Deputy Consul General Rosanna Villamor-Voogel, has scheduled a talk for pregnant migrant workers on Sunday, April 6, so they could be better guided about their rights and benefits.

The Wan Chai tragedy was the second such case of a dead newborn being found abandoned in a public place in less than 3 months.

On January 27, the body of a newborn girl, with her umbilical cord still attached, was found dumped inside a public toilet block in North Point district, also in Hong Kong island.

The baby was found in a black shopping bag that had been left on top of the toilet tank in a cubicle at the female public toilet on Tong Shui Road.

In September 2010, the body of a newborn boy was also flushed down the toilet of a flat in Provident Garden, also in North Point. The body was discovered after residents complained about the blocked sewage pipe.

That followed a similar case in April 2010 when a 38-year-old Filipino maid was arrested after a baby’s body was found in a sewage pipe at a Tseung Kwan O flat.

What many migrant women who suddenly find themselves pregnant do not know is that any Hong Kong resident, whatever their status or occupation, is entitled to medical care, Chan said.

“If they are pregnant and they register at a hospital, they get the same treatment as a local,” said Chan.

Pregnant domestic workers are also entitled to protection under the law, including the right not to be sacked after informing their employers about their condition.

But what usually happens, said Chan, is that the migrant worker hides her pregnancy from everyone for fear of losing her job. As a result, she does not get the medical care vital to her and her child’s well-being.

“Many of them leave for home 8 months into their pregnancy, deliver the baby back in the Philippines, then return to resume their jobs without anyone knowing what they had just been through,” said Chan. “What they do not know is that they are protected under Hong Kong’s laws.”

Pathfinders is sounding the alarm after finding from a recent survey that about half of all pregnant domestic workers in Hong Kong are sacked routinely. The wrong is aggravated when having been divested of work and a visa, the helper is told she is no longer entitled to medical care.

Pathfinders wants this remedied by urging medical care for pregnant migrant workers, up until they give birth in Hong Kong. The group also demands tougher action against employers who violate the law by terminating the helper’s work contract outright, or by pressuring the worker to leave– Rappler.com

This article is reprinted with some editing and is posted with permission from The Sun HK.