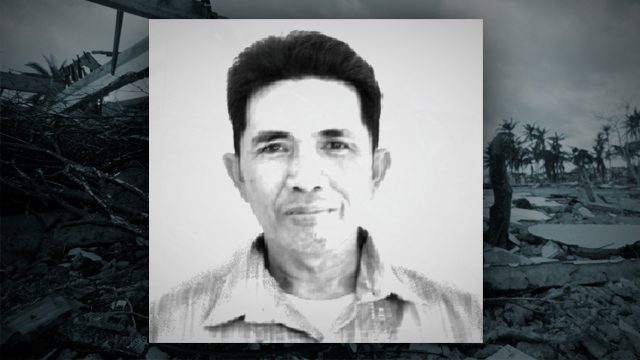 Facebook Twitter Copy URL
Copied
Yolanda’s first casualty in the town of Concepcion, Iloilo, was a rescuer who went out to save lives

MANILA, Philippines – There were a number of them, heroes who rose from the ruins of Super Typhoon Yolanda (international name Haiyan) to tell their tales.

Rogelio Lardera was not one of them.

His story is instead told, and retold, by family, friends, co-teachers, students, and no less than the Department of Education. It is a story worth telling and a life worth celebrating, especially on April 9, Araw ng Kagitingan, when DepEd posted on Facebook about his heroism.

During Yolanda’s fifth landfall in Concepcion, Iloilo, last November 8, 2013, Lardera, a teacher at Concepcion Central School, became one of the town’s first responders. He was ready for it, trained for it, and – consistent to the Rogelio Lardera everyone knew – more than willing to do it. (READ: Dear Teachers: Stand tall – not for ourselves, but for others)

He brought his wife and 4 children to safety first before joining the Manaphag Quick Response Team in the morning of November 8.

They responded to the coastal area of Bacjawan Sur, saving people and children from the deadly typhoon. But on their way back to an evacuation center, a huge tree branch hit Lardera and threw him off the team’s truck.

He became Yolanda’s first casualty in the town of Concepcion.

A man with a big heart

He was fondly called Sir Elyong, a Science and Agriculture teacher whose influence went beyond the classroom walls.

With more than 20 years of teaching experience, Lardera walked his talk as the resident gardener and agriculturist of the school. He also advocated for proper waste management and proper water disposal in the school grounds.

On weekends, he was often seen working on the Gulayan sa Paaralan (school vegetable garden). He also willingly shared his harvest of organic fruits and vegetables, as well as his gardening tools, to his co-teachers.

He was considered a model teacher whose attendance is exemplary, a surrogate parent who took care of his students as his own children, and a colleague who shared the burden of others.

It was not any different at home, where the husband, father, son, and brother gave everything he could for the family he loved the most.

“The DepEd family may have lost a fellow teacher, a wonderful father, brother, and friend; but Sir Elyong’s exemplary service will always be remembered,” the department said in a profile of Rogelio first published less than a month after Yolanda.

As the country celebrates Heroes’ Day or Araw ng Kagitingan, Rappler also pays tribute to other heroes like Rogelio Lardera who braved the strongest typhoon in recent history. Read their stories here. – Rappler.com