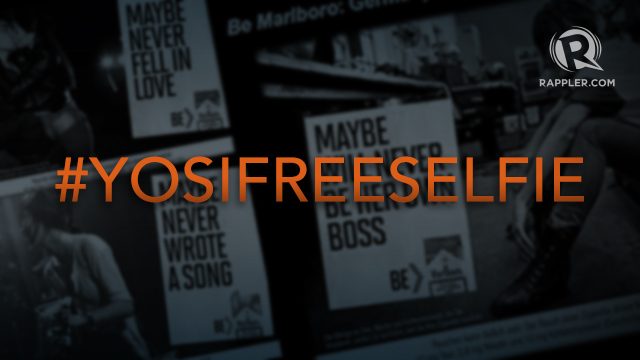 MANILA, Philippines – You probably don’t realize it, but tobacco is all around you – the Philippines is known to be one of the top 20 smoking nations in the world, with at least 17.3 million Filipinos currently hooked on tobacco products.

But tobacco companies take hold of us in other ways. Walk by any street anywhere and you are sure to be accosted by countless sari-sari store signs pushing tobacco products.

At a time where all forms of tobacco advertisement should be banned, tobacco companies circumvent these prohibitions this way: providing free store signages to the millions of sari-sari stores in the country, reaching the very people who ought to be protected from these dangerously suggestive tobacco advertisements – the youth.

All tobacco promotions are dangerous, but today, health advocates around the world are joining together to protest an ad campaign designed to appeal specifically to the youth. 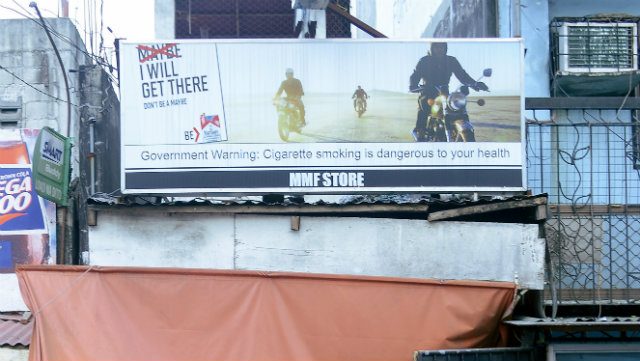 Philip Morris wants your children to ‘Be Marlboro’

The “Be Marlboro” campaign is driven by Philip Morris International (PMI), the world’s largest publicly-traded tobacco corporation. It is active in at least 50 countries including the Philippines, and has already been banned in Germany after a court found that it appealed to children as young as 14 years old.

The campaign exploits loopholes in advertising restrictions worldwide and markets its deadly products to youth on billboards, in nightclubs, in convenience stores, and even through concert sponsorships.

An international report entitled “You’re the Target” exposes how the tobacco industry spent decades studying how to market to children as young as 13 years old in order to increase youth smoking rates.

The report details how PMI spent billions to research and roll out the Be Marlboro ad campaign, which features youthful models doing activities often associated with youth – partying, dreaming, going to concerts, engaging in sports, writing songs, falling in love. The report found that the “Be Marlboro” campaign exploits the youth’s search for identity, suggesting that in the face of uncertainty, they should BE a Marlboro smoker. 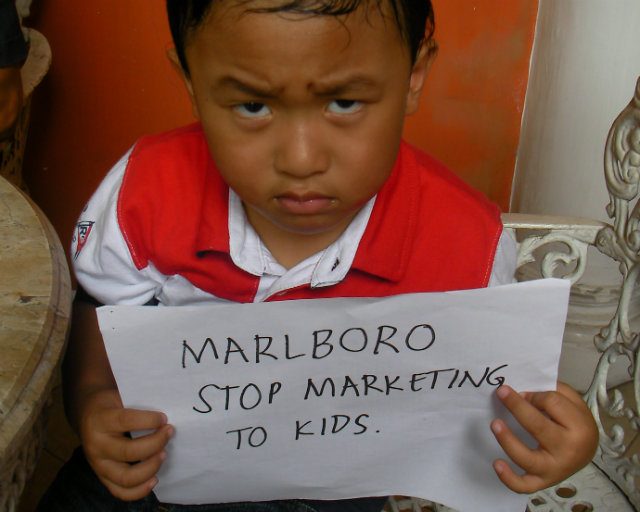 Join the Global Week of Protest

One out of every two smokers will die because of a disease caused by his or her own smoking, according to the World Health Organization.

This is why tobacco companies are targeting younger markets: they need new smokers in order to replace the smokers that have fallen ill or died. The Be Marlboro campaign, particularly because it was designed to appeal to the youth, threatens the health of millions of young people around the world.

Worldwide, health advocates are joining together for a Global Week of Action in protest of this campaign, set to run from April 21 – 25, 2014.

Take a selfie, take a stand

In this way, they hope to encourage netizens to help spread awareness about the dangerous campaign by posting “selfies” while holding signs of protest against “Be Marlboro” and other youth-targeted tobacco campaigns.

It’s easy to participate in the campaign:

The images will be collated and uploaded on the Time’s Up Tobacco website and on the Facebook page. You can also send your selfie via twitter by tagging @timesuptobacco or via email to ia@healthjustice.ph.

Apart from the selfie campaign, an open letter to André Calantzopoulos, Chief Executive Officer of PMI, is also being circulated.

The petition calls on PMI to immediately end all Be Marlboro campaign activities, and to publish a detailed description of “Be Marlboro” marketing activities so that governments and public health organizations can make an assessment of the damage caused by this promotional campaign. Interested individuals who wish to join the petition may do so through this link.

By taking a #yosifreeselfie, you encourage others to imagine a self that is separate and impervious to tobacco. By tagging it #yosidonttargetme, you help make others realize that the tobacco industry has their health and their lives for a target.

Right now, 240 Filipinos lose their lives every day because of a tobacco-related disease according to the WHO. This death toll, more than anything, proves how deadly tobacco products really are. As home to the selfie capitals of the world, Pinoy selfies could help spread the truth about tobacco, and go a long way in sparing future generations from the painful losses caused by tobacco. – Rappler.com

The Take a Selfie, Take a Stand campaign is an activity of Time’s Up, Tobacco!, a public movement meant to make tobacco companies accountable for the harms that their products cause, both to smokers and non-smokers alike. To know more about the campaign, visit the Time’s Up, Tobacco Facebook and Twitter page.