Who stole the UP sunflowers? MANILA, Philippines – We bet many didn’t know – those sunflowers along University Avenue on the Diliman campus of the University of the Philippines (UP) are sentimentally tied to graduation.

Every summer, they bloom in time for graduation, as if to cheer on the fresh batch of Iskolars ng Bayan who are about to face the real world.

We bet many didn’t know – the university shells out almost P400,000 every year for the planting and maintenance of those iconic blooms. And to preserve the seeds for another year of planting, the UP Campus Maintenance Office (UP CMO) prohibits people from picking the sunflowers. Not even a stalk.

And without Facebook, perhaps many would not have known that a family disregarded university rules by picking off sunflowers just days before graduation rites on Sunday, April 27. Mom doing it for some time

An account and photos of the incident, posted by UP Diliman student Hazel Lapitan, went viral, sparking a debate that mostly condemned the sunflower picking.

Based on her post, Lapitan was in the sunflower area taking pictures at around 5:50 pm on Friday, April 18.

She noticed 3 young ladies uprooting sunflowers and placing them in the trunk of a red Toyota Vios. Staying in the driver’s seat of the car was an older woman, presumably their mother.

Lapitan told the girls to stop because sunflower picking was prohibited. One of the girls told her, however, that they had been doing it for awhile, following their mother’s example.

“One girl told me that it was okay because they have been doing it for a while. ‘Oo matagal na itong ginagawa ni Mommy eh,’” she recalled one of the girls telling her. (Yes, Mommy has been doing this for a long time.)

When Lapitan started taking pictures, the woman in the car threatened to take her pictures as well, she said in her post.

“They took more than 3 stalks of the plants and continued to break off the flowers as well,” she told Rappler in a personal message on Facebook. 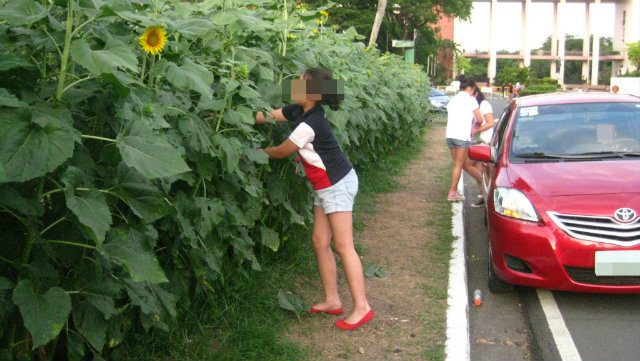 Lapitan’s post, which called for help in identifying the perpetrators and for the proper authorities to act on the incident, was shared more than 2,200 times before she changed its privacy setting to “Friends Only.”

Garnering almost 2,200 shares on Facebook, the post yielded reactions that ranged from “That’s our sunflower!” to condemning what they called was a clear case of stealing to “That’s how corrupt politicians are made.”

(Just last Friday, April 25, Manila Archbishop Antonio Luis Cardinal Tagle enjoined graduates of UP Manila to choose to join the roster of citizens who will be honorable and honest in their dealings.)

Some Facebook users, however, used the “He who has no sin, cast the first stone” argument, while some regarded Lapitan’s post as a form of cyberbullying. One warned that it might get her into trouble for doing public shaming.

Lapitan replied to such comments, saying what she did was not bullying but reporting a crime she witnessed.

“I have no malicious intent in posting these pictures,” she explained. “Please realize that if you want to correct something, you have to put your foot down.”

To answer those who question the purpose of the post, she said she had reported the incident to the UP Police and would post any updates.

Most members of the UP community were irked by the photographed act and called for necessary punishment.

“Hindi ba kapag naman nasa premise ka ng school or ibang lugar, automatic na di ka dapat manira o kumuha ng kahit ano?” said graduating student Hajilyn Javier. (When you’re within school premises or in other places [not your own], isn’t it automatic that you don’t destroy or get anything?)

“Respeto lang sana lalo pa at wala nang ganito next graduation,” she said. (And it boils down to respect [for tradition]. The next graduation won’t have these sunflowers anymore.)

And, yes, we bet many didn’t realize that this is the last UP Diliman graduation that coincides with summer and the blooming of sunflowers. Last March, the Board of Regents, the highest decision-making body in the university, approved the shift of the academic calendar to start in August and end in June.

So thanks to the family who didn’t see anything wrong with breaking UP rules, this year’s graduates will have their sablay, but with not too many of their vibrant sunflowers to greet them along University Avenue on Sunday. – Rappler.com

Jodesz Gavilan is a writer for Rappler and is a recent graduate of UP Diliman.