Someone to roll my eyes with

May 5, 2014 11:30 AM PHT
Joey Ramirez
Facebook Twitter Copy URL
Copied
Despite society's judging gaze and just the ups and downs of a relationship, two people celebrate 17 years of happiness 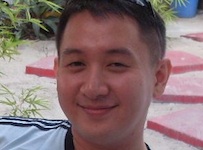 Having just come from the national catatonia known as Holy Week in the Philippines (when pretty much everything shuts down), I made an early start on Monday to shake off the lethargy by getting to the briefing by our investment officer early.

I thought I would be able to enjoy a few moments alone to savor my caffeine fix; alas, that was not to be. Many of my colleagues probably had the same thought of getting things done, so I arrived at the office with everyone all perky, and regaling each other with their Holy Week exploits.

One such person made a pointed announcement of declaring her piety, how she was up at 4: 30 am doing something at the church, the services she attended and helped organized, and how she was telling us this to “encourage” us to be more like her.

I had the urge to look for Art to roll my eyes with. Having spent 17 years with this man, he already knows – automatically, it seems – what would get a rise out of me, what would make me double over in laughter, and yes, what would induce eye-rolling in me, the type which would enable me to “see my brain,” as that Facebook meme suggested. (READ: Are Filipinos racists?)

I’m told that 17 years is nothing to sneeze at, and it must be why we received many heartfelt greetings when we opened our social media accounts. And while I am tempted to say that this has nothing to do with a couple being gay or straight, being half of a gay couple that has weathered close to two decades has given me a changed perspective from the time I was cognizant of my orientation and giddy at the thought of stepping out on first dates, to where I am right now.

The biggest difference between gay and straight couples is that there are no defined gender roles with us, because that point is effectively rendered moot in a same-sex relationship, of course. (And it irks me no end when clueless people have to ask “but who’s the bride/woman/less dominant in your relationship?” which is a clear attempt to make it fit into a heterogenous mold, or at least make it “less mysterious” to those who have no idea how gay couples “make it work.”)

Instead, we think of our contributions to the relationship as a meritocracy of sorts: if you’re skilled/good at (insert action here), then you will be “assigned” that role. Art is an excellent cook, a skill he learned from his parents who ran a carinderia while he and his siblings were in school. I can’t cook to save my life – heating and steaming things doesn’t really qualify as “cooking” in Art’s book – so anything culinary is usually his domain.

In matters where we have to deal with bureaucracies, dealing with inept service, or making our voice heard, I end up taking the lead because I do have a knack for acidic vocabulary as well as conveying when I want things to be done a certain way. I had relegated my passion for writing to the back burner when I first started out in a different field, but I couldn’t really keep that almost-faint ember from reigniting the older I got (and realizing I have to do what I want to do now, no longer constrained by “survival” and focusing on doing what makes my heart sing).

And while I have seen changes in how the LGBT community has been received over the years, the incontestable fact still remains that many of the institutions that we hold dear or are of importance still do not recognize our unions, something that I have been taught is a basic human need, the need for validation from others.

There has been little change insofar as receiving benefits are concerned: despite the years we have shared a life, I cannot declare Art as my beneficiary in an insurance policy, nor can I declare him my next-of-kin should I need to be hospitalized. (And of course hospitals only authorize family members as the only ones “allowed” to stay with a patient, even if those particular people have come close to killing each other, with so much hate seething.)

Many LGBT members are still devout and loyal to the faith they were raised in, despite being shunned, ostracized, and even hated by their very religion, a facet that few straight people – if any, at all – will have to grapple with. For many people, their faith is a source of hope, strength, and even love, but LGBT members have to deny a basic, core part of our identity in order to be welcome, being “asked” to remain celibate in order to be “accepted.”

It is against this backdrop that Art and I are celebrating our 17th year together. Which is why we cherish each and everyone who took the time out to wish us well, and even more years of “blissful togetherness,” as a friend put it.

Make no mistake, there were moments that were hellish – and the future will no doubt be a mix of bliss and hell – and it is at this point that I see our similarity with any other straight couple, whether married or not. Any relationship demands compromise if it is to savor longevity, and gone now is my youthful idealism of declaring that any potential partner “has to accept me fully, no ifs, no buts!” I have stopped seeing compromise as an enemy to individuality but rather – and yes, this may seem strange and the antithesis of that position – as an acceptance of each other’s quirks, and making a life together possible, even enjoyable, realizing that we are two different people who have decided to share our time and commitment to and with each other.

Did we celebrate the day in a big way? Not by traditional definitions. We didn’t have a band playing our favorite songs, a ballroom reserved to entertain and dine in, or exquisite calligraphy on hand painted invitations to commemorate it.

We went to work, and when Art got home, he wasn’t feeling well, so I had to “cook” our dinner (see reference to heating above) and showed off my skill in cooking (the one that passes Art’s definition) rice, the one thing he concedes I can do better than he does.

A bit on the mundane side, yes, but it is the sum of the mundane that has made our life together. When you have someone you feel so much passion and love for, that mundaneness can be a thrill. The big dramatic moments – when we had a fight about his dad, or when we received letters from a relative calling us monkeys – are mere markers in the big tapestry that we call a shared life.

Odd, indeed, but knowing I have someone to roll my eyes with makes my heart still go a-flutter. – Rappler.com

This article first appeared in the author’s blog http://theguywithablog.blogspot.com.

Other articles by Joey Ramirez:

Why do maids have to wear uniforms?