Organic farming: The answer to food insecurity in Yolanda-hit areas 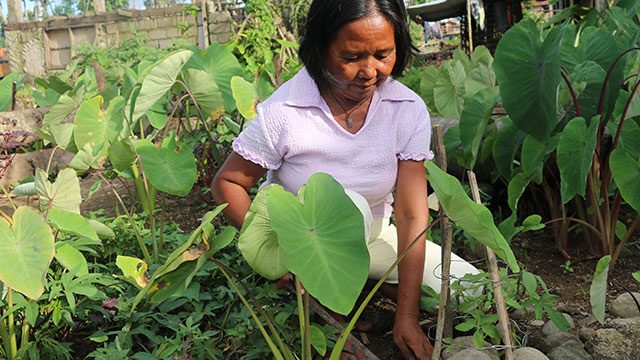 LEYTE, Philippines – The town of Dagami, Leyte, located 32 kilometers from Tacloban City, prides itself with verdant lands planted to coconut, rice, and corn. Yet the once plentiful harvest became a distant memory when Typhoon Yolanda (Haiyan), the world’s strongest typhoon in recent memory, brought about unprecedented destruction.

Eulita Dumpay, a 57-year-old resident of Dagami, shared her family’s struggle to make both ends meet when their only source of livelihood was destroyed. She worked as a farm laborer while her husband Paquito, 58, tended coconut trees owned by a landlord. She said work became scarce after the typhoon because even the landlords suffered great losses.

“All the hard work and sacrifices were blown away by Yolanda’s fierce winds,” Eulita said.

Eulita and her family is only one of the 3,423 coconut farmer families affected by the super typhoon. Around 793,699 coconut trees were completely damaged and only 50% of the 87,301 severely damaged trees are expected to recover and be productive after 3 to 4 years, according to the report of the Dagami Municipal Agriculture office. Based on government data, damage to crops reached around P27 billion ($607 million). Coconut farming suffered the most damage with P17.9 billion ($402 million) in lost crops. It will take 6 to 8 years for coconut trees to be productive. (READ: Coconut, rice farmers worst hit by Yolanda)

Eulita said that seeing new sprouts spring from the ground is one of her sources of joy. So when she learned about a lecture on organic farming, she came to listen and learn.

Around 40 persons, mostly mothers, gathered outside the torn village hall as Reynaldo Cabudoc, a farmer and now a trainer and advocate of natural farming, explained the benefits of making and using organic fertilizers to regain the productivity of the soil.

World Vision linked farmer trainers – who have personally seen the benefits of using organic farming – to the communities to inspire the residents to make the same decision. (READ: How food insecurity threatens us)

Dagami municipal agriculturist Leo Nevaliza said they are also persuading coconut farmers to grow cash crops like cassava, corn sweet potato, and even coffee as it only takes 3 to 4 years to harvest them.

“We welcome the efforts of non-governmental organizations (NGOs) and other private groups to assist our farmers in recovering (sic) their livelihoods. We invite them to sit with us so our work will complement, and to avoid duplication,” said Nevaliza. Armed with new knowledge, Eulita said she’ll continue cultivating her land, which she knows will once again reward them with good harvests.

“My husband and I will plant more vegetables this time and we’ll make our own organic fertilizer. It’s easy and good for the soil and make the produce free from chemicals,” she added.

To build the resilience and capacity of the families to restore their livelihood, vegetable seeds were provided for the community garden in the villages of Sawahon and Hiabangan. The farmers received technical assistance on vegetable production like planting techniques and planting bed preparation.

An orientation on proper preparation of community gardens was also conducted among 108 farmers in Fatima Village, Dulag town.

Agustin added that once the families’ immediate need for food is secured, inter-cropping will be done in upland areas. Other farmers will be taught to plant fruit-bearing and other trees to sustain their livelihood.

World Vision’s recovery work now focuses on strengthening the resilience of typhoon-affected families through an integrated approach that supports needs in shelters, water, sanitation and hygiene, education and livelihood in the provinces of Leyte, north Cebu, Aklan and Iloilo. – Rappler.com

Leoniza O. Morales, is a communication officer of World Vision Haiyan Response and is currently based in Tacloban City.