My name is Clare Amador. I am an unknown and Budget Secretary Florencio Abad is my mentor.

Sec Butch has been my boss for more than 5 years – the longest I have ever worked with anyone. I grew from being an assistant to being his chief of staff. He is my boss then my teacher, and over the years, he has become like a father and a friend.

I met Sec Butch when he chose me to be his assistant on his first day as campaign manager for then-presidential candidate Mar Roxas. He didnt know me, he didnt see my CV. He just told me that some people told him that he could depend on me, and there we were.

To this day, I owe a great deal of gratitude to the people who gave him my name – you see, Sec. Butch did not only give me a job; working with him helped me define my life’s direction.

During the campaign (Sec Mar’s and then PNoy’s), many of our discussions were defined by a question he always posed: what would you give up in order to be something more?

The campaign, and more important, nation building required sacrifice. And we are all called to make sacrifices, to this day.

“Integrity,” he said, “is doing (exactly) what you said you will do.” Of course, not a lot of people know that what he says in public are things he says in small groups, in internal discussions, and even in conversations with friends.

When he talks about making “walang corrupt, walang mahirap” (no corrupt politicians, no poor people) possible, for his part, he meant making the budget transparent, accountable, and participatory.

Big words – but these have taken shape in DBM: we rolled out bottom-up budgeting, we opened the budget process to civil society organizations, we publish budget documents, we engage in Open Data, we enforce performance-informed budgeting, and we have created and revised policies that would make government efficient and responsive.

And yes, these are things he discusses in public and even in conversations over beer. He is that consistent. And many of these things are unprecedented (and this is just a partial list). It required hard work on his part to push for these reforms and hard work on the part of the DBM to make them all happen.

Because of Sec Butch, I finally understood what it meant to commit. I remember that day back in 2008. It was late afternoon, and it was raining. I had to run off for a trip with friends to try the PNR to Laguna. It was during the (presidential) campaign. He had a meeting, and another.

I couldn’t leave. I looked out the window, at the near-sunset and remembered a good friend’s wise words: “Commitment is freedom.” And just like that, I gave up my trip and decided – at that moment – to also give up my small volunteer organization, YTRIP.

I had to commit. And I committed to the mission at hand: more than the presidency, the commitment was to help reform government, to build the nation, to make the Philippines better.

What we don’t know

And here I am. Here we are.

They think they know but they don’t. I wish I could tell you all the other stories when my boss showed his integrity, his passion, and ideas about change for the country.

Yes, we are still here. 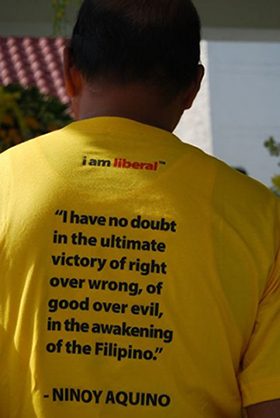 This is a photo I took of Sec Butch a couple of weeks before he took me in as his assistant. I was on the brink of resigning then because I didn’t know what to do at work. I was told to stay and wait for him. It was one of the best decisions I have ever made as a Filipino.

I have never imagined I would be part of something this great at this scale – and I thank my boss not only for the lessons he made me understand – but that, by being demanding, empowering, grounded, and brilliant, he has made me not only a better worker, but a better Filipino.

This photo is the current profile picture of my boss’s Facebook account. We both forgot his password and the email we used for it so it will remain that way. And it’s fine.

It will remain that way to remind us to keep the faith. My boss, in many moments in our history told me, “You have to trust the Filipino people, Clare. They will not fail you.” Just like Ninoy Aquino, he has no doubt.

And I continue to trust, but not without thought and thanks to one of the reasons why I still do.

Here, Pilipinas, is a man who has not – and will never – fail you.

I consider myself very fortunate to have him as my mentor. Our whole team feels the same way, too. – Rappler.com

Clare G. Amador is Budget Secretary Butch Abad’s chief of staff. She is one of the youngest assistant secretaries in government today. She believed that if one wanted to effect positive social change, joining government is one of the best things you could do; so, she let go of her complaints about the country and did just that. She graduated from the Ateneo de Manila University with a degree in Development Studies.  Clare first posted this piece on her Facebook account.