Feeling jaded, I volunteered after Haiyan 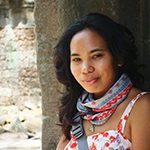 Facebook Twitter Copy URL
Copied
'Working in the Rappler office in Manila and being miles away from the heart of the devastation made photos just photos. Without knowing it, I eventually lost the tight feeling in my throat whenever I read a survivor’s story or watched a video of a destroyed town.'

Working in the news isn’t always the big adventure people imagine. For people like me who exist in the background and help reporters create journalism magic, the biggest hazard of the job is becoming numb to emotional events – even jaded to a certain degree.

After half-a-year of processing stories upon stories about Super Typhoon Haiyan, locally known as Yolanda, I had probably already seen hundreds of images of a ravaged Eastern Visayas. A week without a story about the disaster’s aftermath and the politics surrounding the necessary rehabilitation was rare.

Working in the Rappler office in Manila and being miles away from the heart of the devastation made photos just photos. Without knowing it, I eventually lost the tight feeling in my throat whenever I read a survivor’s story or watched a video of a destroyed town.

It was a slightly inconvenient realization to have while on an early flight to Tacloban city, one of the places worst hit by Haiyan.

I was on my way to Leyte to volunteer for Gawad Kalinga’s (GK) Bayani Challenge. For 3 days, I was to help build houses in their GK villages, get to know the people who lived there, and basically assist in any way I could.

I only knew the Leyte I’d seen through the lenses of other Rapplers, so defying logic, my expectations were grim at best. I felt myself unconsciously preparing for the stench of death and the sight of faces lined with fear. 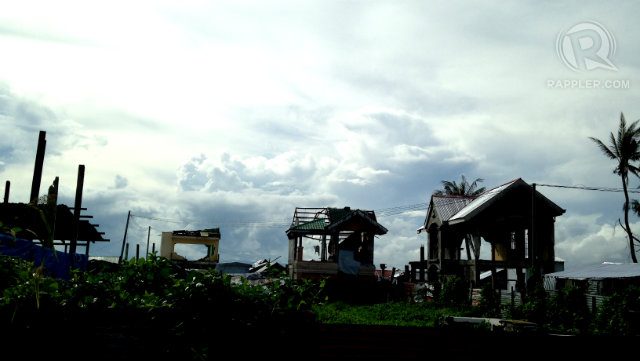 It surprised me to see that Tacloban was mostly like any other place in the Philippines. Businesses were opening up for the day, people were waiting for jeeps, small restaurants were serving breakfast to early birds. At first glance, the only remnants of Haiyan were the skeletons of buildings and the tents from aid agencies planted on every other street.

From Tacloban, I made my way to the municipality of Albuera where I was assigned.

After hours of looking out at green fields and far off visions of mountains and sea, I started to forget that just roughly 6 months earlier, it was a place of horror. But then I passed by a huge building that had fallen down on itself, a plot of coconut trees whose unmoving leaves made it seem like the winds of the typhoon froze them that way. I realized where I was.

Most of my brief stay was exactly like that drive.

The tiring work of carrying sacks of sand, mixing cement, and painting walls under the heat of the sun was outweighed by the warmth of the people of Albuera. After just being there for half a day, everyone already treated us like family.

Despite needing much more than our presence and the meager help we or the organization we were working for could give, they acted like our being there was enough. In the morning I saw lush forest stretching out on either side of the GK village, at night the sky was thick with stars. And just when I was starting to get lulled into a sense of comfort, reality hit me. On our second night, my co-volunteers and I had seen two shooting stars. In the middle of rejoicing, Erwin, one of the young locals, told me it reminded him of the days right after Haiyan.

There were no casualties in the town of Albuera, only missing roofs. Every night, Erwin would go to sleep looking at the stars feeling thankful and thinking, “Kung ganito pa rin kaganda yung langit, may pag-asa pa talaga.” (As long as the sky is this beautiful, there really is still hope.)

Like Erwin, everyone I met in Leyte knew the date November 8, 2013. Just talk to them briefly and immediately they’d tell you what they went through the day Haiyan struck, and what the days after were like. It was surreal when I started a conversation with someone and his tone and body language told me he was in a good place, but the stories he told seemed to be straight out of a nightmare.

One of the friendliest people I met there was the one person who made me cry.

On my only afternoon in Tacloban, Anj, a GK youth volunteer toured me around the city. I asked her to take me wherever there was something interesting to see. On the way, she said she was going to bring me where all the visitors like to go. We ended up in Barangay Anibong where up to today 4 beached ships stand, dragged there by the storm surges of Haiyan. The sight of huge boats surrounded by makeshift houses was bizarre – even more so because of tourists having their picture taken in front of the vessels that flattened homes and killed people.

After, as we walked back to the GK headquarters, Anj shared with me the Tacloban she could see. Down this road was the building she camped in, fearing the waters would reach her and wash her away. On that street was the lamp post where her friend had clung to for life, trying to save children who were floating by and eventually losing them because they couldn’t hold on anymore.

This building’s signage was where her dad had hung on, thrown there by the high waves. This was the store her dad had chosen to loot out of desperation, picking up whatever he could find. And this barangay was where they had asked kids to draw what they wanted for Christmas, so they could ask donors to chip in for gifts.

At the GK headquarters was where they looked at the kids’ drawings and found that they had written down mostly names – mama, papa, kuya (brother), lola and lolo (grandmother and grandfather).

The people I met have seen things no one ever hopes to see and yet they were eager to talk about them. Yes, they were people empowered by volunteers surrounding them, but if they are slowly getting used to the idea of what they lived through, it’s a sign that the rest of the survivors will follow.

Psychology tells us the final stage of grief is acceptance. Perhaps in their place becoming numb and unfeeling isn’t necessarily a bad thing. From a traumatic experience, Haiyan is becoming a part of themselves. The faces I expected to be drawn with grief showed fortitude. I left Leyte with renewed energy at a time of personal doubt and with a thirst to help much more than I did.

The situation remains dire, there are many ways it could get worse, and half-a-year later, there are still residents in tears. Through it all, the people of Eastern Visayas have reached the highest achievement anyone could expect of them: to keep on going.