Pasig City: Learning from Ondoy, ready for the rain 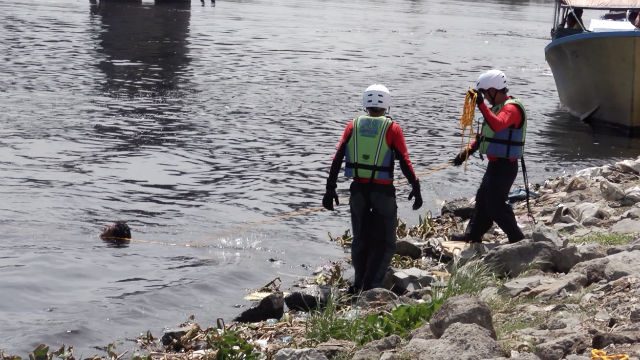 Facebook Twitter Copy URL
Copied
Pasig City is a recognized leader in urban disaster preparedness. But the city was not always this prepared. Rappler takes a look at what makes this City resilient.

MANILA, Philippines – Of all the extreme weather conditions that it has withstood, Tropical Storm Ondoy (Ketsana) will be the most haunting for Pasig City. When the storm hit the Philippines in 2009, flood waters submerged thousands of homes in the city, both from the poor and affluent villages.

In Barangay Santolan alone, home to some 7.34% of Pasig’s population, roughly 30,000 residents were forced to leave their homes.

According to Mayor Maribel Eusebio, Ondoy was a wake up call for the city.

“The city’s sad experience with Ondoy awakened us to the need to further intensify our disaster risk reduction and management (DRRM) system through a more aggressive approach to disaster preparedness, response, relief, recovery, and rehabilitation,” Eusebio said.

Pasig has been governed by the Eusebio family since the early 90s. Former mayor Bobby Eusebio, husband of the incumbent one, began to invest in disaster preparedness during his term. When Maribel took over in 2013, she sustained her husband’s initiatives.

Pasig City is susceptible to many natural hazards. It is prone to flooding because of 3 surrounding major waterways – Pasig River, Marikina River, and the Manggahan floodway – and the Laguna de Bay. The West Valley Fault line also passes through certain parts of the city, making it susceptible to earthquakes.

But, Angeles said, the city is ready to respond to any eventuality.

Following national laws, the city allots around 5% of its local budget for its disaster preparedness operations. In 2013, it spent a total of P244 million for this purpose, according to a report it submitted to the Department of the Interior and Local Government (DILG). Of this amount, some P163 million was spent in mitigation initiatives.

The city has decided to be more proactive by shifting their focus from disaster response to disaster mitigation.

“Preparedness and mitigation is (now our) top priority because our goal is to have zero casualty,” Eusebio added. As part of its mitigation program, Pasig created hazard maps based on the risk analysis of the local government and its own barangays. They distribute these maps to residents so they know if they’re living in flood-prone or earthquake-prone areas.

The city’s DRRM council also created its own public alert warning system. This ensures that the city’s and residents’ responses and actions are better communicated, Angeles said. Pasig City also started upgrading its disaster response and hazard monitoring facilities. From 2007 to 2010, the city built a City Command Center (C3) – an operations center (opcen) where the Emergency Team can monitor everything from crimes and emergencies to flooding and rescue needs, and coordinate action with responders on the ground.

The local government installed over 220 CCTV cameras and weather sensors around the city to track hazards and crimes. Everything that happens, from its least developed barangays to its central business district can, be monitored in the C3.

“We’ve recently installed our mouths and ears outside. We can now sense if there is an impending rain, what the temperature is outside, or if there is flooding. We can also send out messages,” Angeles added.

The city also installed its own pumping stations and dikes to protect its flood-prone communities.

Pasig City’s whole process of rescue is integrated from the moment a report is received until the responders are done with their operations. The two main actors – those in the OpCen and the ground responders – maintain close coordination with each other. According to Angeles, the C3 OpCen gets reports from two sources – its emergency hotline (643-0000) and social media. The C3 OpCen staff gets the report and records it in their computer system. Once the report has been verified, the radio dispatcher coordinates with and deploys the nearest responder from the incident.

All the actions taken are recorded in the C3 OpCen. The staff closely monitor the responders on the ground, giving them updates and additional information they might need.

The city’s system has been effective in past weather events, particularly in the Habagat (monsoon) that hit Metro Manila in 2012 and 2013. Pasig was able to evacuate its residents even before the flood waters rose. No lives were lost. Angeles emphasized that community-level preparedness is still the most important step to mitigate risks caused by natural and man-made hazards.

“When the city undergoes training, we make sure that we cascade it to the barangay officials. They will then relay it to their constituents. But we never stop there, we coordinate with different offices so they can conduct knowledge type trainings to residents,” Angeles added.

A big challenge for the city is how to deal with the varying capacities of its barangays. To address this, Pasig created a clustering system that mobilizes local responders in the event of a national calamity.

Pasig’s system focuses on how barangays can systematically help each other in times of need, and clarifies the roles and functions of each community leader during disasters. Local officials regular meet each other to strengthen ties that will be tested during emergency response.

“Around six to seven communities help each other in one cluster so the response is stronger. If you’re only one barangay, your response is limited. But disasters don’t always happen in one area so not all communities are always affected. So those communities that are not affected, can support affected communities within the cluster,” Angeles added. (WATCH: Pasig City weapons vs disaster: Communication, cooperation)

For 51-year-old Pasig resident Ma. Teresa Ramos, the most difficult part about Ondoy was dealing with its destructive aftermath.

“Access to basic necessities was really hard. We needed to ride a boat to go to the market, for example, where prices of goods were soaring,” she said.

Ramos said the changes in Pasig after Ondoy were substantial. “The Pasig City Government learned its lessons from Ondoy, I think, and they realized that prevention is the most important thing. Roads and drainage systems were fixed, and the flooding isn’t as severe as before.” She added, however, that more still needs to be done.

Cecilia Pauig, a 48-year-old president of an accountancy and brokerage firm, wanted to move her family to a flood-free area of Pasig after Ondoy. But she appreciated how Pasig dealt with the crisis.

“They improved their sewage system all over Pasig, especially those in low-level areas. That is why Pasig was less affected during the Habagat,” she said referring to the massive monsoon flooding in many parts of the metropolis in August 2012.

Training residents on disasters is one thing but maintaining the information and knowledge skills they learn is another. Angeles said this is another challenge the city faces – making sure programs are sustainable.

“This is why we always make sure to remind the community to conduct annual program on drills, seminars and knowledge campaigns,” Angeles added.

Pasig is also affected by disasters in nearby cities. A disaster in a neighboring city could potentially threaten Pasig’s residents. The city knows it cannot operate independently of other local governments.

Another challenge is keeping information current. The impact of climate change is unpredictable and no two disasters are the same. This is why Angeles believes that the city’s DRRM plans must constantly be updated.

“The challenge is to keep on improving, upgrading and enhancing our skills, knowledge, and capabilities. We need to keep up to date and always be alert,” Angeles said.

Towards a resilient city

For its efforts in DRRM, Pasig City has earned awards as a model of disaster preparedness among Philippine local government units.

In 2012, the city became a Hall of Famer in Gawad Kalasag – the premier national disaster management recognition program given by the National Disaster Risk Reduction and Management Council (NDRRMC) – as the Best Government Emergency Response Managers. A year later, they were named the Best City Disaster Council in the country by the same awarding body.

Angeles believes Pasig City is ready to face future disasters and emergencies but he and his team are never complacent.

In every calamity that it experiences, the city continually assesses its disaster programs and projects to see which worked and which didn’t.

Angeles said Pasig’s preparations are small steps toward building a resilient future for the city.

“We can say that we’re getting there. We’re really preparing. Pasig is slowly becoming a smarter and safer city.”