PWDs and the Philippine media 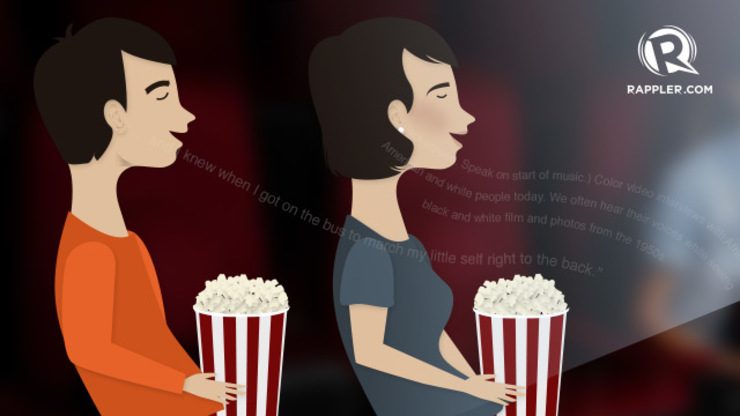 Facebook Twitter Copy URL
Copied
How does the Philippine media represent PWDs? And how can the media become more accessible to them?

Bisda is a member of the Nationwide Organization of Visually-Impaired Empowered Ladies (NOVEL). She advocates the use of “audio description” in movies.

She subscribes to Blind Mice Mega Mall, a foreign website which provides downloadable movies with two types of audio: the regular film audio, and another one describing scenes, characters, and actions.

“Enjoying films is a form of leisure, it’s also a right,” Bisda said.

NOVEL is currently lobbying for Philippine cinemas to provide film audio description. They are planning talks with the MMDA which is in charge of the Metro Manila Film Festival.

In other countries, cinemas provide optional headphones for audio description.

Celia Garcia, a mother of a blind child, also advocates for “descriptive movies.”

These movies provide audio description and captions or subtitles, which can either be shown on the big screen or on small portable screens.

Garcia is a member of DeafBlind Support Philippines Inc. She currently visited WGBH, a public TV station in Boston, where she learned about descriptive movies.

“It can be done here too. All we need is the technology, and to train people,” she said.

From her trip, Garcia brought home a copy of Life of Pi and showed it to students of the Philippine School for the Deaf and Blind.

“Can you imagine? Kids enjoyed a movie shot in the middle of the ocean, just a boy and a tiger,” she said.

“Words are powerful; it could empower or disempower people.”

“How does Philippine media use its power over words to influence the public?” Randy Calsena of the National Council on Disability Affairs (NCDA) posed the question to a room full of media practitioners, advocates, and persons with disabilities (PWDs) during a dialogue held Monday, June 30.

The dialogue was led by the Ateneo Human Rights Center, the Movie and Television Review and Classification Board (MTRCB), NCDA, and the Inquirer.

Globally, over a billion people have some form of disability, the World Health Organization reported.

In the Philippines, 1.57% of the population have disability, the 2010 Census showed.

Some of the problems faced by PWDs, according to NCDA, are inaccessible public transportation and healthcare systems, limited livelihood and education opportunities, poverty, and discrimination – including media discrimination. Zubiaga critiqued how some local television shows misrepresent PWDs. If not as villains, they are shown as hopeless victims, she observed.

She cited “Kampanerang Kuba” and “Darna” as examples. In these programs, the lead characters have disabilities and only become “heroes” when they started having supernatural powers. The women also undergo physical “transformations” which make them more “desirable.”

Zubiaga argued that this reinforces the misconception that PWDs are nothing but objects of pity.

She also cited the show “Budoy” featuring a young man with a mental disability. “It was ok, but why did it have to become a fantasy show towards the end?” Zubiaga asked.

Another TV drama, “Rhodora X,” was critiqued by NCDA. The show follows the life of a woman with Dissociate Identity Disorder.

“It could have been a good show; it can educate the public about mental disorders. But they only made her a villain,” Zubiaga said.

Many Filipinos do not have a tight grasp of disabilities, and the media makes it even more difficult for these issues to be understood, NCDA argued.

“If we don’t kill anyone or perform, are we still newsworthy?” Zubiaga asked.

She quipped that PWDs are only features in the news when Marc Logan of ABS-CBN makes fun of them in his segment.

Raul Pangalangan, Inquirer publisher and former UP Law dean, pushed for the media to make use of politically correct terminology, especially among journalists.

“The person must come first. Say ‘person with disability,’ instead of just calling him ‘disabled,’” Pangalangan said. “Language is very important, it can fight barriers.”

“And disability is only a small part of the person,” Zubiaga added.

Most local news organizations refer to the Agence France-Presse stylebook, which means the terms are in English. Some advocates, however, suggested creating local guidelines so that local TV programs can follow suit.

Pangalangan agreed, but admitted that setting Filipino guidelines is even more challenging.

NCDA also observed that media outlets still use phrases like “suffers from” or “confined to” in describing PWDs – “Psoriasis sufferer, suffers from Down Syndrome, confined to a wheelchair.” Atty Eugenio Villareal, MTRCB chairperson, stressed that the 1992 Magna Carta for Disabled Persons or Republic Act 7277 – which was expanded through RA 10524 – prohibits verbal and non-verbal ridicule and vilification against PWDs.

“This should be observed by the media too,” Villareal said.

Even the country’s legislative terms are problematic, according to Pangalangan. “Our Supreme Court decisions and laws use insensitive language.”

The United Nations adopted the Convention on the Rights of Persons with Disabilities (UNCRPD) in 2006.

The Philippine Coalition on UNCRPD was then formed in 2010, composed of 20 organizations, and representing over 65,000 Filipinos with disabilities. These include persons with visual, hearing, speech, mobility, intellectual, psychosocial, multiple, extensive, and chronic illness disabilities.

The Coalition aims to promote and to ensure that the provisions in the UNCRPD are followed by the Philippine government and enjoyed by Filipinos.

“We are not asking the government for special treatment, but only for them to address our reasonable accommodation,” Zubiaga said.

Many establishments lack ramps, functioning elevators, and necessary facilities. Opportunities are lost because not all schools have braille textbooks, sign language teachers, and proper funding for programs for PWDs. (READ: PWDs and elections)

Advocates also urge networks to provide sign language interpreters for major news. As of now, only TV5 does this.

“For starters, investigate how the government spends its budget for PWDs.” – Rappler.com