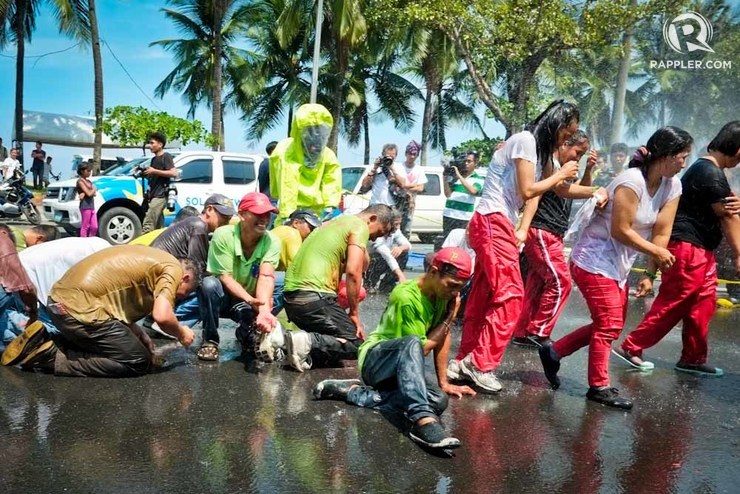 MANILA, Philippines – How would Manila respond if a strong earthquake strikes? What are the loopholes in the city’s disaster response plans?

These questions were answered on Wednesday, July 2, after Manila conducted a city-wide earthquake drill as part of the Office of Civil Defense’s (OCD) nationwide simultaneous earthquake drill.

According to Johnny Yu, Manila’s disaster risk reduction and management (DRRM) chief, around 70% of the offices and establishments in the city, including hotels, schools, hospitals, and government offices – participated in the drill.

At exactly 9:30 am, sirens rang, signalling that a magnitude 7.2 earthquake caused by the movement of the West Valley Fault (WVF) occurred. Two minutes after, the streets of Roxas Boulevard were filled with people who participated in the drill.

The city’s response time was quick. Within 5 minutes after the alarm sounded, firetrucks, and ambulances arrived with officers responding to the needs of the “evacuees.”

But the earthquake brought more than that. Two fires – one in Emerald building and another in World Orient building – occurred some 15 minutes after the quake. 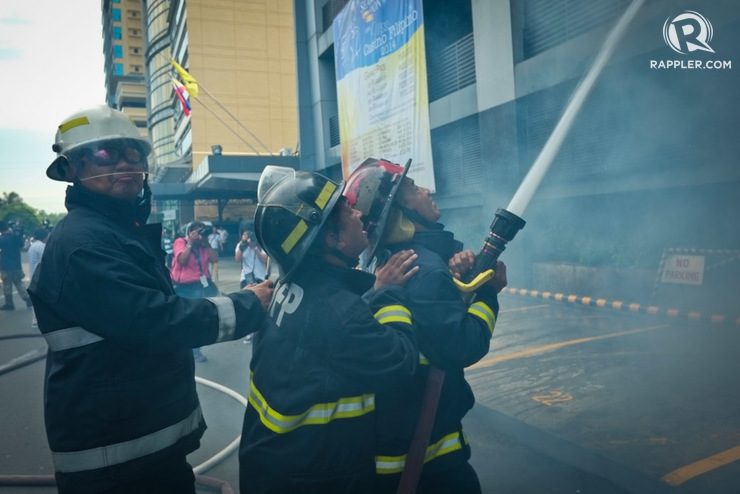 This was raised to the 3rd alarm, meaning all the city’s firefighters and firetrucks were needed in the scene. A “fire out” was declared about 20 minutes after it started.

On the other side of Roxas Boulevard, a bus crashed with a truck carrying liquid nitrogen. The passengers were stuck in the bus. It took more than 20 minutes for the responders to arrive and put on their biohazard suits to rescue the residents.

This is a picture of what will happen if the WVF moves, supported by the results of the Metro Manila Earthquake Impact Reduction Study (MMEIRS) – conducted by the Japan International Cooperation Agency (JICA).

Dr Renato Solidum, director of the Philippine Institute of Volcanology (Phivolcs), said the WVF is a constant threat to Metro Manila.

He stressed the importance of ensuring the safety of buildings and other structures.

“Local governments need to focus on ensuring that buildings and houses have the right permit. If a building has no permit or it is too old, it could be dangerous if a quake strikes. Inspection should be continuous and mandatory,” Solidum said.

Scenario 2: Tsunami caused by a quake

No alarms were raised. At 1:30pm, residents started evacuating buildings and went back some 10 minutes after.

Schools around the city –  including the Polytechnic University of the Philippines, De La Salle Manila, and the Centro Escolar University – also instructed students, teachers, and staff to evacuate to higher ground.

According to Solidum, a tsunami is most likely to occur when the Manila Trench, stretching from the shores of Mindoro to Taiwan, moves.

“Based on our study, it’s possible that an 8.3 magnitude quake will occur if the trench moves. This is our basis for the tsunami simulation that may reach Manila Bay,” Solidum said.

He added: “Since it’s an offshore and not an in-land movement, the intensity that will reach Manila is relatively lower than what the WVF could cause.

But not all residents took the drill seriously. Some were just taking selfies and photos while others did not proceed to the evacuation areas as instructed, local responders said.

Yu said this is a constant problem they encounter when earthquake drills are held.

“Most people only become serious when an actual disaster occurs. This should not be the case. We need to be serious because disasters don’t joke around. Disasters don’t have warnings,” he added.

He noted that personal safety should always be made priority.

“We have to be self-reliant. Our responders are only secondary measures. All establishments and every family need to have evacuation and safety plans,” Yu added.

Simultaneous drills were held in government offices and schools in various cities nationwide. The MMDA office, Marikina City, and Mandaluyong City were among those who held simultaneous events.

The drills did not only test the city’s response capacity and the readiness of the residents but also the existing communication lines between different LGUs.

“We did not test the procedures of all the cities but we tested our communication lines, how we interlinked and connected different cities. If, for example, a disaster hits Manila, how can other LGUs help?” Yu said.

Even with around 3,000 government employees in Manila, Yu admitted that they cannot respond to over 3.5 million Manila residents.

“We are ready. The city government is ready to respond but it’s still not enough…We need all the resources we can get. We need to constantly test our capabilities and upgrade our equipment,” Yu stressed. Yu said preparation starts with the family. Children should learn about proper evacuation procedures and safety tips from their parents.

“When a disaster strikes, the first thing we’ll worry about is our families. How do we ensure our family members’ safety if they’re not prepared? They should at least know the proper evacuation centres so the children will be safe even if their parents are away,” he added.

Yu said there is still much to be done despite the city-wide drill and other preparedness efforts. There is no telling what future disasters can bring, he said. But when the real test comes – when a quake shakes Manila – he hopes the city will be ready.