The story begins with a family of nine: Apolonio Lapuerta Sr, 46, a farmer whose small field of bananas and lemons and small flowering bushes sprawled across a valley crowded by coconuts in Digkilaan, Iligan. Andressa, his wife, pregnant and about to give birth to the eighth Lapuerta child. Angelucia, 16, working as a maid in Manila. Arcel, Apolonio, Algen, Aljon, Analou, Alex, ages 15, 12, 11, 9 and 6 respectively.

It is Friday. The family is in bed, except for 11-year-old Algen, who wandered out with friends. Power is out. The wind smells of mud. 12-year-old Apolonio wakes up to water surging into the small wooden house. There is no time to run. A wave punches through the walls, and then the walls are gone, and the family is thrown into the raging floodwaters. Apolonio finds himself in the dark. Papa is beside him, and 9-year-old Analou, and  6-year-old Aljon. His father shouts for them to climb up a coconut tree. They scramble up, Apolonio first, then Analou, then Aljon, and Papa at the very bottom. It is cold, and he is tired and scared. He cannot hear his father, or siblings, because the wind is howling. He holds on, maybe for 30, 40 minutes. Then the tree breaks. He finds himself another tree, and falls again when the wind breaks the coconut trunk. He is alone in the surging river. He grabs on to a log, and is carried downstream to Purok Dodiongan, three kilometers away from a wooden house at the bottom of a flooded valley.

It is near-dawn in Dodiongan. A farmer plays his flashlight over the banks of the river, looking for the cow that disappeared in the night.

He finds instead a small boy, clutching a coconut log. The farmer takes the boy with the bleeding ears home.

Benito Lapuerta was born in Cebu City. He brought his family to Purok Mangga in Digkilaan in 1982, and became a tenant of lands owned by the Abragon family. The family planted bananas and corn. In his 60s, he lives in the highlands of Purok Mangga, with his children and their families nearby, his son Apolonio Sr in the lowlands with his wife and family of seven.

On the morning of Dec 17, 2011, after Benito and his family crouched in their homes as the typhoon lashed against roofs, the family went down to the valley to seek out Apolonio. Only, the house is no longer there, there is only a swath of wet chocolate mud and mounds of shredded wood. Chunks have been torn out of the valley walls, there are trees caught in the slide of soil. The plantations have been leveled flat. Coconut trunks are strewn like toothpicks on the valley floor.

Benito begins searching. His sons search with him. They find 15-year-old Arcel nearby, in Ronay. She is buried the next day.

Then the word is passed on. A little boy from Purok Mangga was found down the river.

It takes three days for Apolonio’s uncle Jobelito to find his way to Purok Dodiongan. The roads are impassable. The water takes days to recede.

When he comes home, Apolonio Jr is with him. The boy talks of floating in water, of sun and clouds and warm rice and dried fish and a concrete house, and of the farmer who wiped the sand from his bleeding ears. On December 17, a radio announcer put out the story of a nine-year-old girl found floating in Panguil Bay, Bacolod, Lanao del Norte, a full 30 kilometers from Purok Mangga. The girl was taken to the Iligan City Hospital. Her name is Analou.

She is bruised when her grandparents find her in the hospital. She has been vomiting mud. She does not cry. She says very little. She draws logs, and water, and red houses. When Analou La Puerta fell into the water from the coconut tree her Papa told her to climb, she climbed up a slab of wood and held on as it shot down the Mandulog River, passing under three bridges and into the sea. The waves were high. The water was cold and muddy. She saw a man, or maybe a woman, clinging to a piece of wood. She saw a cow paddling out to sea, head bobbing above the water. She saw another small girl, thinner than she was. She saw a pig on a plank, a floating television, and trees, many, many trees.

And then there was a snake, she said, a yellow snake that slithered up her piece of wood. She let go and found another, and slept as she drifted.

She says she never cried.

Analou is back in Purok Mangga, after a week confined in the city hospital. Her grandmother Lucia brought her home last night, walked and walked for miles to bring her home to the house in the highlands above where her father used to plant his flowers. Apolonio still cries, but his grandfather holds him still.

Apolonio is deaf in one ear. Analou sometimes smiles.

The story begins with nine. Now there are four. Papa and Mama are gone. So are Ancel, Aljon and Alex. Angelucia is in Manila, 11-year-old Algen, whose night away from home saved his life, is still with neighbors. 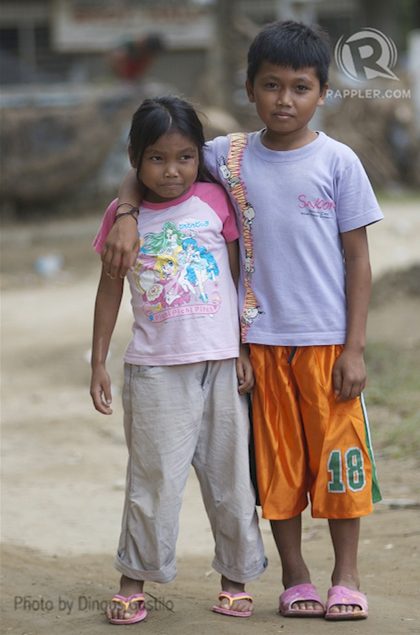 This is a story that will begin with four. Benito, Lucia, Apolonio, and Analou. They will begin again today, and begin everyday, like every other family who woke up on a Friday night to face a surging storm. – Rappler.com