Jul 9, 2014 6:29 PM PHT
Erwin S. Fernandez
Facebook Twitter Copy URL
Copied
'Dynastic politics is the curse of this nation and an intelligent president, whose interest is the nation, should support the Anti-Dynasty Bill in order to destroy all the stranglehold of the elite in Philippine democracy.' “Must (the Kabataang Barangay) be headed by the president’s daughter?”

A 21-year old spirited Mapua student by the name of Archimedes Trajano (1955-1977) asked this question before Imee Marcos, chair of the Kabataang Barangay (1975-1986), after the latter addressed a crowd at a university in Manila.

That bold question, which cost his dear life at the hands of Imee’s security escorts, spoke loudly of the impropriety of one family to hold various positions in government, whether in the form of political dynasty or nepotism.

There is something evil and morally detestable in political dynasties contrary to what has been asserted.

While there is nothing inherently wrong in sons following their fathers career-wise, it is so when they are forced to join politics or encouraged to do so to maintain their wicked ascendancy.

It is lamentable that by encouraging their sons or daughters to become politicians like themselves, they rob them of the good opportunity to become professionals in other endeavors where their talents are above par.

What the Philippines needs are more writers and authors, more engineers, more scientists, more entrepreneurs and technicians and less and less of the ignoble politicians. 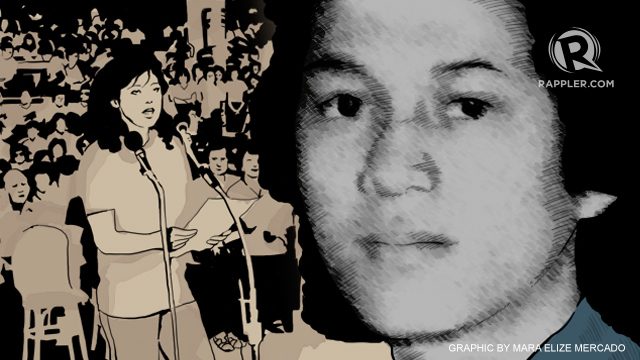 I reserve my greatest contempt to those wives or sons who follow their politician-husbands or politician-fathers.

Whether they are good families with outstanding public service or not, whether they are qualified or not, their motives for running for public office is always suspect and they knew that educated people among their constituencies deplore them privately.

“Sikara lamet?” (Them again?) “Ag ira kuntento? (Are they not contented?)”  “Masiba ira.” (Their greed knows no boundaries.)

And so on and so forth.

But the politician-heir, besides either wilfully ignoring the constitutional prohibition or outright ignorant – endorsed by equally naive or lenient supporters who are aware that this is tolerable in light of what is really happening in the community and in the entire country – will still run, thick-faced, and secure their victory.

But not without resorting to threat to the other side, vote-buying and all the nefarious practices common in Philippine elections since the 1897 Tejeros convention.

Following the war, elections at the national level meantr pitting dynastic politicians but not as severe as it is now.

It began in 1946 with Vicente Y. Sotto as senator whose brother Filemon Y. Sotto was once a senator in the pre-war Senate.

What followed were the elections of presidential brother, wife or sons to the Senate in the senatorial elections in 1961 of Genaro F. Magsaysay, brother of President Ramon F. Magsaysay and of Gaudencio Antonino who was replaced by his wife, Magnolia W. Antonino, upon his death prior to the 1967 elections, and in 1965 of Sergio Osmeña Jr., son of President Sergio Osmeña Sr., of Gerardo Roxas, son of President Manuel A. Roxas, and of Benigno S. Aquino Jr., son of former Senator and Speaker of the wartime National Assembly Benigno Q. Aquino Sr.

At the provincial level from 1946-1963, in a careful study by Dante Simbulan, dominant families assumed posts in the executive, legislative and judiciary.

Each of these families had vital stakes in business, land and in the professions.

Then the worst period came.

“The Marcos Dynasty,” the title of a book by Sterling Seagrave, documents the rise to power of the “conjugal dictatorship” as the still missing Primitivo Mijares aptly called their connivance with the White House, Pentagon, CIA and American business and crime syndicates.

Until we arrived at this present mess.

In any case, how can the incumbent president certify the urgency of the bill on anti-political dynasty that should have been passed a long time ago during his mother’s presidency when he, himself, belongs to a traditional political clan in Tarlac?

How can he do that when his uncle, Agapito Aquino, started this trend for national elective positions in 1987 after EDSA – a time when his mother was in power – and followed by his cousin, Bam Aquino, when he is in power?

Dynastic politics is the curse of this nation and an intelligent president whose interest is the nation, not the 2016 elections, will fully support the passage of the bill into law using all his resources to destroy once and for all the stranglehold of the elite in Philippine democracy.

But does an emasculated bill which will allow two members of a family to hold office simultaneously answer the need to totally dismantle political dynasties?

Absolutely self-serving, it will further entrench these families.

While a scenario in which Congress is planted with a ticking time-bomb or held hostage by gun-toting patriots who are fed up with this corrupt system and demand the passage of this bill – including the Freedom of Information Act – is highly unlikely, it is only through this desperate situation that they will be compelled to comply with their constitutional mandate.

They are dilly-dallying for so long. Their pockets and bank accounts had amassed stolen wealth.

Will these congressmen wait for this to happen before they act?

Let us remember Archie who, in his raw youth, spoke truth to power. – Rappler.com

Erwin S. Fernandez is an independent political analyst based in Pangasinan with his own research center, the Abung na Panagbasay Pangasinan (House of Pangasinan Studies).