Our Pinoy waiter at the fancy hotel

Jul 24, 2014 9:45 AM PHT
Shakira Sison
Facebook Twitter Copy URL
Copied
I could tell that Conrado was a legend at his job at that $800/night hotel on Fifth Avenue. I am pretty sure that he's encountered some high-profile Pinoys who probably didn't even say hello'

His name was Conrado. We were 4 Filipinos among a group of 6 who made it to that hotel bar on a rainy Friday night. The two non-Filipinos with us mistook his name for Coronado. He didn’t mind it but I cringed when I heard it, so I corrected my friends and said, “It’s Conrado, not Coronado. That means ‘crowned’!”

He looked like a tan Joe Pesci, so I never would have thought he was Pinoy. His minor accent led my friend Maloy to say, “Kamusta?” (How are you?) to which he answered, “Mabuti,” (Good) and our eyes lit up. Maloy said she knew he was Pinoy because he had the same name as her uncle, and so I treated him like my uncle as well.

Conrado was shy at first and spoke Tagalog under his breath. I assumed that it was probably not a great thing for hotel staff to be laughing in another language with guests. He warmed up after learning that Maloy was also from Bulacan. They spoke about his town of Hagonoy, which is a few minutes from Maloy’s town of Marilao.

We were only there for dessert and nightcaps as we came from another dinner, but Conrado brought us an assortment of nuts and warm olives. When we ordered a second round of port, he brought the wine bottle to our table and gave us an extra pour.

“Ang konti kasi magbigay nun e,” he said, pointing his lips at the bartender. (That guy gave you so little wine!)

I was reminded of the popular notion about Filipinos that our greetings are always followed by an offer to eat. “Uy kamusta? Kumain ka na ba? (Hey, how are you, have you eaten?)” is almost our universal hello. It meant even more coming from Conrado, who transformed before us from a respectful, agreeable waiter, to our kababayan who suddenly gained a spring in his step, plus a warm and genuine smile that almost made me call him “Tito.” 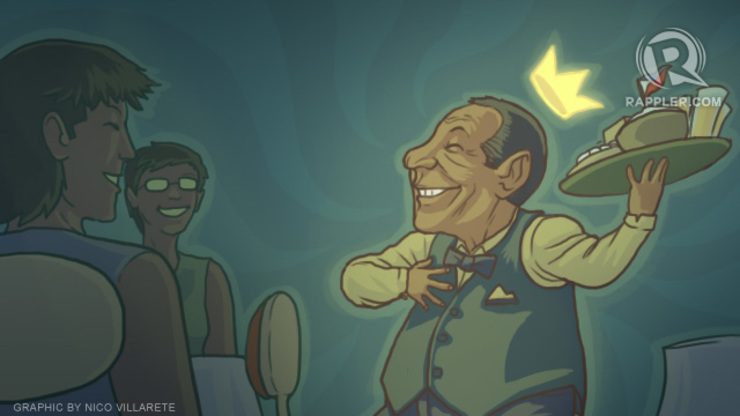 Conrado returned with a tray of sandwiches and plates of dessert. He asked where we were visiting from, and upon learning that we lived in New York and that some of us lived in his Filipino neighborhood of Woodside, Queens, he started becoming more comfortable, almost like family, but never intrusive.

The 6 of us had just come from a very heavy dinner and couldn’t eat anymore. Still, in our embarrassment at Conrado’s graciousness, we tried to at least make a dent in what he served. By the end of the evening we were all full, tipsy, and feeling warm in our hearts. We touched Conrado’s shoulder and said our thanks, leaving him a generous tip.

“Ang bait naman ni Manong,” I said to my friends as we were about to leave. It was that kind of joy one felt in another country when they came across a fellow Pinoy and can approach them without hesitation.

In a city of 9 million people, it was easy to disappear as a person along with one’s culture and language. It’s always refreshing to receive a kind gesture from a countryman that seems to say, “I know you. I know what it’s like.”

I could tell that Conrado was a legend at his job at that $800/night hotel on Fifth Avenue. I am pretty sure that he’s encountered some high-profile Pinoys who probably didn’t even say hello. I felt guilty that if Maloy didn’t recognize his accent or his name, I might have mistaken him for an Italian or a South American server and wouldn’t have made conversation.

I was so grateful that I met a fellow Filipino that night. Having lived in New York for a while, I’ve met quite a few who would rather not be acknowledged for their heritage. Perhaps they want to be more than just that, or they would like to blend in. Maybe sometimes they want to pretend they’re not brown, so they hate it when someone points out that fact. But not this guy.

We burped and yawned and bid farewell to a fun night among friends. As we were leaving, Conrado leaned over to us and whispered, “It’s pouring outside. Downstairs there is a Filipino doorman named Vicario. He will give you a free umbrella if you ask.”

We walked out feeling touched by his gesture, plus his additional offer of hospitality.

“Coronado was so nice!” my Korean friend said, and this time I didn’t correct her, even if that meant my new friend had a crown. Conrado, the soft-spoken server in that fancy hotel who gave us some of his time and heart, was definitely crowned the king of my night. – Rappler.com

Shakira Andrea Sison is a Palanca Award-winning essayist. She currently works in finance and spends her non-working hours looking for invisible Pinoys in subway trains. She is a veterinarian by education and was managing a retail corporation in Manila before relocating to New York in 2002. Her column appears on Thursdays. Follow her on Twitter: @shakirasison and on Facebook.com/sisonshakira.