Looking back at the 2013 CDO bombing a year after

Jul 26, 2014 9:00 PM PHT
Robert De La Serna
Facebook Twitter Copy URL
Copied
A year after the blast that killed 8 people in Cagayan De Oro City, one of the survivors gives his account of what happened that fateful night This is my account of the Big Bang – its beginning and what could also have been my end. (READ: Blast in Cagayan de Oro kills at least 6)

Well into our consumption of two buckets of San Mig Light, Jude excuses himself from our table, to go to the rest room. Our table is set up al fresco on the sidewalk shoulder fronting Candy’s Bar at The Party Strip of the Rosario Arcade in Limketkai Center in Cagayan de Oro City. Seconds after he heads for the door, an overpowering blast rocks us from behind.

Erwin and I are jolted from our seats.

“What was THAT?!?” Erwin turns to me, his face one big question mark.

Firecracker? I surmise, though thoroughly in the dark as he is. But if anything, this one delivers a far more lethal punch than the strongest “Bin Laden” firecracker I’ve heard lit up on New Year’s Eve. Oddly enough, the crispness of the blast approximates more closely the ferocity of a whip crack – a humongous whip crack!

The ripping sound mutes the mishmash of noise that had, until then, blanketed us. In an instant, the place is gripped in paralyzing terror, the crowd seized in suspended motion, the hands of time, momentarily fractured.

Then we hear a cymbal of glass crashing to the floor as the classy glass doors and glass panels break into smithereens. Down the road, car alarms squealed in shrill agitation.

The cacophony jars us out of the terrifying spell.

People are skittering about, pushing chairs and tables aside as they scamper towards the main road. There is shouting, a lot of crying. I hear a din of whispers, or were they prayers? Under the dim light of The Strip, a blur of familiar faces hurtles past us looking visibly pallid, except for one whose head oozes with blood.

Did I say blood?

I cuss when I realize the horror that has spirited us out of our wits. My hands instinctively feel around my body parts to check if pieces of shrapnel may have pierced through. Head: OK. Spine: OK.

A big existential question runs through my head: How do we know for certain that we are still alive?

I hear Descartes flit in my head. “Try philosophy: Only the living can philosophize about death. Cogito ergo sum. I think therefore I am.”

Erwin snaps me out of my cogitation,“Bert, we need to move to the street. There might be a second explosion.”

We realize then and there that our trouble is far from over.

Jude, Erwin, and I had earlier agreed to meet at Loreto’s for our regular TGIF workout. Tonight, we were going to focus on our abs – that is: acoustic, beer, and sisig.

I arrived at Loreto’s ahead of them. But to my surprise, it was unusually a full-house crowd, and the band –  it was pumping retro-70s. I rang up Jude and Erwin and convinced them of a change of venue. “Abort. Too noisy. We can’t hear our sisig sizzle.” Jude suggested the usual – meaning, another favorite hangout at JR Borja Extension. We decided to meet there instead, since he was about to pass by the place anyway.

“Full as well.” Jude advised not a minute too soon.

“What’s in Cagayan?” I asked. We were both clueless.

Erwin, who picked me up at Loreto’s minutes later, suggested that we head to Candy’s for the ice-cold beer. Never mind if they do not serve sisig, or nachos, or smoked sausage, for that matter. We were certain that on Fridays like this, the place would have ample seats since its usual crowd has moved out, trying out the newer establishments that have been popping up like mushrooms elsewhere in the city. 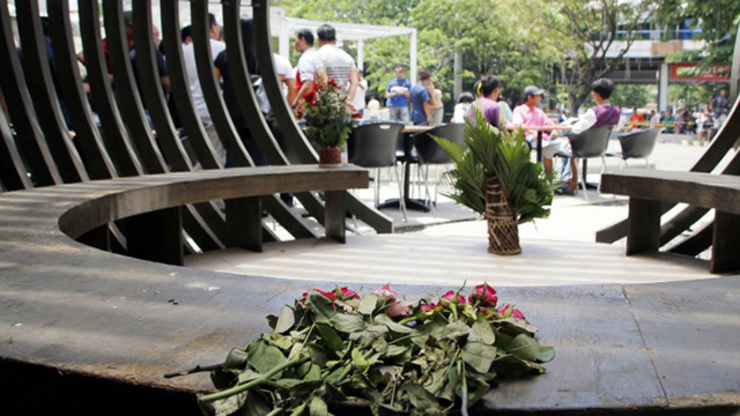 It was nearly 10 pm when Erwin and I arrived at The Strip. It was a virtual sea of empty chairs and tables set up al fresco outside of Kyla’s, Candy’s, and BFB – 3 adjoining resto bars pooling to offer an acoustic band.

Normally, our group would have settled for a table at the balcony section of Candy’s, where a glass panel demarcates its border with Kyla’s. But since I thought I heard the band play a favorite song by The Script, I grabbed a chair strategically plopped next to the pedestrian walk of the establishment. Erwin followed suit. Shortly thereafter, Jude arrived. Our spinach pizza was served some minutes later.

By 10:30 pm, the crowd began to swell up. The tables behind and next to us have now been occupied. At the far end of Candy’s, we thought we saw Jose, a Manila-based batchmate and occasional drinking buddy who works for a pharmaceutical company. It must have been serendipity that allowed us this case of mistaken identity, for then we also learned why Cagayan de Oro was unusually populated on this evening: the city is host to a national convention of medical doctors.

Two buckets of San Mig Light later, Jude excused himself to take a leak inside Candy’s. The explosion took place seconds after he left our table. We clocked it to be around 11:17 pm.

“Si (Where is) Jude?” I turn to Erwin amid the mayhem.

Some 3 meters from where we stand immobilized, we espy a body lying prostrate on the pavement by the edge of the first table at the balcony. Strangers are milling about, frantically trying to revive the slumped person.

“Si Jude?” I ask Erwin again, to ascertain if the body we see is his.

We take another glance at the person. Jude may be big, all right, but he definitely does not have the bouncer’s size of the fallen guy. If this isn’t Jude, he must still be out there.

“Si Jude?!?” I keep asking. I ring up his mobile and he does not answer. Panic sets in. My mind is racing for an apology to issue to his wife and son in case we are confronted with his loss.

I run towards Candy’s to check on our friend but stop at the entrance, chastened by the sight of broken crystals on the floor, or what remain of its glass doors. I stride inside, rush to the toilet, and do not find Jude. A group of customers huddles in one corner of the restaurant, their faces in all shades of shock.

As I step outside, I see the solitary figure of a man sitting in reverential silence next to the doorway. I pause to look at him. The sight stumps me: I see his head knocked on the table, fresh cold blood dripping from his face; a puddle of crimson stain forming on the floor. I am seized with malaise, not knowing whether to approach him, feel his pulse, ask for his name, and comfort him.

But the imagined whisper of comfort never escapes my mouth. I am rendered speechless. 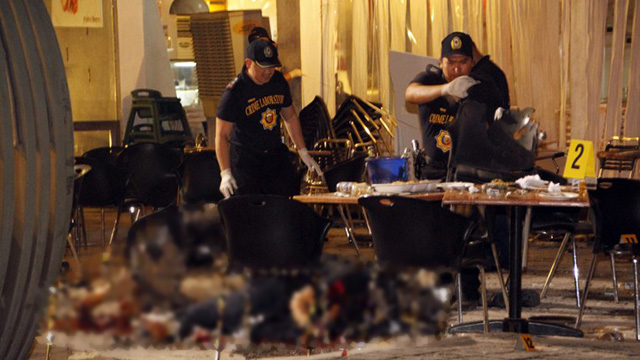 Erwin interrupts from a distance; his shout breaks me out of my trance. “Bert! Come here! Come to the street! There might be another explosion!”

With a pang of guilt, I retreat from the dying man and scuttle for my own safety.

As I approach Erwin, I spot a lady standing alone in the middle of the balcony, visibly shaken. I stop to ask if she is in any way related to the guy lying on the pavement, “Kaila nimo? Kaila nimo?” (Do you know him? Do you know him?) She does not answer, perhaps, herself unable to make sense of my own incoherence.

Erwin pulls me towards the main road, where we get a safe view of Ground Zero some 20 meters away. A private van moves into Kyla’s. We see a flurry of movements: shadows carting a victim into the vehicle; figures dropping on their knees, wilted by the terror, perhaps also in prayer; silhouettes of survivors moving gingerly, tentatively to collect their senses.

I train my gaze towards the center of the blast at Kyla’s but dread to imagine the blood and gore that lie there. In my stupor, the vicious sound of the deadly whip crack haunts me back. BANG!!! It reminds me of the ephemerality of life how it can be snuffed out like a flame from a candle, just like that. (READ: Report: BIFF ‘most likely’ behind CDO bombing)

A familiar face approaches me.

“Jude, I’ve been trying to call you!”

The 3 of us leave the place before any of us realize we are now what the news reports would later call survivors. – Rappler.com

Robert de la Serna is a number cruncher by academic training.  He, along with the families of 8 dead victims and 46 other injured, is still awaiting the resolution of the case for closure and accountability 365 days after the incident. Contrary to news reports, no terrorist group has, to date, actually claimed any responsibility for the terrible act.