Still no mention of FOI law in Aquino’s 2014 SONA 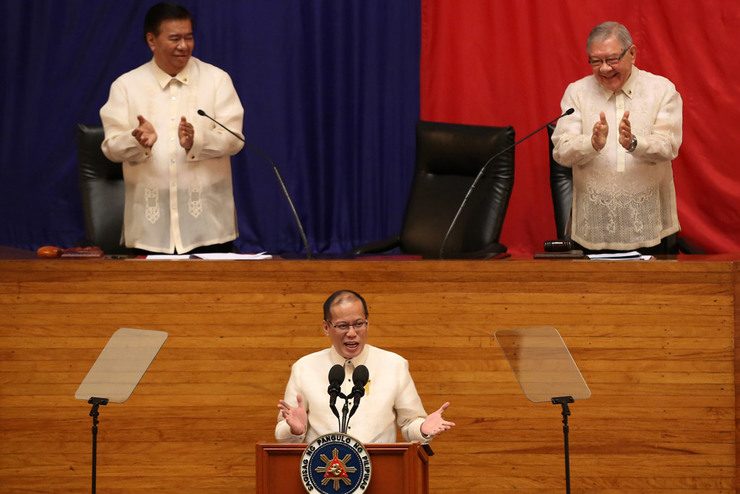 Facebook Twitter Copy URL
Copied
With the President still lukewarm toward the FOI bill, will Congress eventually approve it?

MANILA, PHILIPPINES – President Benigno Aquino III continues to snub the Freedom of Information (FOI) Bill as he neither mentioned nor certified the bill as urgent in today’s State of the Nation Address (SONA).

Marking a bill urgent or at least mentioning it during the SONA is an indirect call for lawmakers to support the bill – assuring it of swift passage in both houses of Congress.

But this is not the case with the access to information law. For the past 4 years, President Aquino has never cited the FOI Bill in any of his previous SONA speeches despite clamor from civic groups and international organizations.

The administration says it considers the FOI bill as “an integral element” of the Aquino administration’s Good Governance and Anti-Corruption Plan 2012-2016.

Shortly after the Supreme Court released its ruling on the Disbursement Acceleration Program, the President promised businessmen that the FOI bill will pass before the end of his term in 2016.  But he says marking it as an urgent measure would require an emergency situation.

“I regret I cannot certify it as urgent because the Constitution requires an emergency,” said the President, “but the assurance I think should be given, at this point in time, that it will be passed before the end of my term.”

The access to information bill is considered as one of the cornerstones of the global battle against government corruption. Many cases in countries with FOI laws have proven the law’s capacity to help expose instances of corruption in high places.

One of the most significant of these cases involved the release of detailed travel expenses of parliamentarians in the United Kingdom.

Occurring immediately after the United Kingdom’s Freedom of Information Act came into full effect in 2005, the case started when a campaign manager and two reporters filed requests to access ministers of Parliaments’ travel expenses.

This request was immediately denied.

The 3 filed an appeal with UK Information Commissioner Richard Thomas, who asked to view the data and evaluate whether it should be released or not. In 2006, he was able to do so with permission from Parliament.

In 2007, together with the Information Tribunal, Thomas released a ruling to publish a breakdown of the expenses.

After a continuous tug-of-war with ministers who tried, albeit in vain, to hinder the release of official records, a list touted as the “John Lewis list” came out.

The data was shocking.

A comprehensive travel expenses list was published, showing cases of fraud, misuse of permitted allowances, and issuance of fake receipts committed by MPs. The disclosure triggered resignations of key officials, filing of cases, sanctions, and a strict independent body was created to oversee the expenses of the MPs.

The battle was landmark for the freedom of information (FOI) law as it did its mandate: reveal government records and expose cases of corruption.

The use of access laws to enlighten such acts did not only happen in the United Kingdom. Other countries have likewise invoked FOI laws to reveal discrepancies in government finances as well as power plays.

In 2005, a local non-government organization in India revealed that more than 80% of subsidized food rations under the Targeted Public Distribution System (TPDS) are being sold to black market groups.

These backdoor illegal deals committed by distributors forced poor recipients to buy goods at regular prices. Through India’s newly-minted 2002 Freedom of Information Bill, non-government organizations obtained copies of distribution records, exposed the corruption, and resulted in the overhauling of the TPDS.

India passed its Freedom of Information law in 2003 while the UK implemented its 2000 and 2002 access to information law in 2005. Both late adopters, these two countries have had numerous FOI success stories, ranging from controversial bribery claims to personal issues such as the granting of pensions.

In Denmark, the recently concluded Taxgate Scandal shows how using access laws could reveal power plays in the government. The scandal is grounded on the alleged attempts to influence the outcome of a tax audit hurled at current Prime Minister Helle-Thorning Schmidt in 2011.

Unlike India and UK that has younger laws, Denmark’s FOI law dates back decades ago to 1985. Like its fellow Nordic countries, Denmark has an advanced and very open access to information law that allows for full disclosure of exchanges between officials.

The UNCAC identifies transparency and right to information as effective indicators in pushing for government accountability.

With the World Bank additionally saying that tackling corruption is crucial to poverty reduction, many countries have adapted access to information laws in their anti-corruption crusades.

Will Congress approve it?

Despite this neither hot nor cold stance from the President, supporters of the bill, in both houses of Congress, have consistently pushed for the passage of the country’s access to information law.

In March 10, 2014, the Senate passed the FOI Bill after third and final reading. A counterpart bill in the House of Representatives (HB3237), is currently under the technical working group that promised “to expedite” the bill’s passage.

According to Camarines Sur Third District Rep. Leni Robredo,  a liberal party member, the lower house is currently discussing the list of exceptions.

Talks on the FOI bill are the expected to resume following the President’s 5th State of the Nation Address and the reopening of Congress.

But with the President still lukewarm toward the bill, its passage remains unclear. – Rappler.com