Jul 30, 2014 4:50 PM PHT
Facebook Twitter Copy URL
Copied
'Our OFWs shall be more than happy to be part of delivering solutions rather than discovering faults. Can we not be authors of reforms, too?' My favorite speechwriter, Peggy Noonan, who wrote President Ronald Reagan’s best speeches, once said, “Every speech has a job to do.” That “job” relies heavily on what the speaker wishes to achieve, given the circumstances of the times.

Pre-SONA, the media has been collating all sorts of feedback on what the fifth State of the Nation Address should be about. Among overseas Filipino workers (OFWs), there was a dose of cynicism about this year’s State of the Nation Address (SONA), given President Aquino’s failure to mention them in previous ones. I am sure other sectors have their own running bets on the inclusion or omission of what they perceived as urgent concerns. The plethora of answers reflect the confusion of the times and the huge demands on the presidency.

There is much to mention on the OFW front: alert levels have been raised by the Department of Foreign Affairs for our OFWs in Iraq, Gaza, and Libya. The repatriation of OFWs trapped in war-torn Syria continues even as so many other embassies have pulled out their staff. In Saudi Arabia, we have workers on death row, seeking help from the Philippine government to raise the blood money needed for their lives to be spared. Human trafficking remains a global and domestic concern, with Filipinos exiting through porous borders as money exchange hands between traffickers and local authorities. Oh and will the President also address the issue of embassy personnel taking advantage of vulnerable women in our shelters abroad?

Fast-forward to the SONA.

(Perhaps, given the Filipino people’s readiness to render assistance to the best of our abilities – a characteristic embodied by our OFWs, peacekeepers, and all our other countrymen abroad – when the world saw that we were in need, they saw fit to come to our aid. Today, we express once more our gratitude to all of you, and to all the Filipinos who have offered their prayers and their support, whether here, or in other parts of the world) 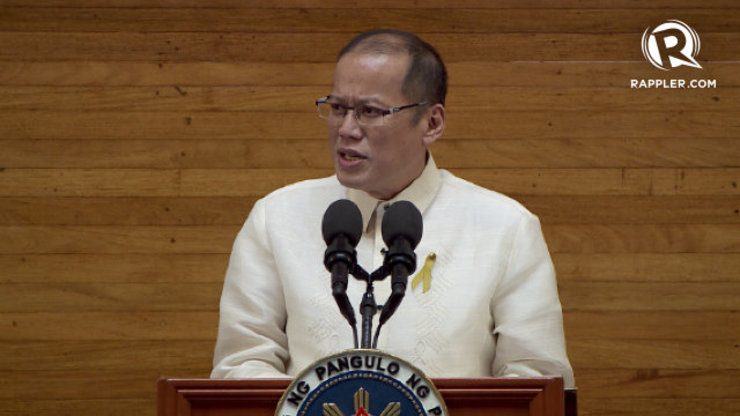 Seconds after PNoy uttered those lines, friends texted and “PM-ed” me on Facebook: “O ayan, nabanggit na ang OFWs.” Hanging in the air are questions such as: “So, are you happy now? Was that enough?”

Day after SONA: It was a holiday celebration to mark the end of Ramadan. My staff and I went to Pampanga to meet an OFW who just came home from Syria. How did you ecape, I asked her? Her employer was an old lady from a well-connected family who enjoyed slapping our “kababayan” for kicks. She said the Philippine Embassy in Damascus sued her agency that in turn pressured the Syrian employer to release her. It took months to bring her home, especially after her mobile phone was cut off, and her employer refuses to cooperate.

Had I written this article immediately after the SONA, my focus would have been on the speech, all 48 pages of it.  My OFW friend, deeply traumatized and vulnerable, offered me a different perspective on how I should view the SONA. The SONA is a speech – nothing more – though its weight in history cannot be ignored. For every sector, government agency, and individual mentioned, so many others were not. It is what it is – a speech has to end sometime.

What is important is that two departments – the Department of Foreign Affairs and the Department of Labor and Employment – continue to send out teams to help repatriate our workers in conflict zones, at great risk to the lives of these responders. Among them are veterans of previous conflicts, quiet and decent civil servants who are now tasked to bring our own modern-day heroes out of harm’s way. That the President failed to mention them does in no way diminish the value of their work, nor the courage in their hearts.

What would also be laudable is for transparency principles to reach overseas Filipinos through online reporting of funds and programs for OFWs. We can start with each embassy posting how much in legal assistance funds have been extended and for what kind of cases. OWWA has its own reportorial considerations to their own bosses, the OFWs who actually own the fund.

What we yearn for is for improved customer-service for our OFWs and their families, not because of their “modern-day heroes” label, but because of the exigencies of work that make them even more vulnerable and susceptible to red tape and rude behaviors.

These were not in the SONA, and I’m sure there were other sectors that felt aggrieved by such neglect. To them, the speechwriters and yes, even the President can cite the doctrine of good faith, with an apologetic smile. (READ: Mood Meter: Angrier with Aquino SONA in 2014)

On a broader scale, what is critical is that our economy rises to the apex of our collective dreams, and we start looking at ourselves as global competitors, not perpetual victims of a less than grandious past. Mediocrity is also a state of mind.

My take-away from the President’s SONA is that we are all in this together. The “job” of the fifth SONA is to renew the trust and make people feel proud of the accomplishments that the administration has done.

For me, the fifth SONA is the most unexpected one. We have gotten so used to a president that says what he means, no matter who gets hurt. Now, we have a new PNoy – a less combative, and more human one. No stinging rebukes, no shaming of people-right-in-front-of-his-nose. How long would it last? I don’t know. But I like this new version better. Without it, the outcome of the speech would be vastly different. Would this softer, more accessible side reveal itself if his ratings were still sky-high? I leave that to the pundits to answer.

PNoy is the glue that binds all these reforms together. What rankles is when his administration appears to gloat about perceived and asssumed excessive accomplishments as if they are messiahs that can do no wrong. Our country is far from saved. Reforms will always be a work in progress. We are all in this together.

The fifth SONA was unexpected because of the humility that cradled it – from the choice of videos to the President’s own acknowledgement of mortality.

In saying an early goodbye, he was perhaps signalling to us how critically important the 2016 elections is.

In talking about his parents, he was assuring us that he takes their legacy seriously.

To the people around President Aquino, here’s my humble request: “Don’t botch this. Use the post-SONA period as an opportunity to likewise bow down to your bosses, and convert the rhetoric to something more real and apparent.”

Kung si Pangulo nga, nagpakumbaba, kayo pa? (If the president can humble himself, why can’t you?)

Amid all these reforms, mistakes are bound to happen. You don’t push around boulders and think of not getting hurt or hurting someone in the process. It is what it is. What I miss is not the statesmanship, because that may not be in all of us. I miss the grace, humility, accessibility of those in power – if we are their bosses, then why do we feel constantly being talked down to instead of raised up?

The fifth SONA did its job. The question is, what now? If I were in the presidential team, I would seize the moment and bring the post-SONA discussions directly to the people. How can we solve more problems (from big to small) in the two years left, I would ask.

Reforms should be exciting, as they are painful. I would like to think that what we need are for more ideas to be heard, from outside the compartamentalized, rigid structures of government. Go where the dreamers are.

Crowdsource solutions, draw the people back in, broaden the discourse. Inclusivity can mean a lot of things. Social media provides virtually free platforms for engagement.

Our OFWs, exposed as they are to foreign cultures, infrastructures, and technology, shall be more than happy to be part of delivering solutions rather than discovering faults. Can we not be authors of reforms, too?

The President has spoken. Perhaps it is the turn of the bosses to also speak, and be heard. Who knows? Perhaps we can also teach those in power a thing or two, all in good faith, of course. – Rappler.com

Writer and OFW advocate, Susan Ople was last year’s recipient of the Trafficking in Persons Hero Award from the US State Department. She has a weekly column in Panorama Magazine, Tempo, and Arab News. Her non-profit organization, the Blas F. Ople Policy Center, assists distressed OFWs all over the world.