Aug 6, 2014 3:47 PM PHT
Angela Casauay
Facebook Twitter Copy URL
Copied
The proposed 2015 General Appropriations Act seeks to allow the president to declare as savings funds for projects that have not started by mid-year, and to realign such funds 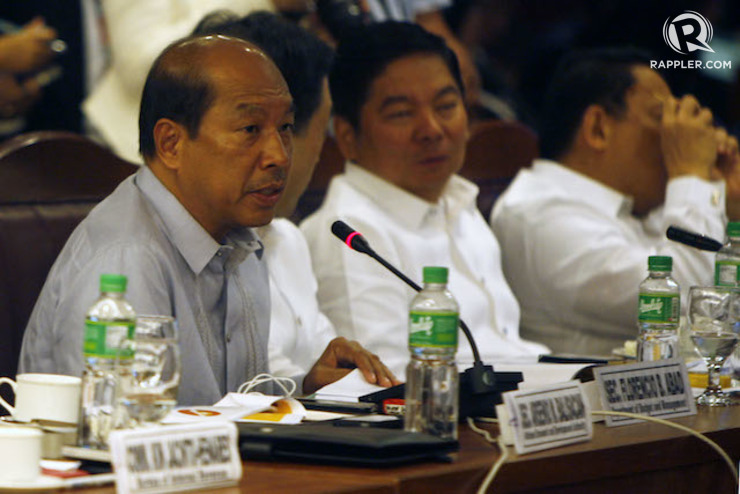 Abad made the statement as government economic managers endorsed the proposed P2.606 trillion ($59.57 billion*) General Appropriations Act (GAA) for 2015 before the House committee on appropriations.

During the hearing, Bayan Muna Representative Neri Colmenares, who is Deputy Minority Leader, grilled Abad on provisions in the proposed budget, which, the lawmaker said, resurrects powers similar to those used by the executive branch under the now discontinued DAP.  (READ: Where did DAP funds go?)

“Why is there a need to redefine savings when Malacañang says DAP is finished and not needed anymore?” Colmenares said.

It is because the Supreme Court introduced “rigidities” in how savings are defined, Abad said.

“We are not the ones who changed (the definition of savings). It was the Supreme Court. That’s why we’re going back to the Congress to review this position.”

Asked whether provisions defining savings are intended to “cure” acts under the DAP declared unconstitutional by the High Court, Abad said, “In the past, if the rules have not been as precise, then we’re coming (to Congress) for a precise definition.”

After the Supreme Court struck down parts of the government’s controversial spending program as unconstitutional, the executive branch has moved to propose changes to Congress on how to define what would constitute “savings.”

Under Section 67 of the general provisions of the proposed 2015 budget, the executive branch will be given the power to declare as savings, unused funds as a result of the following:

Malacañang also wants the definition of savings to include unused funds arising from unfilled, vacant or abolished positions; non-entitlement to allowance and benefits; and leaves of absence without pay.

Colmenares raised concerns over the proposed provisions that allows the president or the executive branch to stop a project and declare as savings funds originally intended for it.

“My problem here is this can even be done any time,” Colmenares said.

Abad said Congress is free to define the parameters of the proposed scheme.

“There is a standard, which is justifiable cause, and Congress can further define that. I think what is important is that it’s not arbitrary,” Abad said.

The lawmaker also questioned proposed provisions that would allow the president to declare as savings funds for projects not implemented by June 2015, and to realign these funds.

“Does it not grant greater powers to the President to realign the budget by the middle of the year?” Colmenares said.

Abad said the intent of the proposed provision is to mandate government agencies to start the procurement process for 2015 as early as August 2014.

Since the average procurement period is 6 months, this would enable agencies to commence their projects within the year. The proposed 2015 GAA also includes a provision prohibiting agencies from carrying over unused allocations to the next year.

“The real intention is to make sure at the earliest possible time we are able to deliver social services promptly,” Abad said.

Aquino allies at the House and at the Senate have filed separate bills proposing that the executive be allowed to declare savings by June 2015 – consistent with the proposed 2015 GAA.