Jun 11, 2012 4:27 PM PHT
Facebook Twitter Copy URL
Copied
The original lyrics of the Philippine national anthem were in Spanish, then translated into English, before sung in Filipino after 1956

MANILA, Philippines – The lyrics of the Philippine national anthem, Lupang Hinirang, were originally written in Spanish, later translated into English and finally into Filipino only in the 1950s, before Republic Act 8941 established by law that it can only be sung in the national language.

Very reminiscent of the Himno de Riego, the national anthem of the short-lived 1st and 2nd Spanish Republics (1873-1874 and 1931-1936), the first title of the original hymn without lyrics composed in 1898 by Julian Felipe was Marcha Filipina Magdalo. It was named after the group of revolutionaries led by Gen Emilio Aguinaldo who fought the Spanish colonizers and founded the 1st Philippine Republic.

That name was later changed to Marcha Filipina Nacional when Aguinaldo, who later became President, decreed the song to be the national anthem of the new-born country.

But it was not until August 1899 that Jose Palma, a young Filipino soldier, poet and writer for the revolutionary newspaper La Independencia, wrote a poem in Spanish that became the future words of Lupang Hinirang, translated into Filipino.

Palma adapted his poem Filipinas into lyrics for the Marcha Nacional Filipina, which in Spanish goes:

Su fuego ardiente / thy burning of the heart,

En tí latiendo está / is beating in you. 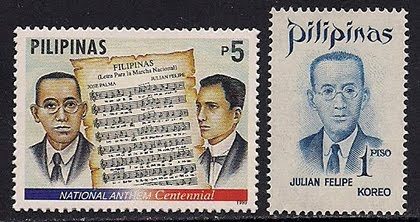 After the Philippine-American War, the national anthem was banned under American rule from being played in public until 1919, when the Flag Law was repealed and it was finally translated into English, although the official Commonwealth version, The Philippine Hymn, did not come out until 1940, barely 6 years before independence.

The Japanse occupation saw the first Filipino translations, and in the 1950s, during the term of President Ramon Magsaysay, the lyrics were revised and Lupang Hinirang, written by Felipe Padilla de Leon, was sung for the first time in public on May 26, 1956.

It is this version that has national symbol status under Republic Act 8491, but the original Spanish and later English lyrics are not recognized, and by law the national anthem must be sung in Filipino.

According to historian Ambeth Ocampo, some of the original meaning of Palma’s poem “Filipinas” has been lost in translation.

The Marcha Filipina Nacional in its 2nd verse refers to the Philippines as Hija del sol de Orienteor “Daughter of the Orient sun” and Perlas ng Silanganan or “Pearl of the Orient” in Lupang Hinirang.

Ocampo says in his book Mabini’s Ghost (1994): “I shudder at the thought of comparing the whole Spanish poem with the numerous translations available. It is not only the music that is far removed from the original, but something has already been lost in the translation itself of the lyrics.” – Rappler.com