Food prostitutes, death by hunger, and a feeding program Facebook Twitter Copy URL
Copied
Sex-for-food prostitution remains prevalent. And it’s not the only aberration brought by hunger. It also brings death to the doorstep.

“Before, clients from Calauan came here with a motorcycle. Then they pick up somebody with just one kilo of rice and a can of sardines. But now, they’d do it even with just a packet of noodles,” narrated Fr Salvador Pablo, head of the Salesian community in Bayan ni Juan, a relocation site in Calauan, Laguna.

Prostitution may be an open-secret here, but reports remain largely undocumented.

Community organizer Susan Pullarca said, “We get our reports from the children who come to us. You really have to integrate into the community to see it (prostitution) for yourself.” “Prostitution usually starts at 11 years old here. We even know some of the mothers who do it,” added Fr Pablo, who refused to divulge identities as he is bound by his confessional vows.

Sex-for-food prostitution remains prevalent. And it’s not the only aberration brought by hunger. It has also brought death to the doorstep. Babies are dying.

“Recently, I blessed a 6-month-old baby who died because of the lack of proper nutrition,” said Fr Pablo. “Almost every week, I bless dead babies.” Fr Pablo pointed to a boy of 16. His size may be considered diminutive for his age. The teenager, who is supposed to be a man in a few years’ time, looks like a pre-teen with his height.

Then there are other children who suffer from retardation. Fr Pablo said he knows of an 8-year-old boy, who still baby talks.

Meanwhile, in the outdoor kitchen, where Sister Marlene Rodillas and her staff are preparing the food for the daily feeding program, a young girl on her way to school says good-bye. Before she goes, she tells Sister Marlene she has no pencil. But she cannot pronounce “pencil” properly.

Sister Marlene now heads the feeding program at Bayan ni Juan, a program that was started by Fr Pablo about 3 years ago. She is talking to a carpenter about the roof (or the absence of it) in their mess hall, which was damaged by Typhoon Glenda.

“We had to transfer the day care because our roof was blown off,” narrated Sister Marlene. 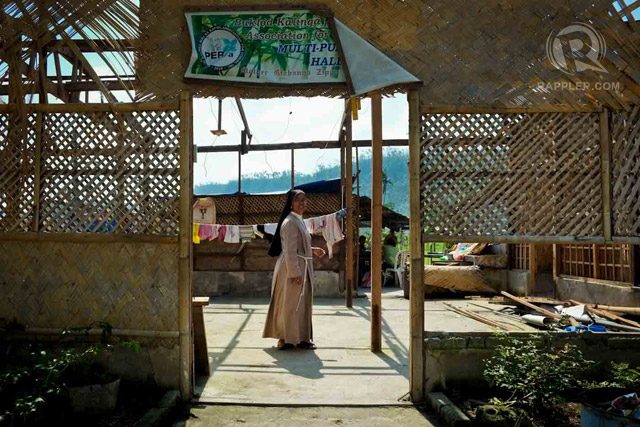 Meanwhile, 52-year-old Lolit Razon is busy at the kitchen. She is one of 5 remaining volunteers of the feeding program. They receive only an allowance for their work, but it’s a labor of love.

“We all benefit from the feeding program, including my family,” said Nanay Lolit, who was relocated from Tondo to Site 1 of Bayan ni Juan in 2008.

Every day, they prepare two cavans of rice, 120 kilos of vegetables, and 5 kilos of meat (chicken or pork), surprisingly enough to feed around 2,000 beneficiaries. They work around this ratio of ingredients for their monthly menus.

“Sometimes the children come to me, asking, ‘Aren’t we eating yet?’ You will pity them because you see how much they really need it,” Nanay Lolit said.

Among those lining up for the feeding in Makativille is mother of 4 Joeam Baldonado, her youngest child in tow, plastic containers in her hands. “Only 3 of us in the family are qualified for the feeding program. But there are 6 of us,” she confessed. Joeam said they divide whatever they get among themselves.

About 23% of the population in Bayan ni Juan, particularly children and senior citizens, are reportedly without a meal for the next day.

“Yes, there’s still hunger, a lot of it. We can feed only about 2,000. But there are 20,000 children here,” confessed Fr Pablo. “The operation is small, but we have to give misery and hunger a good fight.”

Although they try to be self-sufficient with their 6 aquaphonic fishpens and their malunggay plantation, the demand for food is too huge for their own supply. The feeding program still relies on the good graces of sponsors. “We just need to create a ripple and that ripple will create a wave, and that wave will become a tsunami of goodness. Goodness replicates itself because God is good,” said Fr Pablo. “We will be able to feed more.”

According to Fr Pablo, after 5 years, they can feel that the people are now recuperating and getting healthier. They are even now trying to earn and make a living.

Fr Pablo added, “One should believe that in Pandora’s box where everything is gone because of some catastrophe or a series of calamities, there is only one thing left in that box, and that is hope. This is something that should never be taken away from these people.”

The Salesian priest hopes to achieve that by also feeding their souls. How can we help fight hunger? Report what your LGU is doing, recommend NGOs, or suggest creative solutions. Send your stories and ideas to move.ph@rappler.com. Be part of the #HungerProject.

If you have any information on this incident, you may also e-mail us. The #HungerProject alerted the Department of Social Welfare and Development (DSWD) regarding this issue.