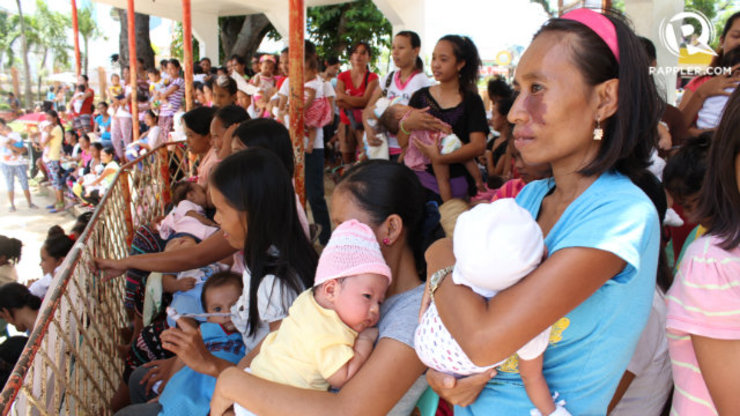 MANILA, Philippines – Breastfeeding continues to be one of those topics that Filipinos tend to shy away from and not take seriously, Senator Pia Cayetano said on Monday, August 11.

Despite its importance and connection to several issues, she said the battle to raise breastfeeding awareness has been difficult.

The decision to breastfeed an infant can also affect his or her disposition in the future. (READ: Breastfeeding: Mission possible)

“It is an established fact that one of the obstacles to learning is malnutrition,” the senator explained.

The United Nation’s Millennium Development Goals (MDGs) are highly connected to the importance of breastmilk, most especially those related to maternity and child health. (READ: Breastmilk, indigenous food: A mother’s recipe for healthy children)

Cayetano also stressed that breastfeeding is the most cost-effective means to provide high quality nutrition to children and babies. It is also associated with a decrease in maternal post-partum blood loss, a decrease in breast cancer, ovarian cancer, endometrial cancer and osteoporosis.

United Nations Children’s Fund (Unicef) country representative Lotta Sylwander emphasized the irreversible effects of malnutrition on children. By exclusively breastfeeding a child, this can be stopped.

“Everything that a child didn’t acquire in his first few years couldn’t be acquired in the future,” she said.

According to a 2008 report from Lancet, a renowned medical journal, breastfed children have at least 6 times greater chance of survival during their early months than non-breastfed children.

The World Health Organization and Unicef have recommended that infants be breastfed within the first hour after birth and be breastfed exclusively for the first 6 months.

“During emergency situations and calamities, breast milk is also a mother’s best advantage and a baby’s best defense,” she said.

The Department of Health and several organizations have been campaigning against formula milk, especially during disasters. Donations of this kind are no longer allowed to be given away.

Aside from being unhealthy, the lack of clean water could also lead to diseases that can put the lives of children at risk.

“When babies are given unsafe or contaminated water for formula milk, they can acquire diarrhea or other water-borne diseases that might eventually lead to death,” Cayetano explained. In contrast, “breastfeeding is always safe and sanitary for the baby.”

Studies reveal that one of the largest barriers to continuing breastfeeding is a mother’s need to return to work. (READ: Who’s violating the Milk Code?)

Republic Act 10028 or the Expanded Breast Feeding Promotion Act looks to create an environment that protects the emotional, physical, and psychological needs of mothers through breastfeeding. It requires that the work place and public facilities frequented by women must provide lactation rooms. (READ: Pinoy moms celebrate Breastfeeding Awareness Month)

Cayetano said there is a need to promote a breastfeeding culture and make sure that health professionals continue to do the same. “In the end, who can argue that our wealth is our children? But to leave their future to chance would be negligent on our part,” she said. – Rappler.com

Alisa delos Reyes is a Rappler intern. She is an incoming graduate student at the University of Chicago, School of Social Service Administration.