Responding and learning: A foreigner’s lesson after Haiyan 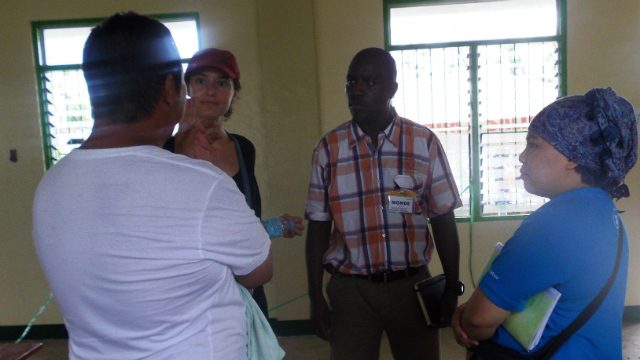 Facebook Twitter Copy URL
Copied
'I was a humanitarian worker sent to help the Philippines, but I learned so much from the people there'

TACLOBAN, Leyte – Monde Nasilele had his holidays planned long before the Christmas season in 2013 but his plans were quickly canceled when he got a call from his boss, Budi Yahya Anurantha of World Vision’s Food Programming Management Group (FPMG).

Budi requested the 39-year-old to leave for the Philippines on December 15, 2013. Monde said he needed some time to go to Lusaka, Zambia where his family was and explain to them – especially to his two children – why he would be absent for Christmas. The humanitarian worker had not been home for a long time.

“It was not easy to do. I have been away and now I need to cancel our holiday and forego my time with them,” he confided. Eventually, his family understood him and supported the decision. On the 17th of December, he flew to the Philippines and joined the Haiyan Emergency Response Team as Food Specialist signing up for a five-week deployment.

“This is my second time to be deployed in Asia Pacific and I learned a lot working with different cultures,” Monde added. “Being in a disaster response makes you appreciate things that you often take for granted.”

He said that the disaster wrought havoc and destruction over a relentless 5 hour period.

“Imagine a lot of lives were lost and changed in that short duration,” he emphasized. “When I went to Tacloban the first time and saw what Haiyan has done, it compels one to act – to do something. It is not easy but it needs to be done.”

Then he realized how different response work can be between a rapid disaster – such as a typhoon – and a slow onset disaster, such as a drought or famine.

One driver who picked him up at the airport gave him an unforgettable lesson.

“The driver told me how his family lost everything during the storm but he was smiling as he shared how they were moving on. I think it was not because he did not feel the pain – but because he has a lot of hope for the future,” Monde recalled. “It left a big mark on me. We always have challenges in life, but we do not allow them to weigh us down.”

He was also impressed by the hardworking Filipinos working in the field.

“I cannot imagine, in the face of such misery, where our Filipino staff get all the energy,” he added. “They multi-task, wake up early, help each other and can almost do everything. I am amazed.”

He promised to share this lesson when he goes back to his team in East Africa. He firmly recommends for relief staff to get deployed so they get to help other national offices and at the same time learn from the experience.

“My big lesson is, if we are able to respond this well here in Haiyan – I would say it is very good with all the accomplishments at this point – it would challenge slow-onset responses to learn from this and be able to achieve more,” he said.

The Haiyan Response Team was able to achieve more than what they targetted. Nine weeks after Haiyan, World Vision was able to assist 555,815 people. -Rappler.com