Sleeping above tombs and living among the dead

Aug 21, 2014 5:25 PM PHT
Fritzie Rodriguez
Facebook Twitter Copy URL
Copied
None of the residents are afraid of the dead. There are other things to be afraid of, they say, like the lack of means to continue living. MANILA, Philippines – “’Pag may libing, mas may pagkain,” Lita said while sitting atop a grave, which she fondly calls her “alaga.”

Some mourn the dead, others the living. Some fear death, others anticipate it. In the Manila North Cemetery (MNC), around 10,000 lives depend on the dead.

Lita’s family of 6 moved to MNC in 1984 after being evicted from an informal settlement in Quezon City. She inherited their home – a mausoleum – from her mother-in-law who was also a caretaker. It is common practice for some families to allow caretakers to live inside the mausoleums.

Living in MNC is either by birth or by referral.

Lita’s husband grew up in MNC, so did his parents. He built mausoleums and dug graves until his own death in 2001. Meanwhile, Lita works as a caretaker; she cleans tombs and makes sure its grills or decorations are not stolen.

She receives pay – around P600 ($14) per tomb – every November, plus occasional tips during death anniversaries. By the year’s end, Lita earns over P12,000 ($273) – most of it gone by January. Lita, like many of her neighbors, lives on debts while waiting for Undas, the grand payday.

Her income mostly goes to loan sharks. She also sometimes works as a laundress, a parking attendant, and a scavenger. Her other gigs include the “pabasa” during Holy Week and gathering free food during fiestas.

Other residents earn from painting tombstones, selling candles and flowers, running sari-sari stores, or driving tricycles. A few work outside the cemetery’s walls. 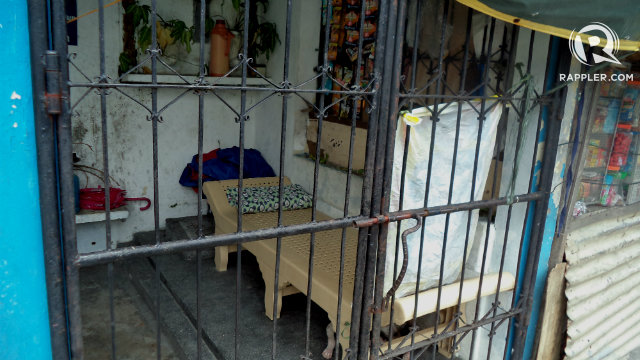 “Now there’s no eviction order from the city hall,” said Alice Sison of the MNC Administration. There are no relocation plans either.

In the past, families were constantly threatened by demolitions. ATD (All Together for Dignity) Fourth World, an international non-governmental organization, reported that past relocation plans never prospered because most residents preferred to stay and work in MNC than in remote and underdeveloped resettlement sites like Antipolo.

Things are more peaceful at present, as long as families maintain MNC’s cleanliness and order. “Those who commit crimes are evicted and banned,” said Willie Lazaro of the MNC Security. He added that newcomers are no longer welcome to build homes, and that gates are closed – even for residents – from 10 pm to 5 am.

Some, however, complained of random police raids. “Kahit inosente, hinuhuli,” (Arrested even when innocent) a mother shared. MNC is sometimes used by criminals – who usually climb over walls – as hideaways or dumpsites for corpses, residents said.

Life is tough, but residents strive to make it work. To continue living in the land of the dead, one must stay creative.

Families usually hop from one grave to another before landing home. Lucia, born and raised in MNC, was evicted 6 times by former clients before finally settling down in their new mausoleum.

Water pumps are maintained across the cemetery; water sells for P2 per container and delivery via kariton is P5. If they have extra money, families buy mineral water outside.

Some have legal electricity connections, others use jumpers, while most live without them – candles are abundant after all.

There are no toilets, except for the ones located by the front gate – far from the residents. Some mausoleums have toilets, but only its caretakers can use them. Where do the others go? “Sa tabi-tabi lang,” most would say. (Just anywhere.)

A truck comes to collect garbage, but pollution remains a problem in some parts of the cemetery. Others take advantage of the situation and recycle trash either for sale or for personal use.

Families buy charcoal or collect wood to cook meals. Others depend on mobile karinderyas. Some afford to eat decent meals; others live on toyo-flavored rice. Tricycle rides to and from markets already cost P60.

Some children appear stunted and underweight. Many are exposed to junk food and unsanitary food preparations.

“Nutrition can be a problem here,” said Vanessa Malfait-Joos of ATD Philippines. She has volunteered in MNC for 4 years.

Some families in MNC benefit from the Modified Conditional Cash Transfer for Homeless Street Families (MCCT-HSF) program of the Department of Social Welfare and Development (DSWD).

While residents are thankful, some complained of miscommunication and delayed or ungiven grants.

MCCT-HSF provides skills training and cash grants to be used for health, education, and housing. Beneficiaries are expected to move out of MNC since the cash grant will cover rent for the first 6 months.

Marcel Mendoza of DSWD-NCR clarified that MCCT-HSF benefits last for a year. The beneficiaries are then assessed whether they can proceed to the regular CCT program. To qualify, families should have sustained rent for at least 3 months after the 6-month housing subsidy expires.

Most families, however, were unable to continue paying rent. Many returned or never left MNC, thus making them unqualified. ATD wants to uplift the self-esteem of MNC residents, without making them feel hopeless or dependent.

“They already feel guilty for living poorly. The government must respect them too,” Joos argued. She said that informal settlers shouldn’t be treated as mere beneficiaries, but as capable partners in the planning and evaluation of programs – especially when developing relocation projects.

Some children feel discouraged to attend school since teachers call them “bobo.” (stupid) Some can’t enter school because of poverty or poor health. “The government should understand the whole context before they sermon the poor. They must listen too,” Joos said. “Sustainable jobs are needed, not just dole-outs.”

ATD advised the government to recognize “caretaking” as decent jobs. “Systematically organize these jobs. We want them to realize that they’re capable and have options and rights even as informal settlers. Encourage them to organize themselves,” Joos added. “Some are lazy or bad, but not all. There are hard workers too.”

Since they deem life outside too difficult, many residents would rather stay in MNC forever. “Mahal renta sa labas, ‘di pa matibay. Dito sementado, may bubong. May trabaho,” Lita said.

(Rent outside is expensive, houses are feeble. Here it’s cemented, with roofs. There are jobs.)

Some are satisfied sitting all day waiting for a burial that may or may not happen. Joos said that residents should also be encouraged to dream and to explore options outside the cemetery.

“Help them have a change in perspective” but without discrimination. For this to happen, livelihood, education, affordable housing, and other social services should be accessible.

None of the residents were afraid of the dead. There are other things to be afraid of, they said, like the lack of means to continue living. – Rappler.com

ATD Philippines conducts forums, education and literacy activities, and a livelihood project for residents of the Manila North Cemetery. They also assist families who want to process birth certificates or other social services. If you want to know more, support, or volunteer for ATD, you may reach them here.