When a woman has a wife

Sep 11, 2014 8:00 AM PHT
Shakira Sison
Facebook Twitter Copy URL
Copied
If your marriage is as important to you - being a real and concrete proof of your love and commitment - why deprive others the same blessing? Surely you're not the only one entitled to a love that's recognized by law.

Two years ago, I married my partner of ten years in a small wedding in New York City. After our ceremony, we discussed how we would refer to each other going forward.

The luxury of unconventional relationships is that you have the freedom to adopt or reject conventional labels and roles. We were among the first to marry in our group of gay and lesbian couples, so for us terminology became a matter of deliberation.

In the decade we were still a committed couple without the benefit of marriage, we used “partner” to refer to each other because “girlfriend” or “lover” just didn’t seem to fit what we had. After our legal ceremony, we decided that we would begin referring to each other as each other’s wife.

Although “wife” is a traditionally heterosexual term, we felt the need to move past “partner” and into something universally understood. We also felt that the more gender-neutral “spouse” did not sound right. I wanted to come home to a wife (not a spouse) and she wanted to do the same.

Even in the progressive city of New York, a woman having a wife is still met with surprise. In a doctor’s office or at a restaurant, when a female voice says, “my wife,” heads still turn and people subtly glance in our direction. For others who aren’t exposed to different kinds of people, it’s even more difficult to comprehend.

Once, a neighbor asked me who it was I lived with, and when I said, “Oh that’s my wife!” he paused, looked down and said, “Oh your…umm-“

“My wife,” I said again, a little louder, and a little bit prouder. I wanted to be prouder than his shame and awkwardness, even just to show that it’s not something to be weird about. Whenever the opportunity arises, I try to make it a point to identify myself as a gay person so that people will learn that we’re just ordinary folks who exist peacefully around them, and not the perverts and angry freaks we’re made out to be.

Why do I need to do that? I used to be more selective and didn’t mind calling my partner my friend, cousin, or roommate. I still do that if I’m talking to a stranger, don’t have time to explain or deal with negative reactions, or simply fear for myself around strange environments.

But now that my union has been legalized and made legitimate by my state and recognized by the federal government, I feel that it’s my duty to remind others that what I have is the same as what they have. It’s not secret, it’s not shameful, and most of all, it’s not less meaningful. It’s just equal, and should be treated as such. The law demands it – at least on my side of the world. In other places, it forces the question of whether marriages that are legal in one country may be invalidated in another.

Whether people like it or not, and whether their religion recognizes my marriage or not, the state of New York and the US government both recognize and protect my marriage. The state will protect us as each other’s wife the way it will protect any other husband and wife. Public officials, police officers, city workers and hospital personnel are forced to honor my rights. Regardless of everyone’s feelings about homosexuality, I am my wife’s next-of-kin. By law I must be recognized as such for hospital visits, wills, and medical and financial decisions.

Of course, it takes some getting used to. Understandably, people are not accustomed to a woman having a wife. My insurance agent still stutters when he says it, and my physician’s office still has a hard time using the right terms to refer to the woman I married. Even my barber, who sees me every three weeks, hesitates and still asks, “How’s your friend?” whenever I stop by.

Why do I need to state it? 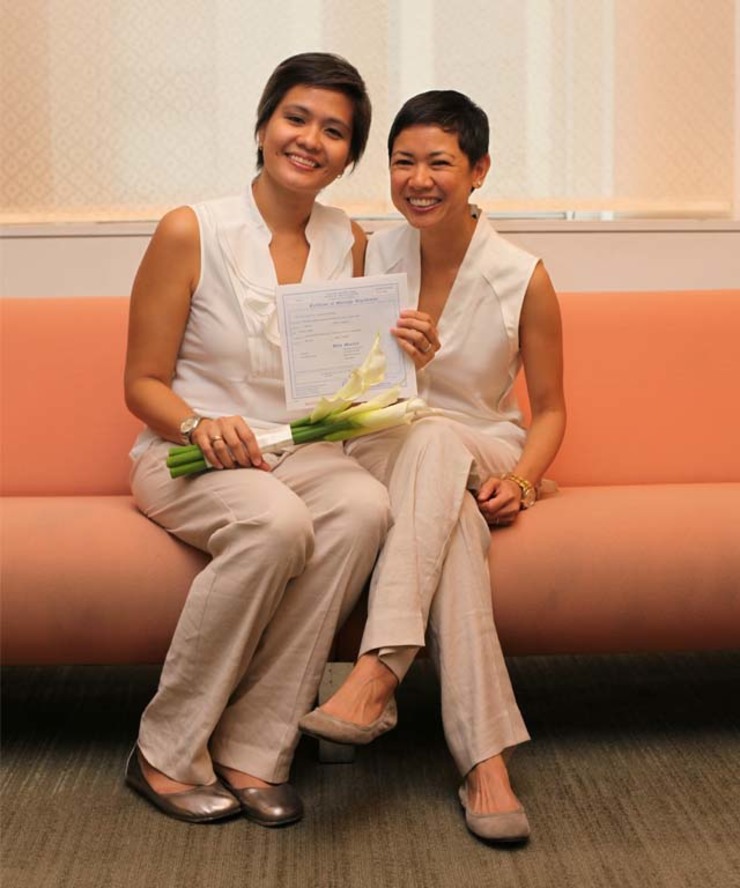 By insisting that my wife be called so does not mean we are shoving our sexuality down people’s throats. It’s no more sexual than you introducing your wife as such. You are simply stating a fact (as I am), and you would be equally annoyed if someone kept referring to your wife or husband as just your friend.

But what does it really mean for a woman to have a wife? Aside from a commitment of love presented to all our friends and families, a marriage between two women is also a statement that this union is complete. It disproves all the warnings we were given since we were young that we would never marry and have a family. It shatters everyone’s promised threat that gay people will always be alone, and that only a man can give lesbians the security and family they need.

We exist with our own lives, homes, finances, challenges – all without a man – and in some countries, the law actually recognizes this union as equal to everyone else’s.

I am a married woman now. It’s only a piece of paper to some but it means more to me than just a commitment of love and friendship. It means that like you, I have a wife who completes my home and with whom I share a life and family. It means that I also have the duty to be a good wife and faithful life companion, as do you. It means that I have someone who can make medical and financial decisions on my behalf. It means that should something happen to either of us, what we have worked for will not suddenly belong to someone else because we are not each other’s next-of-kin.

It’s hard to know what these rights mean unless you’ve been deprived of these benefits within your relationship. It’s difficult to comprehend just what we mean about marriage equality unless you’ve been told that you and your partner of many years cannot have what others can get by simply marrying an opposite-sex stranger off the street. It’s also very easy to say that the LGBT community already has “enough rights” when you haven’t lived with the fraction of rights we are allowed.

My marriage of two years as well as my commitment of twelve years is no different from your marriage. It exists with or without children, homes, or assets. It has happy times, sad times, challenges and responsibilities. We pay the same taxes, follow the same laws, and have day-to-day constraints we all have to worry about. Our marriage may be as weak as our wills or as strong as your commitment. Our promises were both sealed under law when we all faced our chosen life partners and said, “I do.”

No different from you

To me, my marriage is my most important commitment and my number one priority. Getting married has only strengthened my relationship and improved our health and well-being.

If your marriage is as important to you – being a real and concrete proof of your love and commitment – why deprive others the same blessing? Surely you’re not the only one entitled to a love that’s recognized by law. You’re not the only one who deserves the happy ending of a wedding whose meaning is so universal that it concludes majority of movies, fairy tales, and love stories.

Denying gay people that ending keeps them in the shadows. It teaches young gay people that there is no point in loving with all of their heart. How can we blame them then for their reputation of casual relationships, or for becoming victim to opportunistic lovers, when we ourselves tell them that there will be no happy ending, no legal protection, and no sense of permanence in their lives?

I find it hard to believe that people will stand in the way of someone else’s commitment of love, yet not flinch at extramarital affairs, polygamy, or reality show marriages.

Who is truly desecrating the sanctity of marriage then? Those who want to cement a lifelong partnership, or those who play with it like it’s an irrelevant and disposable act? – Rappler.com

Shakira Andrea Sison is a two-time Palanca-winning essayist. She currently works in finance and recently celebrated a dozen years of commitment with her wife. She is a veterinarian by education and was managing a retail corporation in Manila before relocating to New York in 2002. Her column appears on Thursdays. Follow her on Twitter: @shakirasison and on Facebook.com/sisonshakira