Sep 24, 2014 1:45 PM PHT
Joey Ramirez
Facebook Twitter Copy URL
Copied
Why do we get so riled up when someone from another country makes mention of the ills we have, when we make no bones about how unhappy we are with the same? I’m not sure which ad agency it was that produced this “not for public consumption yet” advertisement that – there’s no two ways about it – clearly targeted the Philippines as a less than desirable place to invest one’s business in, raising 4 key points: unfriendly climate, safety concerns, less government support, and poor infrastructure.

Someone put it this way in an online comment (I’m paraphrasing): it would be akin to Philippine Airlines making an ad that, given recent events, would portray Malaysia Airlines as your gateway to the afterlife, or the one airline not needing a return flight ticket.

Even though this is a “war” between businesses, it hit a nerve that some Filipinos would probably say reeks of personalan – but I have to say, every issue that paints an unflattering picture of the country is always deemed below-the-belt, anyway: basketball, beauty contests, treatment of our Overseas Foreign Workers (OFW), say anything not-positive, and be prepared to be accused of the ‘R’ word – racist. (Even when none was intended or implied. It’s immaterial to some citizens.)

However, bad a taste the ad left in one’s mouth, I cannot help but ask: why do we get so riled up when someone from another country makes mention of the ills we have, when we make no bones about how unhappy we are with the same points, and we criticize our own government for those exact same things, every frigging hour? 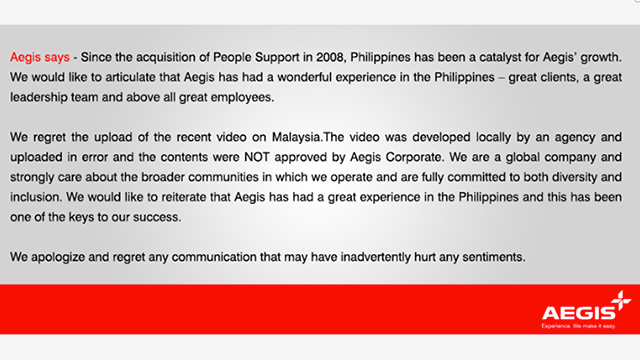 Take the ad’s point about (our) poor infrastructure, and juxtapose this with countless (local) videos and news reports about the horrendous lines for our trains. We roundly hurl invective after insult against the Department of Transportation and Communications (DOTC), for our never ending pasakit (suffering) just to get in the station – which could take hours – all because many train cars have broken down, are poorly maintained, and if you’re horribly unfortunate, you could get a ride off-track. I’m sure DOTC Secretary Jun Abaya feels our collective loathing, but when a Malaysian company says this, suddenly it’s supposed to be all-out war?

Just a week ago, we all expressed disgust and fear when a roadside “incident” revealed that cops were trying to extort money from supposed drug dealers, making us unsure if we could even approach our law enforcement agents. But all hell breaks lose when Aegis Malaysia (or at least the company doing their ads) says just about the same thing? (And in a more general sense, even.)

Our independent film makers always lament how the government does not give any support, to the point that they have to showcase their films in other countries (some even reaping awards). How is this different from an ad – although done in another country – that essentially repeats this?

(I won’t even touch the weather angle, for the obvious absurd reason.)

So let me see if I got this right: we can complain about how our government and public services suck rain boots, but as long as it’s just us. Outside/foreign observers should never dare say the same things, things we gnash our teeth over. – Rappler.com

Joey regularly writes his blog, The Guy with a Blog, where this piece first appeared.

Other articles by Joey Ramirez:

Someone to roll my eyes with

Why do maids have to wear uniforms?