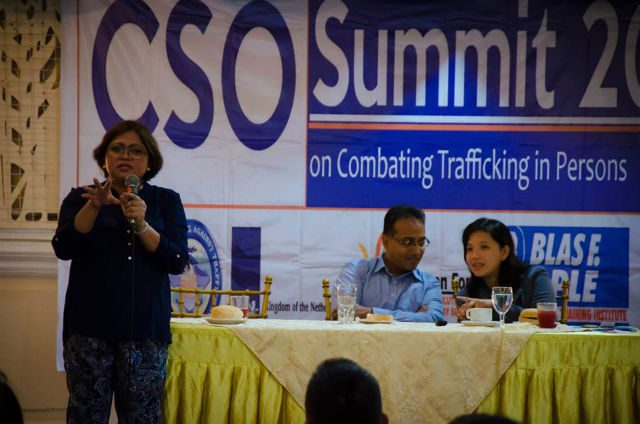 ILOILO CITY, Philippines – Growing up in a fishing village in Bohol where she considered her family the poorest, the creator of a potentially lifesaving application for Overseas Filipino Workers (OFWS) never thought she would ever be an app developer.

Myrna Padilla developed the OFW Watch app to help distressed  migrant Filipino workers. According to the application’s description, “OFW Watch will alert you, in complete privacy, if an OFW near you is in trouble.”

The description adds, “We will recommend a course of action for you to take, such as contact the local authorities. You will decide in complete privacy and anonymously if you can act. The course of action will NEVER involve financial assistance.”

Padilla says the app “connects you to other Filipinos in the area who share the same language, hometown and even profession.”

OFWs may also report suspected abuse cases and missing persons through the application.

Having grown up poor, Padilla said she never expected to become an app developer.

“I knew then that human traffickers target those who have practically nothing; those who are in dire need. I was one of those,” she shared.

While she chose not divulge details of her darker experiences abroad, Myrna said this made her more determined to be of help to her fellow Filipinos.

As an OFW, Padilla moved numerous times – from Singapore to Taiwan and finally, to Hong Kong, where she stayed for 20 years and worked as a domestic helper. During that time, she always had a “passion to serve the community” and would get involved in community service even during her day off.

The course of her future was altered when she learned how to use a computer. With constant practice and with the incessant desire to learn, she eventually created a website and ultimately, developed an application.

“I applied the knowledge that I gained from the Internet for my advocacy. We developed OFW Watch,” she said.

More than an application, OFW Watch aims to uphold volunteerism and unity among OFWs, while enabling an easier way to call for help.

“All they have to do is download the application and register. Once a person becomes a member of OFW Watch, they will automatically be included in the database,” said Padilla.

The app can detect a person’s location, as well as registered OFWs near him. When a problem or an irregularity is noticed, adjacent OFWs may be moved to take action.

The OFWs’ other online accounts – such as Facebook – may also be synched with OFW Watch, so once a person stops communicating, other OFWs will notice.

According to Padilla, she discovered her hidden passion for computers through her 8-year-old ward in Hong Kong, Jonathan.

“My boss instructed me to follow Jonathan at all times. She told me, ‘Whenever he would open his computer, just watch. Don’t do anything,’” she shared.

At first, the idea of the job terrified a non-technology savvy Padilla.

But as soon as she watched the 8-year-old use the computer, she was hooked. “I was very amazed. Every time the little black thing was moved, there were changes in the screen,” she shared with a laugh.

“I first learned how to use a mouse, then word applications, then surfing the Net, then e-mailing.”

As of now, OFW Watch has more than 100,000 members, Padilla said. This was accomplished without advertising.

The app may be downloaded for free on iOs from the appstore or Google Play. – Rappler.com