Farmers march from Davao to Manila for Coconut Fund 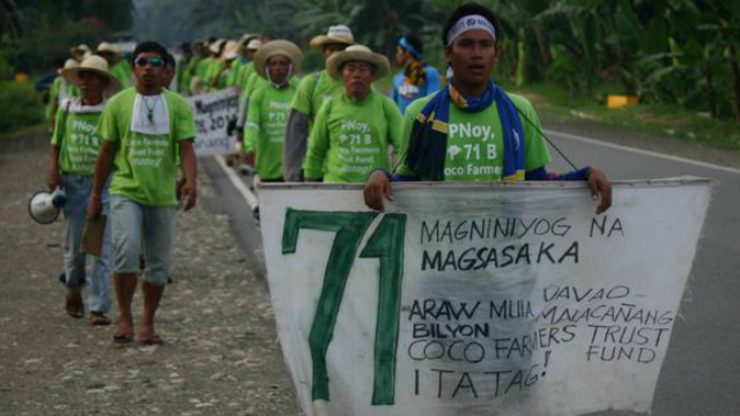 MANILA, Philippines – Coconut farmers are literally going to great lengths for something they’ve long been waiting for.

Last September 21, the 42nd anniversary of the declaration of Martial Law, 71 coconut farmers started their journey on foot from Davao to Malacañang to call for the immediate release of the controversial fund.

Farmers from various coconut-producing provinces will walk a total length of 1,750-km hoping that President Benigno Aquino III will hear their plea and issue an executive order and certify as urgent the passage of the P71-billion ($379 million)* Coconut Farmers Trust Fund.

Through the indirect initiative bill filed by Kilus Magniniyog in the 16th Congress of the House of Representatives and Senate last May 2014, they aim to push for the “utilization of the recovered coconut levies for the ultimate benefit of genuine coconut farmers, especially the millions of poor and marginalized.”

As of October 15, the #KM71 marchers have reached General MacArthur, Eastern Samar.

Oct 15/Day 25: #KM71 marchers are now in General MacArthur, Eastern #Samar (28km from Giporlos). Thanks to the Our Lady of Remedies Parish

According to Aliza Belarmino, there 46 days left until the farmers reach Malacañang from the Visayas region.

The coconut industry make up 25% of the agricultural sector and coconuts are the leading agricultural export in the Philippines.

According to the Philippine Coconut Authority, 3.1 million hectares of farming land are devoted to the coconut industry with over 3.5 million farmers.

In 1971, then President Ferdinand Marcos established the Coconut Investment Act by virtue of Republic Act 6260 which aims to “accelerate the development of the coconut industry through the provision of adequate medium and long-term financing for capital investment.”

In 1973, the late president enacted Presidential Decree 276 which imposed a levy of P15 per 100 kilograms sale of copra resecada. The collected money was directed to the Coconut Consumers Stabilization Fund (CCSF). (READ: The San Miguel-coco levy saga)

Since then, numerous laws have been enacted to ensure the development of the industry. But it has been plagued by controversies as allegations of corruption surfaced. – Rappler.com