Oct 17, 2014 1:28 PM PHT
George P. Moya
Facebook Twitter Copy URL
Copied
The new street-homeless are everywhere – in the streets, on sidewalks, along the seawall of Manila Bay, and outside idle lands, abandoned buildings – as ubiquitous as their dirty laundry, left to hang dry, in full view of the public eye

MANILA, Philippines—The skyline of Metro Manila is rising. The construction of high-rise residential condominiums is in full swing. Real estate is again booming.

But homelessness is ironically increasing, too. Metro Manila holds the dubious record of having the largest homeless population than any other city in the world. Over 3 million, or one-fourth of the total urban population in Metro Manila, are living in informal settlements.

While the price tag on a basic and bare 30-square-meter condo unit is around P2 million ($44,600*), many of those who have been relocated to out-of-city resettlement areas cannot even pay for the P350 (US$7.80) monthly amortization of their 25-square-meter housing units. 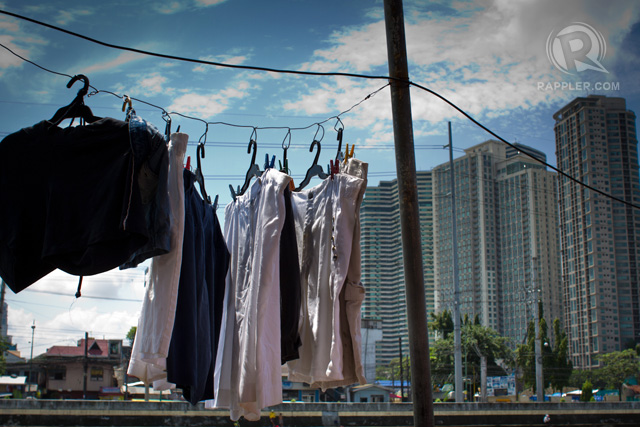 In a relocation site in Calauan, Laguna, some 500 housing units are unoccupied or have been abandoned by the relocatees. Residents say many of those who left can’t find work in their new community. They don’t even have enough money to buy food for a single meal for the family each day; much more, for the monthly amortization.

Judith Javar was born and raised in the slums of Manila. The 35-year-old mother of 4 was relocated with her family to Bocaue, Bulacan, last year. But without any means of livelihood in the resettlement area, they eventually returned to Manila, back to a life of homelessness.

The Philippines may be one of the fastest growing economies in Asia, with the boom in the property sector, helping boost the nation’s economy.

But the country’s economic growth seems to be inherently hollow, as gains from the 7.2 gross domestic product has yet to trickle down to the greater impoverished masses. Some experts say the Philippine economy is not built on solid ground. 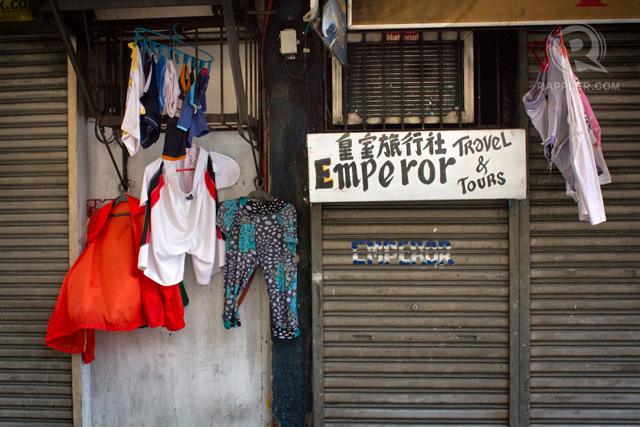 While the construction of residential condominiums is on the rise, along with the development of even more gated subdivisions, urban poor activists decry that demolitions of slum communities are also alarmingly increasing. They feel they are not part of the progress being trumpeted by the government.

The government has offered informal settlers relocation to far-flung areas outside Metro Manila. But some chose to stay in the city and become part of the statistics of the ever-growing number of street-homeless.

Orlando Jose, who is in his fifties, has been homeless all his life. From the slums to the streets, the Joses moved from one state of homelessness to another.

The shack his family was renting in a slum area under Quezon Bridge in Quiapo, Manila, was demolished, following the government’s effort to revive the Pasig River.

“We were not offered any relocation. The ‘owners’ of the shanties were the only beneficiaries of the housing program,” Mang Olan claimed. 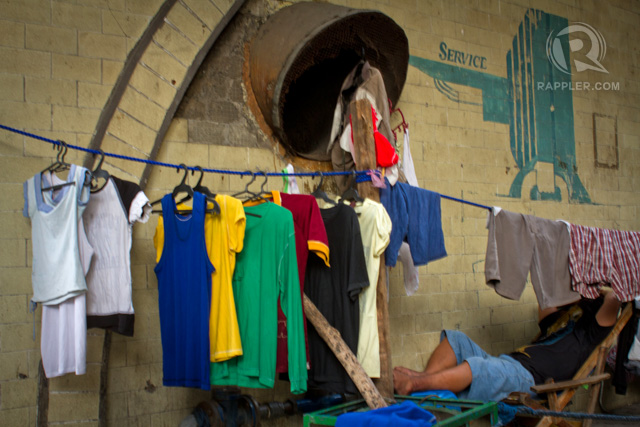 Since then, they have been sleeping from one sidewalk to another, not far from where they used to squat.

The Joses in Quiapo may reflect the travails of other homeless families in Metro Manila. Displaced by demolitions, they were forced to abandon their shanties and sleep without a roof on their heads.

Mary Jane Paco, 27, lived on the sidewalk outside the Santo Niño de Tondo Parish Church with her husband and one-year-old child, before they moved to their “rent-free” shanty at Manila’s congested port area.

When the shanties were demolished in Road 10, the Pacos moved back to their old refuge outside the Tondo church.

The new street-homeless are everywhere – in the streets, on sidewalks, along the seawall of Manila Bay, and outside idle lands, abandoned buildings, and closed-down establishments – as ubiquitous as their dirty laundry, left to hang dry, in full view of the public eye.

“The clothes on our back are our only possessions,” Mang Olan said. 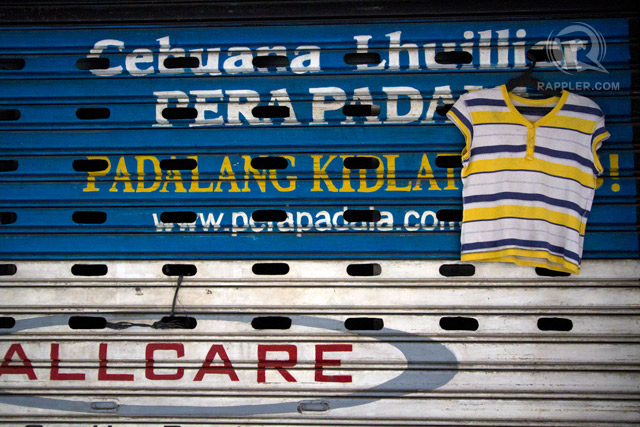 Rowena Jose, Mang Olan’s 40-year-old wife, has just finished hanging their clothes on the chicken-wire fence of an open parking lot. She is carrying their one-year-old daughter, Ronalyn.

The current rate in that Quiapo parking lot is P40  ($0.90) for the first hour, with a P20 ($0.45) surcharge for every succeeding hour. The price of real estate, home rental, and even that of a parking slot, is simply beyond the means of any street-homeless.

“We only make about P200 ($4.50) a day,” said Ruben Zapata, another long-time homeless person in Quiapo. Mang Loben does carpentry work, sells junk, and sometimes earns a little as a watch-your-car boy. Meanwhile, his wife sells cigarettes.

“We know how to survive in Quiapo without resorting to petty crimes. We fight fair,” Mang Loben proclaimed.

The minimum wage in Metro Manila is pegged at P466 ($10.50). But according to labor groups, the cost of living in the capital for a family of six is P1,200 ($26.65). With this discrepancy, estimates on those who are living below poverty line range from one-third to one-half of the urban population.

“We are not asking for alms. We don’t beg. We work for the food we eat,” Mang Loben said. 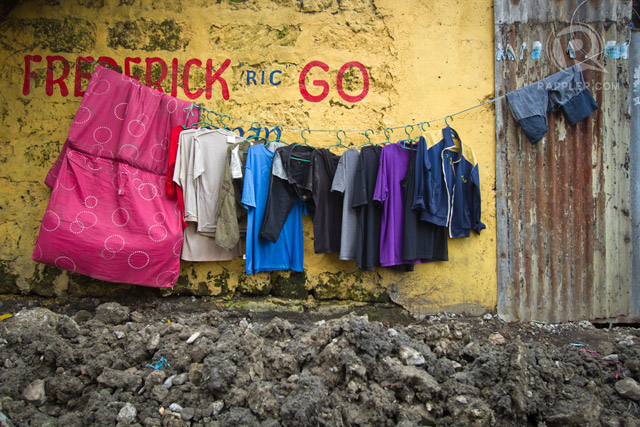 Unlike other homeless people who are mainstays of soup kitchens and remain idle most of the time, Mang Loben and Mang Olan still believe in the value of hard work. The childhood buddies and long-time neighbors are actually living only a couple of blocks away from SM Carriedo, owned by the richest man in the Philippines, Henry Sy.

Incidentally, the self-made billionaire, who had his humble beginnings in Quiapo, also owns SM Development Corporation, one of the major players in the Philippine real estate industry.

“I still remembered Shoe Mart in Avenida, when it wasn’t that big,” recalled Mang Olan. “The building where it now stands was once the Royal Hotel.”

Mang Olan and Mang Loben have seen how Quiapo has changed over the last half-century, how it has grown, and how the population of the homeless has increased alongside it.

“When I see new migrants from the province, I tell them to just go back to where they came from. Life is hard here,” Mang Olan narrated.

Tonight, the Joses, Zapatas, and five other families will again sleep on the sidewalk outside the fences of the parking lot, under the stars, roofed by the dark sky. 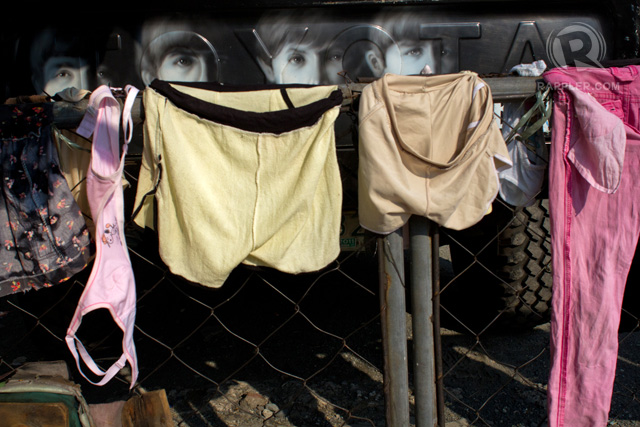