On World Food Day, a banquet or an empty bowl?

Oct 17, 2014 7:09 PM PHT
Dante Dalabajan
Facebook Twitter Copy URL
Copied
'If all of us link our hands together, genuine and lasting change is possible despite the uncertainties. But the key is making the right move now.' 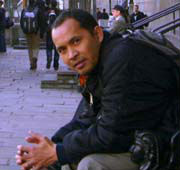 Despite our vaunted growth in national income, 3 out of 10 Filipinos experience hunger. This is based on the result of a Social Weather Stations survey on poverty and self-rated hunger conducted in the first quarter of 2014.

The Philippines was counted as among those countries in 2008 with “severe localized food insecurity,” which is reflective of the fundamental flaws of our local food system.

Intensive agricultural land use has contributed to the degradation of almost 50% of our total land area, according to the Global Assessment of Land Degradation and Improvement released in 2008.

Logging and land clearing for agriculture had destroyed roughly 70% of our forest cover, and had contributed to the loss of top soil of over 5 million hectares of land. 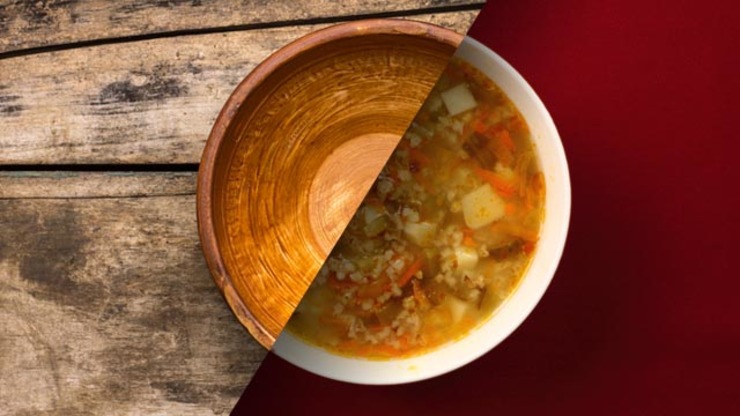 Against the backdrop of low investments in agriculture, land degradation, conversion of agricultural land, the challenge seems to be Herculean. But the wild card is the slow onset impacts of climate and disasters, which combine to eat away our ability to produce food sustainably.

We will have 120 million mouths to feed by 2025. Whether we want to have a banquet or an empty bowl will be a product of the choices that we make now.

The agriculture sector, which includes farming and fishing, has absorbed some of the most severe losses brought about by climate change and disasters.

A study showed that in 2013 alone, roughly about 3 quarters of the estimated damages of disasters were in agriculture, the sector where most poor people are found – with poverty incidence almost twice the national average. Poverty incidence among farmers is at 38.2%, while fishers is at 39.2%, according to the NSCB figures released in July this year.

The cost of recovery and rehabilitation in the aftermath of disasters has invariably gobbled up a huge chunk of public funds, which pushed back hard won development gains. The catastrophic losses produced a knock-on effect on the domestic economy in terms of food price spikes, forgone income opportunities for the poor, and ramped-up public spending for health and social protection costs.

Already, the Philippines ranks second in the world in terms of climate risks as indicated in the 9th Global Climate Risk Index released by Germanwatch in 2013. Already the past 3 decades have been successively warmer than any preceding decade since 1850, and certainly the warmest in 1,400 years. We are locked in to a warming of 1.4°- 2.6°C if carbon emissions proceed at their current phase.

The science is clear: a warmer world will act as steroids to extreme weather events like droughts and typhoons, making them more devastating. The pendulum will conceivably swing to two opposite extremes – with prolonged drought hitting earlier, faster and harder on one end, and cataclysmic storms hitting harder and more often on the other end.

A 2013 report by the National Academy of the Sciences of the United States of America entitled, “Declining crop yields and increasing food prices? Modelling the effects of climate change on agriculture,” revealed that a severe deficit in water availability likely in major agriculture and urban centers by 2025.

Crop yields could decline by as much as 17% unless new production areas are opened and new farm management methods are adopted. The maximum catch potential of our seas could drop to 50% in 2050 from its catch levels in 2000, an already low baseline to begin with.

As the poor grapple with the impacts of climate change, adaptation financing is needed fast and at scale. Rich countries, however, are remiss in their commitments they made in Copenhagen in 2009 to finance mitigation and adaptation actions. 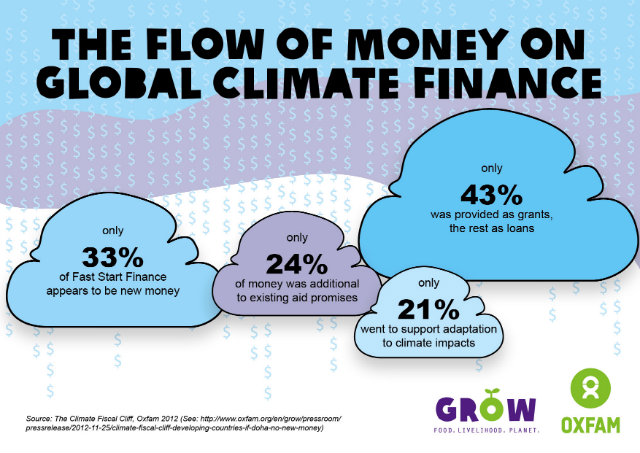 The commitment of the national government to support adaptation through the Peoples Survival Fund, an equity fund amounting to P1 billion, remains mere rhetoric as coffers for adaptation remain empty after over two years.

Thus,what we have is a spectacle of developed countries which created the climate mess being unable to deliver on their pledges, a national government which can’t dig into its own pocket, while the poor and vulnerable, the least responsible but often hit first and worst, are left to fend for themselves.

The solutions are here and now

Through its work in Mindanao, Oxfam has shown that we can meet the humongous challenges before us. Through the farmers’ schools that Oxfam has helped put up in the rural villages, we have shown that, for rice alone, we can reduce the seedling requirement by as much as 20 times, increase the yield by over twice as much, all the while using irrigation water by half as much.

Through integrated farming systems and agroforestry, Oxfam’s project has shown that we can increase income, reduce cost of production, and disperse the risks attendant to agriculture.

In the town of Jabonga, Agusan del Sur, with the support of the local government and the Department of Social Welfare and Development (DSWD), Oxfam has demonstrated how an inexpensive micro-insurance – equivalent to an emergency food kit of 3 kilos of rice, 3 cans of sardines, and 2 packs of instant noodles – could get the family by during the period of crisis.

In the aftermath of tropical storm Agaton early 2014, 430 families received a combined pay out of P2.16 million, which was not that much, but at least something to start with.

Increasingly, a number of Oxfam’s partner local government units have installed automated weather stations that provide up-to-minute, reliable weather updates. The challenge is how to stretch the accuracy of the data to a 6-month period, which could guide the farmers in making crucial decisions on the suitable crops that could be grown, depending on how the climate and the weather would behave.

Together with leading experts, we are wrapping our minds around how the predicted warming will affect water turbidity, salinity and surface water temperature, and how these changes will impinge on the depth, latitudinal distributions, and migration and spawning behaviors of fish and other marine organisms.

This, in turn, will tell us how we are supposed to reconfigure the local economy of people dependent on coastal resources.

We have to build the capacity of local governments, as well as national government agencies, to enable them to respond to emergencies, and quickly build the conditions for recovery and adaptation, in a manner that will thrust the affected communities forward to a path of long-term development.

Despite the complexity of the problem, we are seeing how change can happen. We are seeing that, if all of us link our hands together, genuine and lasting change is possible despite the uncertainties. But the key is making the right move now. – Rappler.com

This piece is part of Oxfam’s GROW campaign for more resilient livelihoods and a radically new approach to the way we grow, share and manage food and other natural resources. www.oxfamblogs.org/philippines/grow

Images 1 and 2 from shutterstock