I am Jennifer Laude

Oct 23, 2014 9:23 AM PHT
Shakira Sison
Facebook Twitter Copy URL
Copied
'What happened to Jennifer Laude could've have happened to anyone. Who are we to cast judgement on her?'

I am Jennifer Laude. I’ve been that girl in the wrong place at the wrong time. I’ve been in dark alleys, rented rooms, and in the company of strange men. But I was lucky (like you’ve been lucky) that the person who could have harmed either of us just didn’t harm us at that time.

It could have very well been me who pissed someone off because I didn’t conform to his standards of womanhood. It could have been you whose appearance just didn’t fit into what your murderer had in mind. Or maybe I could have been the kind of person my abuser believed the world could do without. After all, I am far from typical in dress and personality, and last week we learned that to many, that means I deserve to die.

My killer could have believed that the guilt of feeling affection for someone like me should cost me my life. So he took it so swiftly and left my dead body so casually as if he had just stepped on a fly. 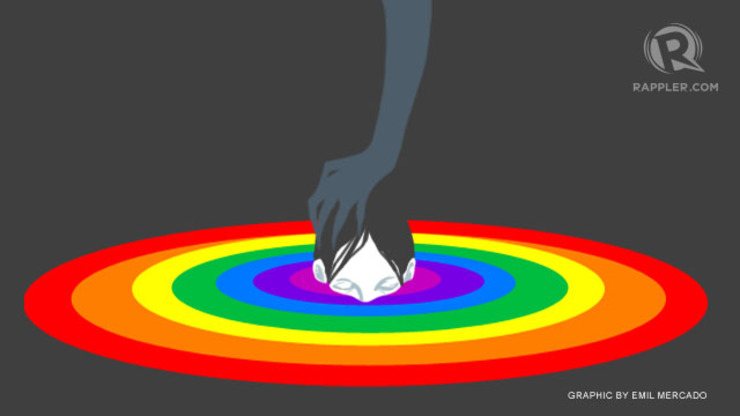 The worst part is that after her death, everyone else treated Jennifer the same way – like a nuisance, an inconvenience, and an eyesore – instead of someone who was once alive, and good, and loved. Regardless of how you feel about her, Jennifer was also someone’s child. She was someone’s partner, sister, and friend. She had some kind of life – one that was snuffed in an instant by an angry man’s hands.

Take one look at the comment sections of news stories and you’ll see that this country’s warmth and kindness we brag about is a joke. It cannot exist when we lack the basic human trait of empathy.

When we say that someone deserves to die (for whatever reason), we play God. We make judgments on something even the gods we worship would not.

Religion aside, when you say out loud that a person deserves violence and physical assault, you dare the fates for the same treatment to be delivered to you or to someone you love. When you lack empathy and speak of it, it only means you cannot place yourself in someone else’s shoes. You ask fate to do the favor of reminding you that what your fellow person has been through may also happen to you.

Take one look at the comment sections of news stories and you’ll see that this country’s warmth and kindness we brag about is a joke. It cannot exist when we lack the basic human trait of empathy.

Jennifer could have been your daughter, or she could have been your son. We’ve all placed ourselves at risk at one point or another. You know that your children go to places you don’t even know. I don’t wish it for you, but always think before you speak because each one of us is only another person’s rage away from violence.

The price of your life

I pray that if it ever happens to you, your family will seek justice even if going against an American serviceman is pretty much a lost cause. I hope that your family will be able to grieve quietly and not be bombarded by media reports that you stole from your murderer, or that the lie you supposedly told was equal in price to your life.

I hope the media reports don’t make you a headline and already assign “valid” reasons why someone could have killed you. I hope they never say it was because you might be a sex worker, because one can’t possibly just be a lady in the company of a white man.

I hope that when it happens to you, people won’t say that you asked for it. I hope people won’t flood comment sections to say your kind deserves to die for trying to “change” what their God has given you. I hope that in your grave you will not be able to see the true colors of your countrymen who are only too glad to rationalize why you died, than to question why white men routinely harm brown women in our own land.

I hope your hometown won’t write an article mentioning that you died with your tongue out as you fought for your last breath – and then say that they warmly welcome US ships and hope this “incident” doesn’t hurt local businesses.

You are Jennifer Laude

I hope that if it ever comes to the point when a powerful man’s grip is on your neck as you are being drowned in a toilet, your last thought won’t be that you died because of who you are. Or how they will desecrate your memory when you are gone.

Your lack of concern, your assignment of blame, and your passing of judgment only ensures that everyone’s life will be at the hands of another. When you say with so much certainty that some kinds of people deserve to die, you make sure that someone out there believes your kind deserves to die, too. – Rappler.com