Nov 11, 2014 1:57 PM PHT
Analiza Perez-amurao
Facebook Twitter Copy URL
Copied
'If the State turns a blind eye to migrant workers, what message are we sending to the rest of the world?' 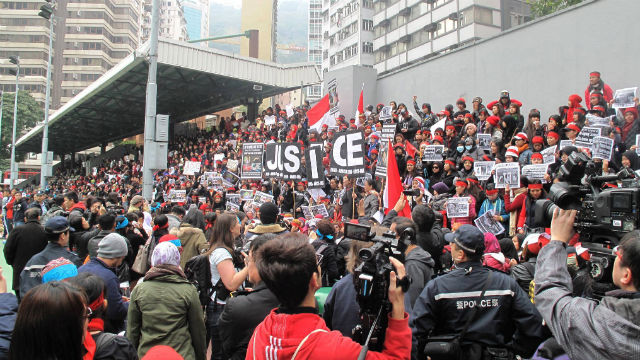 The body of Ms Seneng Mujiasih, aka Jesse Lorena was found naked, with wounds to her neck and buttocks, while Ms Sumarti Ningsih’s body, in a state of advanced decomposition, was discovered stuffed inside a suitcase 6 days after she was murdered.

While the authorities and news reports have so far been focused on probing what pushed Jutting to commit such a heinous crime, insinuating that the Cambridge-educated suspect was a “hard-working and intelligent gentleman… [whose murder charges are] not in his character” and reminding the world that Hong Kong is one of the safest places to stay, the narrative of the two victims and their regrettable fate as migrant workers have been put on the sidelines. 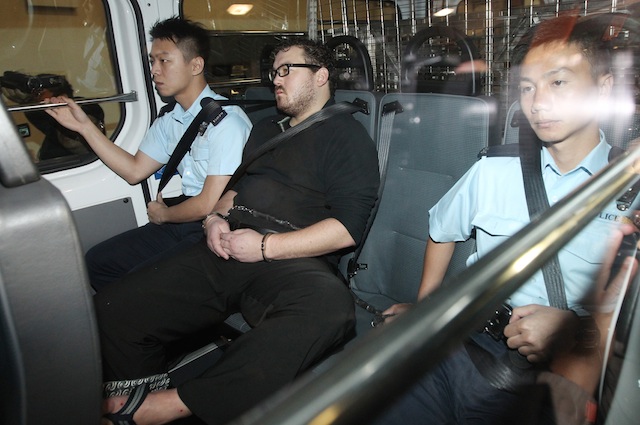 Early media reports were quick to paint a picture of the victims as mere prostitutes. The attitude towards them remains dismissive, with most of the world’s attention fixed instead on the perpetrator. Media space and social networks have been filled with expressions of disbelief over how a single white moneyed male banker ended up murdering two women who lived within the periphery of society. Another report even mentioned Jutting’s parents, saying that they were affluent quiet members of the society who kept a tight circle.

In the face of all these, why should we care?

While the evidence that point to the victims’ underground migrant sex work cannot be denied, such a reality does not diminish the fact that their stories were as real and compelling as Jutting’s circumstances, hence the need to be told as well. Beyond the murder case that now needs to be resolved in a Hong Kong court, the case of Ningsih and Mujiasih uncovers issues way beyond early reports have captured our imagination.

For one, just like tens of thousands of foreign individuals in Hong Kong and in every part of the world – expatriates, professionals or low-skilled workers alike – Ningsih and Mujiasih also had their own dreams and aspirations: to earn a living and put food on the table for their families, no matter how mundane that sounds to many of us.

Ningsih and Mujiasih were migrant workers who hoped that someday their overseas jobs, marginalized as they were in the eyes of everyone, would enable them to send their own children or siblings to school in the hope that their education would someday spare them from having to go through the same difficulties the now-deceased Indonesian workers had to endure.

Studies show that people like them never plan to engage in sex work or any similar act abroad. Oftentimes, other factors such as the host countries’ stringent immigration policies, homeland migrant employment conditions or third-party interventions result in situations that leave them with no choice than to engage in other undocumented work, thereby putting them at great risk.

Secondly, the said case brings to light serious migration concerns that both sending and receiving countries should address. The Philippines, for instance, as one of the world’s biggest labor suppliers, should learn from it. The incident reveals that domestic workers in Hong Kong have to live through what migration scholar Rachel Salazar Parreñas calls “perpetual foreigner” status.

Parreñas’ landmark investigation into the care work Filipinas have to do in the Global North shows that this “perpetual foreigner” status bars them from obtaining citizenship and/or permanent residence regardless of the number of years of service they render in the host country.

Another migration expert, Nicole Constable, adds that despite the significant help migrant workers contribute to the households that employ them, Hong Kong and other host countries that do the same engage in what can be called exclusionary practices. Exclusionary practices require the workers’ physical presence yet deny them their sense of belongingness. In both cases, it is the migrant workers who always end up losing what little wherewithal they have.

With the impending ASEAN Economic Community (AEC) in 2015 that calls for increased labor mobility in the region, a repeat of the Hong Kong incident is, in fact, not far from happening if relevant states do not own up to their duties as the main vanguard of their own citizens’ social security.

With freer flow of people, among other things, it is expected that regional borders will be more porous, creating more chances for adverse conditions to take place.

Given the high propensity of Filipinos for migrant work, the Philippine government, as well as other sending countries, should take this recent incident and the upcoming regional economic integration as the right opportunity for the country to come to grips with the realities of global migration. This means, among other things, protecting its people in the face of societal uncertainties regardless of who needs assistance.

Migrant workers – particularly underground and undocumented migrant workers who are sometimes driven to engage in the sex trade for survival – are no different from all of us, despite any perceived socio-economic differences we each have. Some of them may have taken up jobs that do not fit the framework of what economically abled people deem decent; but, just like you and me, their needs, motivations, dreams, and aspirations are as real and legitimate as yours and mine.

While this is not the first time that migrant workers in Asia have figured in an incident putting them at great risk or, in the case of the two Indonesian women, have resulted in the loss of lives, labor-sending countries like the Philippines should exercise appropriate measures to prevent similar cases from happening again in the future.

In the first place, migrant workers are what Philippine society now hails as modern-day heroes, who with their remittances, help keep their respective families – and the country’s economy – afloat. If the State turns a blind eye on them, what message are we sending to the rest of the world? – Rappler.com

Analiza Perez-Amurao serves as Assistant Program Director in Mahidol University International College in Thailand whose migrant work won her the 2011 Bagong Bayani Award for Most Outstanding Employee and the 2012 OBRA Awards for Outstanding Work Ethics. She has joined the PhD in Multicultural Studies Program of the Research Institute for Languages and Cultures of Asia (RILCA) – Mahidol University where she is specializing in migration studies. Her dissertation examines the gendered migration of Filipino educators in Thailand/ Southeast Asia, looking into how it intersects with AEC 2015. Visit her at www.analizaperez-amurao.com.