Nov 28, 2014 7:15 PM PHT
Darwin Masacupan
Facebook Twitter Copy URL
Copied
When a disaster takes away a community's main source of livelihood, collaboration is the key to build back better 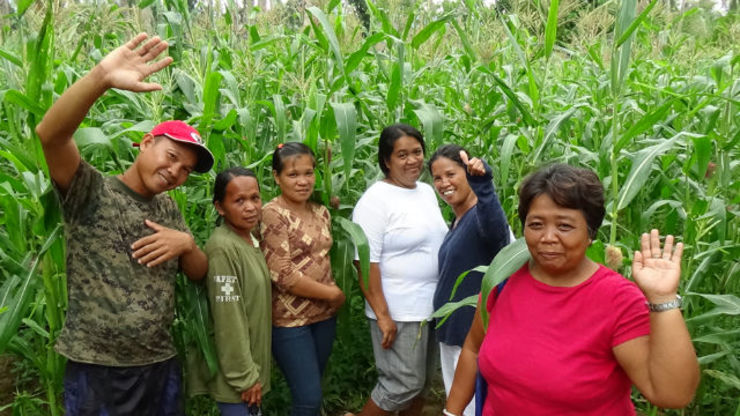 MANILA, Philippines – It was so bright that day, and not just because of the noontime sun directly over our heads. It was another thing entirely: the dreams shared by the people of Barangay Mag-aso in La Paz, Leyte.

Mag-aso is an hour-and-a-half drive from Tacloban City proper. It is accessible through a rough road which becomes slippery and muddy when it rains.

Most of the people depend on agriculture.

“Before, we really did not worry about feeding our families. We had abundant abaca and coconut trees from which we derive our income,” Elvira Andrade, a livelihood group leader in the barangay, shared.

“We even had time to play bingo. Yolanda changed all that,” she added.

Agina Gabreno, the village secretary, recalled what happened when one of the strongest typhoons ever recorded hit their community.

“We thought it was the end of the world. The winds and the rain terrified us, and we cannot see our surroundings,” she said. “Our families and possessions were all drenched. We were cold and hungry.”

With most of the abaca and coconut trees destroyed, the community faced a great challenge. But the people were not about to give up.

Immediately after the storm, they set upon clearing roads so that supplies can get to them. They also redistributed and rationed what little rice and bananas they gathered and received.

ACCORD and CARE, with the support of the European Commission’s Humanitarian Aid and Civil Protection department (ECHO) and the Dutch Cooperating Aid Agencies (SHO), built on this practice of bayanihan (mutual aid) with their shelter assistance.

Neighbors helped each other and prioritized rebuilding the houses of the most vulnerable such as the elderly and those with disabilities. They did not only receive shelter repair kits and cash support but also technical assistance in the form of training on Build Back Safer techniques. Initial training on community-based disaster risk management (CBDRM) also broadened their understanding of how socio-economic and structural conditions render them vulnerable to disasters like Yolanda.

For the livelihood recovery phase, ACCORD and CARE helped the people organize themselves into livelihood groups. The list of income-generating activities they came up with included raising livestock, managing sari-sari stores, and planting crops.

Many of them, for the first time in their lives, picked up their tools and cultivated crops they were not really used to: cassava, gabi (taro), peanuts, and corn.

This diversification of livelihoods and crops is part of ACCORD and CARE’s strategy to strengthen community resilience.

“We were encouraged to plant different crops in our backyards and idle lots so that we can have an additional source of food,” Dolly Odo, treasurer of the livelihood group, said.

By having a wide variety of activities, the community can be self-reliant especially during emergencies. But the community wanted to go big or go home.

“If we only utilized the cash assistance we received in individual activities, we cannot scale up. We want something bigger.” It was then that all 148 of their barangay’s beneficiaries decided to allot P3,500 (around $81*) each from the cash grants they received. It was with this amount that they set upon the construction of a cornmill for the barangay.

Their neighboring barangays ask, “Why corn? And why a cornmill?”

“It only takes 3 months to harvest corn, and we are able to make rice from it. A cornmill here in our barangays would mean that we, along with other barangays in La Paz, would not have to go to another municipality to have our grains processed,” Andrade would answer. 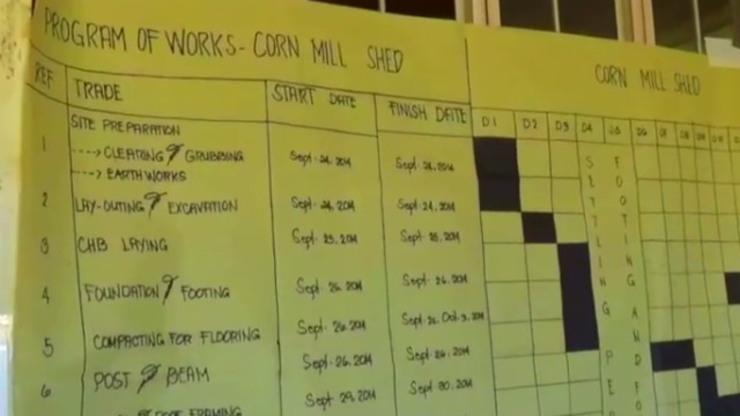 The men had to commit a set amount of time to help build the cornmill as constructing one was not easy. They also had to work the fields for their livelihood in the area.

The women also contributed by cooking the food, clearing the area, and devising budgets to guide project implementation. Andrade proudly shared they have placed their order for the machinery and expect to open the cornmill this November.

Their planned cornmill is different from other businesses, where profits are divided among the members every month.

“The earnings will not go back to us. It will be invested in the bank, and will go into the future purchase of a solar drier, and eventually a rice mill,” she said.

The people of Mag-aso do not have it easy. Life remains hard. Incomes are low. Most of them are tenants, with just a few families owning most of the productive land in the area. This would clearly be a challenge to recovery going forward.

But still, one cannot help but be proud of such strong women who made things happen.

Not content with merely standing behind their men, they have stepped up to the challenge brought by Yolanda.

Now working hard from sunrise to sunset on their crops instead of idly chit-chatting, they still seem to appreciate the change in their community.

“We never dreamed of such things before. Thank you to everyone who believed in us and made us believe that we can scale up our dreams,” a thankful Andrade said. – Rappler.com

Darwin Masacupan is the Project Assistant for Media and Communications at ACCORD. A Political Science graduate from University of the Philippines Diliman, he loves to play Europa Universalis IV and watch UAAP volleyball during his spare time.