Smelly, sticky, wet: Making it work in the dumps of Tondo

Dec 4, 2014 7:58 PM PHT
Fritzie Rodriguez
Facebook Twitter Copy URL
Copied
It's ironic how something only meant to be a temporary housing site can have such lasting effects 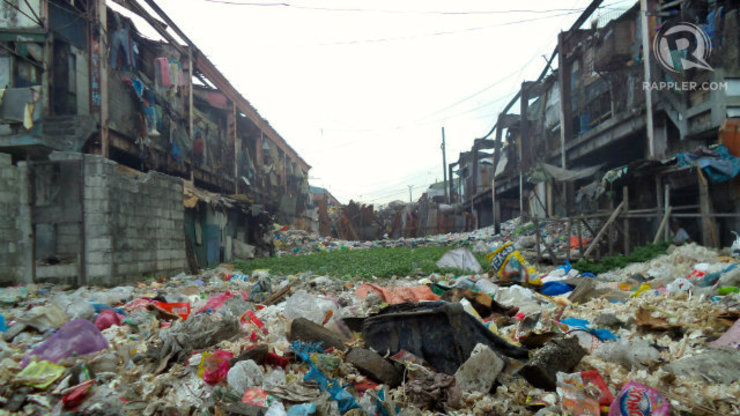 MANILA, Philippines — They said it was only temporary.

But time is tricky; temporary can mean forever. Forever, however, is at the hands of others. Usually those hands belong to the government.

At the heart of Manila is “Aroma,” a temporary housing site in Tondo. To get there, one passes through “Happyland” — its name derives not from happiness, but from the Bisaya word Hapilan which loosely translates to “dump site.”

Filipinos can have a sense of humor.

It rained a few nights ago, but people still walked in mud. Some patches of soil were grassed, some lined with potted plants. The rest held garbage.

The rusty arch read “Brgy 105 Aroma Temp Hsg,” beyond it were women, men, and children gadding about like ants. Some were sitting on their feet, backs glistening with sweat, hands sorting trash.

Aroma’s aroma stays with you. A mix of piss, sweat, smoke, and rot. Air felt thick and warm, and the ground sticky and wet.

Aroma opened when the Smokey Mountain dump site closed. The government shut down Smokey in 1995 and attempted to relocate its dwellers; Aroma being one of those temporary sites. Years later, people still live here.

This is not a secret and yet little has changed in the past two decades, except for its worsening conditions. Aroma was meant to house the homeless until permanent shelters were provided – mostly in Bulacan and Rizal.

Families complain that relocation sites are too far from livelihoods, hospitals, and schools. They find themselves back in Aroma.

This is forever, unless the government pushes them out. But even then, they might return if not to Aroma, then elsewhere.

Aroma originally had 34 two-story buildings housing over 14,000 Filipinos. Eight of them already collapsed, the remaining are mottled with holes, decay, and tales of hope and survival.

Each building has its own reputation; some notorious for drugs, others Today over 2,000 families live in Aroma.

Families live in small rooms made of wood, tarps, and recycled materials. Some have linoleum floors, some have bare soil. The first floor gets flooded, the second gets rained on.

There is no rent, but residents pay for water and electricity like everyone else. Water is P5 per jug, sometimes higher. Some use sub-meters, jumpers, or generators running for limited hours at night.

There are no proper sewage or drainage systems. Toilets are few and communal, and sometimes with a fee. Others piss in poles or pots, and wrap feces in paper or plastic before tossing them like “flying saucers.” Majority earn from scavenging, some sell pagpag (leftover food) which they cook outdoors using coal. Charcoal-making adds income, however, the nearby ulingan was demolished in June.

“Some families were relocated to Bulacan, but sold their units and returned here,” said  Edlyn Abache of Enfance Foundation, a non-governmental organization (NGO) working in Aroma since 2008. “Others chose the P40,000 payout from the government, but still returned here.”

Abache said that residents were asked by the National Housing Authority to choose between relocation or a one-time payout, the latter requires them to leave Aroma.

Enfance advises the government to provide better relocations, “If relocation sites are near livelihoods and social services, then families will stay.” Aside from housing, the government should also focus on creating sustainable jobs, Enfance stressed.

“But they don’t give up, they’re always on survival mode. Many work hard to live,” said Abache. They had just finished their bath, together with neighbors. Their mother handed them shorts and shirts, but no underwear.

Meanwhile, other kids are always or almost naked. The brothers go to school in the afternoon, unlike other kids who are too busy rummaging trash.

Their mother, M, sat on a plastic chair. She cannot move with her swollen body, she is 9 months pregnant. “Dito rin ako natutulog,” she said. (I also sleep here.)

M is expecting her fourth child; her third one died last year. She does not recall the cause of death since she already burnt the child’s death certificate, “Kasabihan ‘yun na dapat sunugin lahat ng may kinalaman sa patay.” (That’s a superstition that you have to burn everything related to death.)

M has tuberculosis, but this is the least of her worries. “Bahala na,” M said about her baby’s impending arrival. M’s husband juggles two jobs at a fish port and a construction site, irregularly earning around P250 per day.

M’s neighbor told her she’s having twins since her navel is heart-shaped, while a fortuneteller told her that everything will be okay.

Although skinny, M’s boys are relatively healthier than their playmates. “Many children are severely malnourished,” observed Abache. “But the main problem is not food or money, it’s neglect.”

Some parents are always out working, leaving children unsupervised and sometimes unfed. “They have parenting problems,” Abached added. “Lacking knowledge on nutrition and health for themselves and their children.”

Respiratory problems, skin diseases, and diarrhea are common, according to the 2013 report of Medical Checks for Children, a Dutch NGO. Some suffer from infected wounds, resulting from walking barefoot.

These childhood health problems can greatly impact them as adults.

Despite all this, parents continue having more kids than they can handle. And in some cases, it is children having children. Aside from poor living conditions, many families also suffer from poor self-esteem.

Aroma has a bad reputation, said  Susan Penaranda, social worker of Enfance. “When applying for jobs and their resumés show their address, Tempo, employers judge them,” she said. “Ah, the place with lots of criminals, that’s what most think.”

She admitted that there are crimes within the compound, but that not everyone is bad. “There are students here, nurses, teachers, but they just lack the opportunities.”

Scavengers earn an honest living, and yet they are frowned upon. “We need to empower the community. We guide them into becoming self-reliant without giving dole-outs,” said Christian Teodoro, Enfance executive director.

Enfance provides counseling and psychosocial support, and links communities with other NGOs and government bodies that provide necessary social services.

Many children were born in Aroma and have never left. Their children, too, might never leave.

It’s ironic how something only meant to be temporary can have such lasting effects. – Rappler.com

For those who want to participate in Enfance‘s immersion program or want to help or volunteer, you may contact them at +632-559-9305 or enfancefoundation@gmail.com.

How else can we fight hunger, its causes and effects? Report what your LGU is doing, recommend NGOs, or suggest creative solutions. Be part of the #HungerProject.