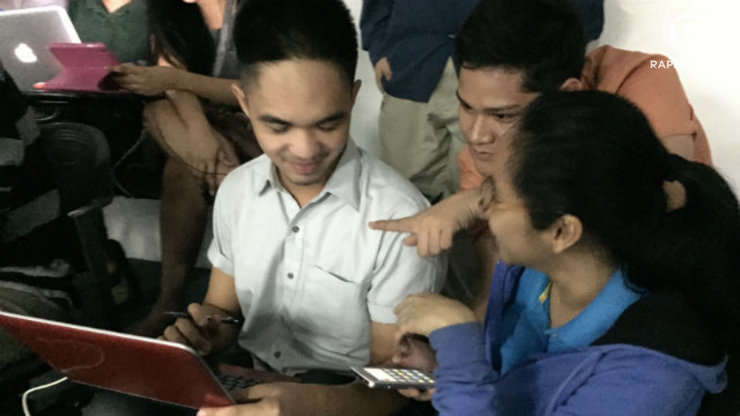 Some 900 kilometers away, in a dimly lit conference room in Camp Aguinaldo, an elite group was busy tracking the typhoon and was ready to alert government responders about calls for help.

They weren’t from PAGASA or the military with the latest weather monitoring technology, but volunteers armed only with their laptops and their passion to serve. They responded to a MovePH call-out for volunteers that went out on Wednesday, December 3, the day Rappler’s Project Agos disaster information management platform was deployed for operation #RubyPH.

Their task was simple but by no means trivial: monitor social media for reports of typhoon damage, flooding, local weather, and calls for rescue. The information scoured from social media sites would be relayed to disaster coordinators at the Ruby Response cluster command center of the National Disaster Risk Reduction and Management Council (NDRRMC) in the next room. From there, action officers would deploy resources to address critical situations and provide feedback, which volunteers would relay back to those requesting for help via social media, all in real time.

In spite of the thousands of active social media users and more than two dozen websites producing information every second, these Project Agos volunteers didn’t flinch a bit. The typhoon had just made landfall and they knew it was going to be a long night. 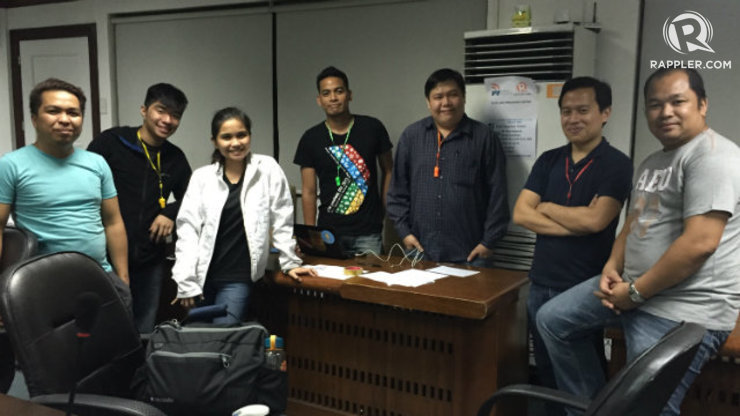 The first 7 volunteers responded to the call-out without a moment’s hesitation.

Jeremy Jansalin, a fisheries researcher, traveled all the way from Los Baños, Laguna together with Jed Cortes, a veteran volunteer of Rappler, to help out. Jeremy had listened to a speech given by Rappler’s Maria Ressa on the power of social media to do good and wanted to see if this could be put into action during Typhoon Ruby.

At the Rappler office in Ortigas, they were joined by other veteran volunteers Mary Joie Cruz, Anthony Esguerra, Gerard Lim, and first time volunteers Lou Gepuela and Cherry Madriaga. Cherry, who went straight to Rappler after arriving from Iloilo, read the call out online and decided to put her skills as a moderator of a crisis volunteer group to good use.

There, the group was able to link up with government officials led by Undersecretary Alexander Pama of the Office of Civil Defense (OCD) and Undersecretary Austere Panadero of the Department of the Interior and Local Government, and other volunteer groups such as the Orange Helmets led by Martin Aguda and Emergency Response Integration Center (ERIC) Director Bong Grajo.

For the next 4 days, these volunteers worked long hours scanning social media sites and providing the government with actionable information. They also bridged people affected by the typhoon with organizations and others who could provide assistance and information.

Thomas Stickney, a volunteer from Lansing, Michigan, didn’t know anything about Project Agos before he volunteered. He knew he just wanted to help.

“When I first started volunteering I really didn’t know what I was doing but slowly got into it as I was given the certain task of keeping an eye on Typhoon Ruby-related hashtags, such as #RescuePH and #MovePH but also looked after the Project Agos interactive map where you can report certain events in relation to what the storm was causing,” said Thomas.

Stickney said the first few hours after landfall were quiet. Soon, however, reports started to come in.

“I saw a report about an evacuation center in Eastern Samar (that) had collapsed. It was said to have been the Oras East Elementary School. So, at that time, I put in a report in our spreadsheet database and also asked for confirmation with colleagues and on Twitter,” said Thomas.

For volunteers Gerard Lim and Christine Catimbang, working in a team was critical to doing their job well. When Facebook user Famela Limpoco appealed for information on the status of her family in Tacloban, the team sprung into action and quickly got the OCD to check on Famela’s home. And although the roof of their home was damaged, the family was safe. 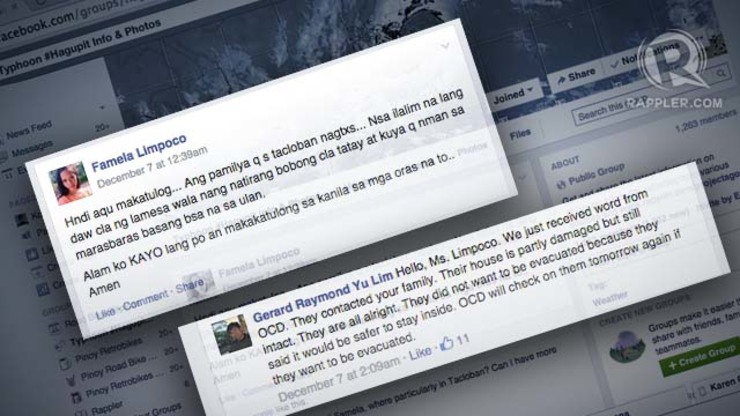 Behind the scenes, other volunteers, including Blogwatch’s Jane Uymatiao and Noemi Lardizabal-Dado, were busy collating information on evacuation and relief centers and updating the Project Agos Alert Map with the assistance of Smart Communications. There were also volunteers from the Standby Task Force who helped classify and map crowdsourced reports.

These were just a few of the cases where volunteers were able to make a difference in an otherwise chaotic situation.

In any disaster situation, information is as critical as food and shelter. Ensuring that timely information reaches those who need it most is what Project Agos volunteers do every time disasters strike. In the process, the volunteers said, they learned a lot more about themselves and about being part of a bigger community.

“These past few days have confirmed the truism that Filipinos inspired by the spirit of bayanihan and united by goodwill can surmount everything and accomplish anything,” said Lou. “Kapag nariyan na ang unos, lumalabas ang pagtutulungan nating lubos,” (Trials bring out our ability to help each other to the best we can.)

Gerard added, “If there’s a chance to help others or do good, then take it. That’s how things should be. It’s what makes us human.” – Rappler.com

Rappler would like to thank all our partners and volunteers who answered the call and mobilized for Operation #RubyPH: