Commuters speak up on MRT/LRT #farehike 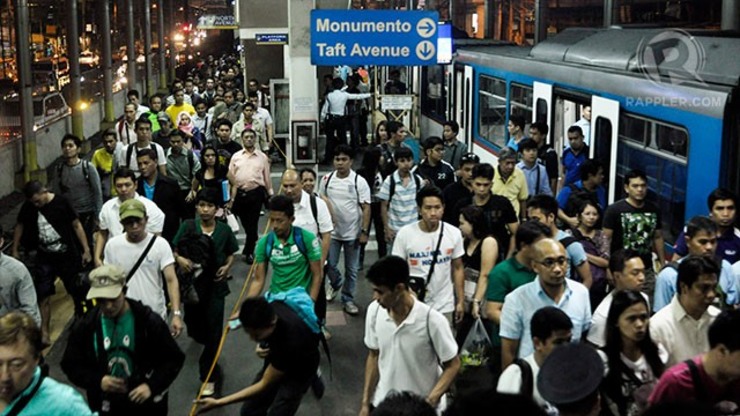 After a long holiday, Filipinos went back to work on Monday, January 5. Despite the fare increase, many Filipinos still rode the MRT and LRT.

The Department of Transportation and Communications (DOTC) implemented the following new fares on Sunday, January 4:

“While 2015 will see increased fares, it will also see marked improvements in our LRT and MRT services,” DOTC Secretary Jun Abaya earlier said in justifying the increases.

The fare hike, however, was met with opposing views.

Some netizens favored the increase but demanded for improvements in rail system’s services.

@MovePH in the long run I think the #farehike is fair. But the increase should have been staggered a long time ago

@MovePH @rapplerdotcom @KRBisaguirre Well if the fair hike is reasonable enough and if people would want a good service then its fine.

@MovePH I’m ok for fare hike if it means improving service, it’s just us citizens are not sure the money’s going where it’s sup to go.

@rapplerdotcom @MovePH if the fare hike reduces the subsidy that the tax payers are paying for – YES TO INCREASING THE MRT FARE!

Jean Fidel, who rides the MRT and LRT to go to work, supports the #farehike: “For maintenance naman siya.” Do you agree with her? Share what you think about the issue using the hashtag #farehike. Discussion ongoing on Twitter.

Meanwhile, others argued the fare hike only adds burden to the commuters.

Jean Fidel, who rides the MRT and LRT to go to work, supports the #farehike: “For maintenance naman siya.” Do you agree with her? Share what you think about the issue using the hashtag #farehike. Discussion ongoing on Twitter.

Some netizens also argued the fare hike will only benefit the private sector.

@MovePH MRT/LRT #FareHike outright unjustifiable because we only have assurance that it goes to the private operators not for maintenance.

Activist youth groups argued the hike will not result in the improvement of services as the revenue will be used to pay the private concessionaire.

Various groups protested on Monday and asked the Supreme Court to block the fare hike.

Train overhauling for MRT3 line is set to be completed in 2016.

Meanwhile, some were offended by the arguments made by fellow netizens, asking commuters to ditch the train if they cannot afford it.

But other netizens argued public transportation should be accessible to all regardless of social class.

Netizens also shared suggestions on how the government can improve the mass transit system.

One problem observed by commuters is how much time is wasted over ticket queues. Netizens suggested having reloadable transit cards sold not only in train stations but also in convenience stores, bookstores, and malls.

This system is being adopted in other countries like Japan, Hong Kong, and Singapore. Some countries also have special promos for tourists going about the city via train.

Netizens urged the government to acquire not only “bigger, faster, and more trains,” but also well-maintained and better-connected train stations. In the Philippines, stations are usually connected through malls or narrow streets, making it hard for commuters to move around.

Commuters also urged the government to look into train safety. In August, an MRT3 train derailed, calling the attention of lawmakers.

@VoltaireTupaz @MovePH effective public transpo is premised on the notion that freedom of movement & one’s safety are basic human rights.

@MovePH Hindi rin PWD and elderly-friendly ang LRT/MRT. Would the current #FareHike even be enough to fix broken elevators and escalators?

Aside from improving facilities and services, netizens asked Filipinos to respect fellow commuters by simply falling in line, letting passengers alight before boarding, and prioritizing the elderly, pregnant, and PWDs.

@dencio30 @kristinamisajon @MovePH then they need to add more train… that’s the only viable solution for now.. plus syempre disiplina din.

While many netizens spoke of the many issues surrounding the country’s public transportation system, others chose to look at the bigger picture.

@MovePH raise the minimum wage, lower prices of goods and services, and people will stop complaining about the #FareHike

@VoltaireTupaz @MovePH but we need to look beyond bits & pieces of the problem. IMHO, our main public transpo framework is problematic.

Aside from the MRT and LRT, netizens also asked the government to tackle other transport issues like the condition of the Philippine National Railways (PNR), regulation of buses and jeepneys, and other alternatives such as the Pasig River Ferry Service and biking.

As commuters, what other ideas do you have in mind that could help improve the country’s public transportation system? Join the ongoing discussion. – Rappler.com

Share your stories and ideas with us, email us at move.ph@rappler.com