Fighting malnutrition in the floodways of Pasig 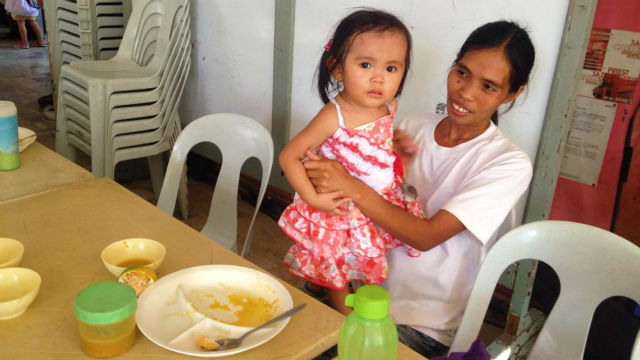 MANILA, Philippines – The children playing around the premises of San Antonio Abad Parish are so different from the quiet and timid ones who occupied the seats inside one room almost 6 months ago.

Susan Tejano recalled how her daughter, two-year-old Patricia Mae, was so thin and small for her age because of malnutrition.

“Naluluha na lang ako kasi sobra ang kapayatan niya (I can only cry because she was so thin),” she told Rappler.

The income of her husband, a tricycle driver, isn’t enough to support the education of their 4 children, more so to provide the type of food needed for better nutrition. Even if he spends the whole day working, it won’t be enough to make both ends meet.

However, the scenario is different now. The little girl now shows no sign of malnutrition – thanks to 6 months of cooperation between the family, the church, and even the barangay.

Patricia Mae is one of the 63 children-beneficiaries of the parish’s feeding program funded by Hapag-Asa, a non-governmental organization focused on helping local initiatives against hunger and malnutrition.

Signs of poverty used to be very evident on the faces of the sons and daughters of families living along the floodways in Pasig City.

Alma Ancermo, head of the social services arm of San Antonio Abad Parish, said that they’re determined to help those in need especially after hearing that one child died before they could even reach out.

“Severe malnutrition na talaga iyong dinanas niya at nakakalungkot na kailangan niya danasin iyon (The child experienced severe malnutrition and it’s heartbreaking that she had to go through that),” she told Rappler.

It wasn’t an easy task to encourage the families to bring their children, aged one to 4 years old, to the church from Monday to Friday. Even if they were provided with food, the parents could not spare money for transportation. 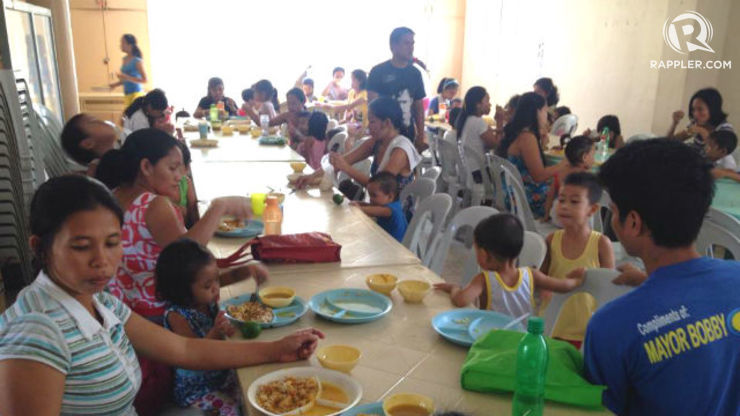 In response, the organizers behind the feeding program enlisted the help of the barangay. Each morning, a service vehicle shuttles the beneficiaries from their area to the venue and vice versa.

(We’d rather spend the fare for household expenses. It’s really a big help that we’re shuttled from our house and back.)

According to Ancermo, the close coordination of different institutions contributed greatly to the success of their program. Regardless of affiliation, they all came together to help those in need.

The day starts for the volunteers at 8 am. With ingredients on hand, they cook the day’s meal depending on the budget. Sometimes it’s meat, sometimes vegetables, but what’s consistent is the food’s nutritional content.

They always find ways to change the menu so that the children won’t get tired of the same meals. After all, Ancermo said, the aim here is to make them healthy.

(We change the kids meals all the time so we can find out what they want. It’s important to discover what they like so the food won’t go to waste.)

There are days when they cook more than what the children can eat. To avoid food wastage, the excess is given to the parents assigned to wash the dishes that day.

(The parents help by washing the dishes. In exchange, if there’s excess food, they can bring it home.)

Even if they only get to bring home a small quantity of food, the mothers and fathers are already very thankful because they have enough food for the rest of the day.

One of the biggest problems of any feeding program organizer in the country is the long-term impact of the scheme. One meal cannot fix the lives of the children if the rest of their meals are laden with unhealthy ingredients.

This is why parents are given lectures by visiting nutritionists and doctors on how to sustain the good health of their children. The attendance was depressing at first – sometimes only a couple of parents would show up – but eventually, the numbers grew when parents learned the importance of the sessions.

(I no longer feel that I can’t doing anything for my children. Even if I’m poor, at least I know how to take of them so that they’ll become healthy.)

San Antonio Abad Parish has become a haven for children who are not well cared for in their homes. Even for a short while – two to 3 hours maximum – they feel safe inside the premises where they can run free and play with other beneficiaries. 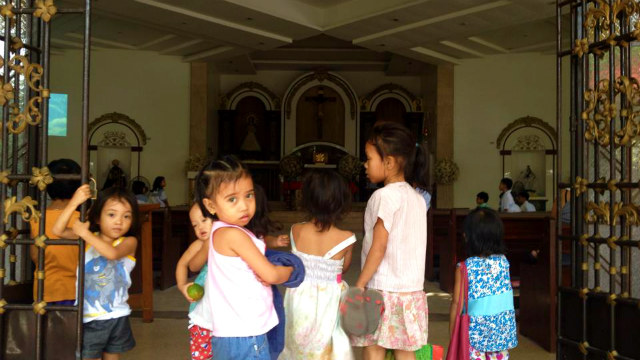 (It is very important that they’re given the chance to play and be healthy. They’re still kids and their poverty should not rob them of their childhood.)

The  current feeding program will end in February, and it will take a few months until a new one begins. Even if it is still a month away, the volunteers – already attached to the kids and their families – hope that the beneficiaries will continue with their recovery from malnutrition and poverty.

(I become teary-eyed whenever I remember that our program is going to end soon. The kids have become so close to us, so we really pray that they grow up strong, healthy, and far from poverty.) – Rappler.com