Facebook Twitter Copy URL
Copied
'According to Filipino community organizers, an estimated 7,000 Filipinos were among the crowd gathered outside St Peter’s Square to attend the Pope’s weekly Angelus'

VATICAN CITY – The Vatican City isn’t a place Filipinos congregate in numbers often. But because of the Pope’s recent visit to the Philippines, the Filipino community organized in the thousands to welcome the Pope back home to the Vatican.

Filipino community organizers said an estimated 7,000 Filipinos were among the crowd gathered outside St Peter’s Square to attend the Pope’s weekly Angelus.

Pope Francis recently returned from his visit to the Philippines, where he visited Manila and Tacloban. An estimated 6 to 7 million Filipinos came to witness the Pope’s mass at the Quirino Grandstand in Manila. According to the latest data, there are at least 108,000 documented Filipinos living in Italy, with a large portion of the Filipino population living in Rome.

Even before he landed in Manila, Pope Francis emphasized that OFWs would be a focus of his visit. “I looked at the Filipino employees, [and they told me] how they left their county to look for a better life, leaving behind mother, father, and children. The poor will be the focus,” he said before his trip to the Philippines, referring to an encounter he had with Filipino migrant workers in the Vatican. When Pope Francis visited the Malacañang Palace in Manila on January 17, he acknowledged the “often neglected but real contribution of Filipinos of the diaspora to the life and welfare of societies in which they live.”

This gathering was an attempt to replicate the Pope’s Philippine experience and to thank him for acknowledging the OFW community.

(The Filipinos are grateful people. We are good at showing gratitude. That’s why many Filipinos wanted to see the Pope for that occasion in the Philippines and we wanted to replicate the Manila experience.) 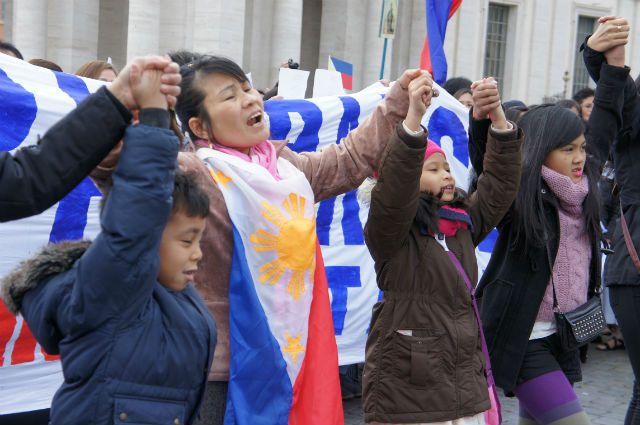 By 11:30 am, there was a sea of Filipinos shouting “Papa Francesco, mabuhay po kayo!” (Long live Pope Francis!)

They also sang for him “Tell the World of His love,” one of the songs used for the Pope’s visit to the Philippines.

During the Angelus, Pope Francis acknowledged the presence of the Filipino community, the crowd roar with cheers, and yelled in sync ‘Papa Francesco, we love you!’

The Pope thanked OFWs who attended for their enormous contributions to the Catholic Church, a theme he emphasized during his Philippine visit. Manila Archbishop Luis Antonio Cardinal Tagle said during a press conference on the last day of the Pope’s visit, “Our overseas Filipino migrant workers have become the big missionary presence… Without meaning to, they bring their faith also.” – Rappler.com

Jackie de Vega is an overseas Filipino worker based in Rome.