How hungry was the Philippines in 2014? 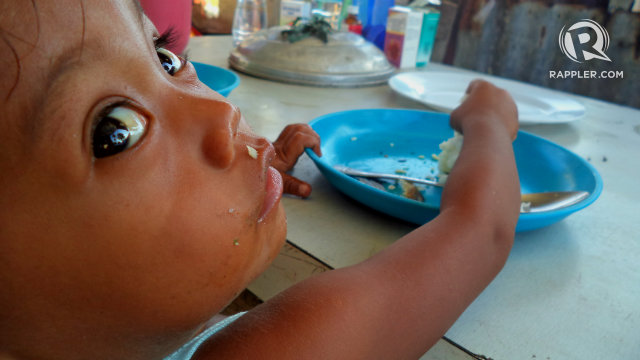 While the percentage of self-reported hunger among households fell from 19.5% to 18.3%, the country’s average hunger rates have barely changed in the past 7 years.

Meanwhile, families experiencing “severe hunger” partly increased in the past decade from 3% in 2004 to 3.5% in 2014, with Luzon having the highest rate.

The hunger issue took center stage in 2014, following a series of events:

Will the momentum continue in 2015? (READ: Pending PH bills on hunger)

The survey, however, also showed that public satisfaction with the government’s efforts in reducing hunger is “weak.”

Although the Philippines showed progress based on the SWS survey results, it did not fare well in the 2014 global nutrition report of the International Food Policy Research Institute (IFPRI).

The report showed that the Philippines is not likely to meet any of the 6 nutrition targets of the global World Health Assembly:

All these health problems, at some level, either result to or root from hunger.

The latest survey from the Department of Science and Techonology’s Food and Research Institute also showed little progress in eliminating malnutrition among poor Filipinos.

On the upside, the country’s global hunger index (GHI) has been improving in the past two decades. GHI is calculated based on a country’s data on undernourishment, child underweight, and child mortality.

Although the country’s hunger problem remains significant, it has also seen some progress over the years. In 1990, the Philippines had a hunger index marked as “alarming,” and at present, it was downgraded to “serious.”

For a country to have a “low” hunger index, its percentage must fall below 5% – a challenge the Philippines must be willing to take.  – Rappler.com

Know of clever and doable ways of fighting hunger? Send your stories and ideas to move.ph@rappler.com. Be part of the solution, be part of the #HungerProject.