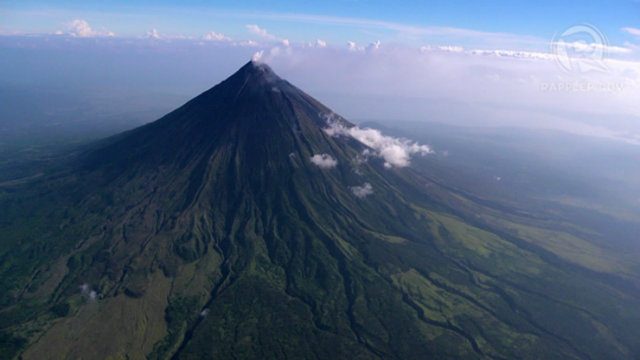 Mayon demonstrated a Plinian blast, the largest and most violent type of eruption, that partly destroyed the historical Cagsawa church in lahar. The church is about 10 km (6 miles) away from the volcano.

Plinian-type eruptions can produce ash falls, lava bombs, volcanic rocks miles away from a volcano. This is also the type of explosion that Mt. Pinatubo exhibited in its most destructive blast, one of the worst natural disasters in the country, in 1991.

The 1814 eruption is the “most destructive in terms of casualties and the distance that the volcanic hazards reached from the crater,” says the Philippine Institute of Volcanology and Seismology (PHIVOLCS) director Renato Solidum.

Solidum explained that while the eruption lasted only for one day, Mayon emitted large amounts of material during that short period. After the eruption, rains combined with volcanic ash producing lahar which flowed down the rivers and partly buried the distant church.

According to Solidum, from the analysis of PHIVOLCS, there were also pyroclastic flows that went down the slopes of Mayon and buried many areas in Albay during this particular eruption. Pyroclastic flows are dense mixtures of hot, dry rock fragments and hot gases.

World renowned for its almost perfect cone shape, Mayon is the country’s most active volcano according to Solidum. Albay’s Daragang Magayon (Bicolano words for “beautiful lady”) – is very temperamental. It has erupted nearly 50 times since its first recorded explosion in 1616. Those eruptions caused untold destruction and claimed many lives.

Below is a list of some of the notable eruptions of Mayon. These are mostly Vulcanian-type eruptions which are relatively small but violent explosions of thick lava producing columns of ash, gas and occasional pyroclastic flows.

Living with a highly active volcano and having to cope with strong typhoons almost every year has taught the people of Albay one very important lesson: disaster preparedness is very important.

The province boasts of a zero casualty record from disasters in 18 of the past 20 years. Preparation and adaptation is key to this success, Albay Governor Joey Salceda says.  (READ: Salceda: Funds for climate mitigation hard to get)

A permanent danger zone consisting areas 6 kilometers from the volcano was delineated and constantly observed. Sudden gas driven explosion may take place in these areas that could cause serious injury and death.

One incident that caused casualties was when a typhoon occurred after Mayon volcano exploded in 2006. A total of 1,399 people were killed in Bicol region including the province of Albay that year. Casualties were caused by the flood from Typhoon Reming (international name Durian), which hit the province months after the explosion, intensified by the lahar from the volcano.

Because of the disaster in 2006, the local government of Albay has learned its lessons. “I cannot remove Mayon volcano, I cannot stop typhoons, and people won’t move. We have to live and adapt with those factors,” Salceda said. Thus, on September 16, 2014, when Mayon showed signs of potential eruption, Salceda declared a state of calamity  in areas surrounding Mayon Volcano.

Inhabitants within the permanent danger zone and in the extended danger zone (areas 6-8 kilometers from the volcano) were evacuated immediately.

On December 19, 2014, the PHIVOLCS, observing a  “general decline” in the volcano’s activity, lowered the alert status for Mayon. By that time, the provincial government has already shouldered expenses to evacuate some 3,000 families for roughly 3 months. The expense was well worth it, however, as far as as the local government is concerned. What matters is that no lives were lost. – Rappler.com