Feeling at home at work: A SPACE Manila 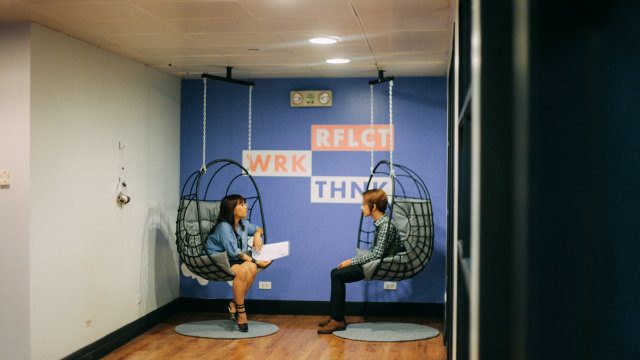 Everyday, Joseph David has to pass through bean bags before he reaches his desk. Today, he’s making a 3D image of a bald man; the other week, he was designing games. The 22-year-old calls himself an “all-around freelance artist.”

Across him was a pond of tilted heads, partially hidden by baseball caps and bulging headphones. Joseph shares his desk with them; every once in a while, someone walks over to him for a quick trade – ideas, artworks, snacks. It could be anything.

Joseph used to work from home. At first, it seemed like a good idea, he could literally work in bed. That set-up, however, soon felt like a trap; the line between work and home began to blur. 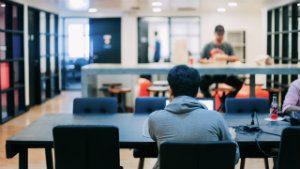 “I like it better here. The house is for rest and recreational activities not involving work. But here, aside from work, there’s also fun,” he says. 6 months ago, Joseph left his bed and brought his tools to “A SPACE Manila,” a co-working space.

Found at the heart of the country’s central business district, A SPACE attracts a diverse crowd engaged in information technology (IT), research, development, art and communications, entrepreneurship, among others.

A SPACE occupies two floors in a commercial building. It doesn’t have many partitions but has several windows. It’s a hub for creators; some drop by every other day, some are regulars, while others have their own “headquarters” (HQ).

Co-working is when people — mostly freelancers and start-up businesses — share space and resources. Start-ups usually have a small staff; instead of spending on expensive office rent, some opt to be part of “co-working spaces.” It not only saves them cash, but also exposes them to other start-ups and potential partners.

While A SPACE might feel more like a playground rather an office, it gets a lot of work done. A SPACE is home to 250 co-workers every day. Startups have their own HQs, rooms which can be “pimped” and rented for any duration depending on their needs. Internet and printing services are free, coffee is free-flowing, art, and books are everywhere.

“I first visited A SPACE during a typhoon last year, our office had no electricity or Internet then, but they had it here. That’s why we moved in,” says Max Stewart. He heads an IT company, with a team of 13. He currently has two HQs, since one room can no longer fit them all.

“People spend so much time at work, we should be able to enjoy it,” the 41-year old said.

Individuals not part of start-ups can also drop in. Aside from offering a comfy work space, A SPACE encourages people to “reflect, socialize, and dream.”

Around 400 people weekly also visit the place for its events. A SPACE supports local independent artists by hosting exhibits, gigs, and talks.

A SPACE started out as a one-man project by Matt Morrison, a former media man who traded it all for a life of advocating “ethical, value-creating start-ups” in the Philippines. He sees A SPACE as a place “where people can make things happen.” Before nesting in Legaspi in 2014, Matt originally set up A SPACE in Salcedo Village in 2011, merging cafe, bar, gallery, and workplace. “We were full in a couple of months, so I decided to make it bigger.”

For Matt, it’s hard to think outside the box when you’re literally stuck inside one. “There’s a lot of vibrancy in Manila, but when you go to work, location choices are very limited,” he observes. “People work in cubicles from 1970.”

His goal is to provide a home for Manila’s most innovative. “It’s not just about co-working, but also creating an innovation community.” The most innovative  are usually the most unconventional, he says, and A SPACE is there to free them from society’s work conventions. “In offices, where do you go for a break? Smoking area? CR?” Matt asks. “Here, 50 % is for office space, the rest is for other activities.” Every corner is filled with art that relaxes and inspires minds.

Although Matt’s team doesn’t do much advertising, the A SPACE community is continuously growing through word of mouth. “Our mission is not to sell to a market, but to expand ideas,” says Matt.

Each start-up at A SPACE has no more than 20 members each. Once they go beyond that, A SPACE helps them look for a new place as they transition into bigger companies.

What is the future of work in the Philippines? “Innovative communities will take over,” Matt believes. “Freelances working at home, this will change. There’s also a need for human connection.”

Matt’s team foresees a Philippines with more places like A SPACE sprouting across regions. “This is going to be a mecca,” Matt quips. “Conventional companies will soon also treat their employees like rockstars, bosses giving hugs, there’ll be more self-empowered employees.” – Rappler.com

A SPACE MANILA operates 24/7, however, drop-ins are only from 8am to 8pm. To learn more about how these folks work and play, get in touch with them through their website or Facebook page.