How do you use local disaster funds?

Feb 28, 2015 4:36 PM PHT
Facebook Twitter Copy URL
Copied
Local government units are mandated by the law to allot a portion of their yearly budgets to disaster mitigation, preparation and response. But what is the best way to use them? 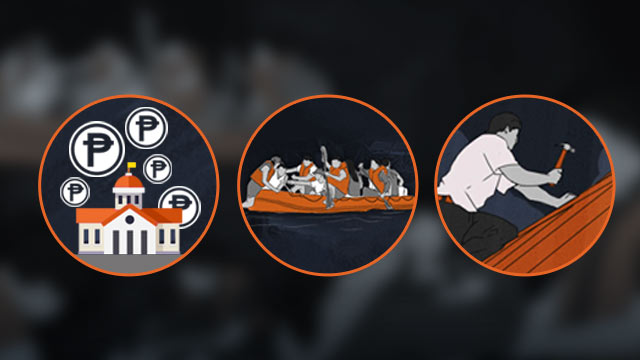 ANGELES, Pampanga – Given limited resources and the Philippines being the most disaster-prone among highly populated countries in the world, what’s the best use of disaster funds?

This was one of the issues that came up during the recent Project Agos workshop in Angeles, Pampanga. Typically, calamity funds are activated only when an area has been placed under a state of calamity.

However, the country’s approach to disasters changed after Metro Manila and its neighboring provinces were devastated by flooding during Typhoon Ondoy in 2009. A new law enacted in 2010 transformed the former National Disaster Coordinating Council (NDCC) into the National Disaster Risk Reduction and Management Council (NDRRMC). (READ: FAST FACTS: The NDRRMC)

Among other things, the law mandated all local government units (LGUs) in the country to allocate at least 5% of their yearly budgets for disaster risk reduction and management. 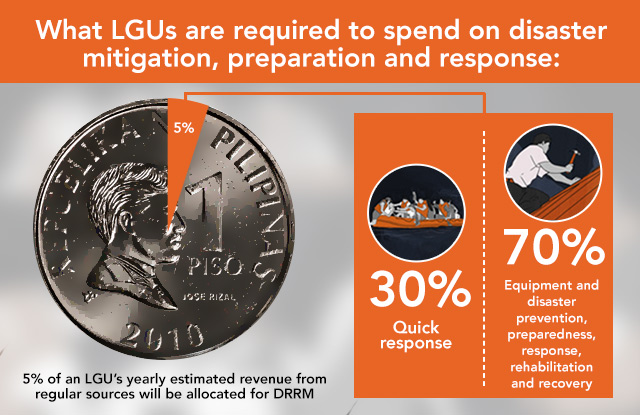 While LGUs are encouraged to put more funds into disaster management, proper planning is necessary to ensure that scarce resources are being used properly and not put to waste. It is also important that the funds address not only the short-term needs and problems, but the long-term ones, as well.

The Bulacan disaster management office, for instance, has been using funds for its information and education campaign for children.

(Recently, we purchased books for children for about P12 million. The handbook contains all hazard information, written in Tagalog. Those are hazards that can happen in Bulacan and all over the country. Topics like ‘things to do’ are also included in the book.)

“We focused on them so that while they are still young, they already know what to do during disasters. We started with elementary students, Grades 4-6,” Agustin added.

Meanwhile, Pampanga’s disaster management office continues to educate its local chief executives on the proper use of local disaster funds.

“In the orientations and seminars that we do, we always include an orientation on the utilization of the LDRRM (Local Disaster Risk Reduction and Management) fund. We also help them formulate their own 70-30 plan,” Yambao added.

Using their disaster funds, they also acquired additional equipment which can be used for disaster response.

Pampanga is one of the top 10 areas at high-risk to earthquakes and prone to landslides. For its disaster management initiatives, the NDRRMC awarded the Pampanga Provincial DRRM council the regional Gawad Kalasag in 2014.

On the other hand, Bulacan, a province vulnerable to severe flooding, has won the Gawad Kalasag twice.

At the launch of the Project Agos #ZeroCasualty campaign in October 2014, Albay Governor Joey Salceda encouraged LGUs to follow the law and use funds for DRRM in their area. “I think we should make LGUs accountable already. What are you doing with DRR funds?” he asked. Albay is famous for its zero-casualty during Typhoon Mario and Typhoon Glenda. (READ: Hours after #GlendaPH, Albay starts recovery efforts)

Salceda added that the local budgets of Metro Manila local governments alone already amount to P54 billion ($1.2 billion). “If you take 5%, that would be P2.5 billion ($56.6 million) for DRR.”

So if all local governments were to follow the law, how much would total local disaster funds amount to?

To find out, one needs to collate local budgets, which were difficult to obtain until 2012 when the Department of the Interior and Local Government (DILG) required LGUs to post those documents online, through the Full Disclosure Policy portal.

Part of the documents LGUs are required to submit is a report on the Local Disaster Risk Reduction Management Fund (LDRRMF) Utilization.

Not all local governments are able to allocate the amounts that the law requires them to allocate to disaster management.

The bigger challenge, however, is ensuring that funds are maximized to prevent loss of lives when hazards strike. This requires a keen understanding of the principles of disaster management, the nature of the hazards and risks communities are exposed to, as well as proper planning. – Rappler.com

The LGU capacity building workshop in Pampanga is part of a series of workshops that will be held across the country in the next 6 months with the assistance of the Australian government.

Project Agos harnesses technology and social media to ensure critical information flows to those who need it before, during, and after a disaster. It is a partnership between Move.PH, Rappler’s civic engagement unit, and agencies such as the Philippine Institute of Volcanology and Seismology (PHIVOLCS), the Mines and Geosciences Bureau (MGB), the Office of Civil Defense, the Department of the Interior and Local Government (DILG) and other key stakeholders.