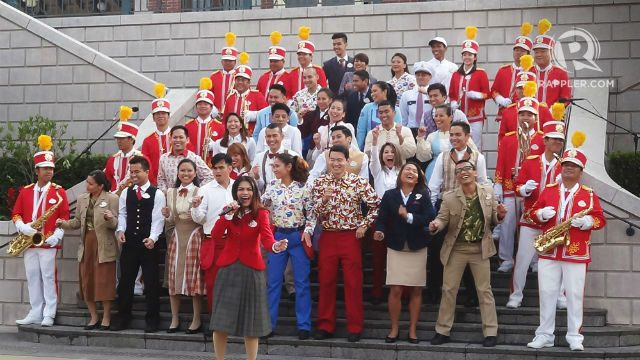 HONG KONG – When Rony Fortich, Hong Kong Disneyland music director, was asked to write the music for a Disney campaign for fellow Filipinos back home in the Philippines, he was excited and “couldn’t be happier.”

“It’s a cool tribute for the Filipinos who work here,” the award-winning director-composer who worked with various theater companies in the Philippines like Trumpets, Atlantis Productions, Actor’s Actors Inc, and Repertory Philippines, said enthusiastically.

Since he started working at Hong Kong Disneyland when it opened 10 years ago, Fortich pointed out Filipinos have been “a huge part of Disneyland,” performing on stage or working behind the scenes.

Fortich titled the song, which was later produced into a video with an all-Filipino cast, as Find Your Light.

The title is inspired by the common theater term “find your light,” where performers are asked to go to where the light is on stage so they can be seen. “It’s a great term to show how Filipinos can shine, and in what they’re good at,” Fortich explained.

Fortich asked Marvin Querido, musical director and arranger for Filipino artists, to arrange the music, which was then recorded with Filipino musicians.

The song has an upbeat tune, which Fortich intended, inspired by the Filipino spirit and music Filipinos love. “I kept in mind the Filipino mentality, how much we enjoy having fun, and how we get through a crisis and still find ways to smile,” he said. “When I write a song and feel good about it, and it makes me want to dance, tap my feet, or sing along, my hope is that other Filipinos will also feel the same way.” But that’s not all. “If you’re Filipino, you’ll see very familiar steps,” Del Prado revealed. Some of the steps, for example, were inspired by Gary Valenciano’s “Hataw Na.”

Lead choreographer of the video and Hong Kong Disneyland park choreographer Jaime Del Prado, in keeping with the upbeat tune, had the performers dancing in different areas of the theme park, and with the lead singer Rochelle “Raki” Vega walking and running around.

Vega is originally from Mandaue City, Cebu. Some may remember that she was the winner of ABS-CBN’s 2004 talent search Born Diva.

The cast Del Prado worked with were enthusiastic in showing the spirit of the song through their performance.  “It was exciting and fulfilling, because we knew exactly who it was for,” he said emphatically. “The performers in the music video were equally excited because their families and friends back home would see it. And they’re all proud to be part of this [Disney] family. For our families back home and our friends to see us working with our family here, it’s fulfilling for us.”

The fulfillment is especially sweet for Del Prado, who started in Hong Kong Disneyland as a performer and dance captain 10 years ago, and who worked his way up to park choreographer.  Back in Manila, he had been the resident choreographer of Repertory Philippines. Giving it her all

Raki Vega, who has been a performer at the theme park since 2010 and is currently “Golden Mickey’s” host “Bebe” and also singer for “Tarzan,” could not contain her excitement when she was chosen the main vocalist for the production.

Fortich, who chose Vega as vocalist, commended her as one of the artists who has “both great talent and attitude.” Prior to her work at Disneyland, Vega had played the lead in various musicals in the Philippines, had been mentored by Lea Salonga, and had been recognized as the Top 5 Vocalist of the World at the 2007 World Championship of Performing Arts in Hollywood. “I am very, very honored and humbled,” Vega exclaimed. “I’m very proud to represent our country.” She recalled thinking then, “Kung puwede kong ibigay lahat, at kung may puwede pa akong maibigay para sa ating bayan,  gagawin ko.” (If I could give it my all, and if I could give more for our country, I would do it.)

Indeed, Vega gives it her all. “When I’m singing, I mean what I sing. Every word matters to me,” she said passionately. “When I sing this song, I think of everything – all the experiences I had, all the past performances.”

She said she also had to work extra hard as it was “different” performing for fellow Filipinos. “May konting kaba, kasi magaling sila. Appreciative yet marunong makinig.  (I feel a bit nervous, because they’re good. They are appreciative but they know how to listen [and judge]).”

She feels that the video portrays other Filipinos’ story as much as hers. “Actually, it’s an anthem for Filipinos fulfilling their dreams in their own way here at Hong Kong Disneyland.”

And, on fulfilling her own dreams, Vega said with a smile: “I’m still finding my light. I’m still growing as an artist.”

Meanwhile, for actor-singer and single father Gian Magdangal, Disney gave him “that light.”

One of the backup vocals for Find Your Light, Magdangal went onboard Hong Kong Disneyland just 4 months ago as a performer for “Golden Mickey’s.” Once a talent of a noontime show and an actor of soaps and musicals, when his contract ended with GMA 7 network, he had to look for other options also to support his 6-year-old son.

His decision to sign on with Hong Kong Disneyland was for him a “father’s decision.”  His being a father also inspires him to make children smile with every performance and to “keep it real, keep it genuine, as kids will know if you’re sincere or not.” Weaving all these Filipinos’ stories together is the Pinoy brand of talent and work ethic.

“Singing is natural for us Filipinos,” Del Prado said. He recalled his audition with Hong Kong Disneyland, where the casting director was impressed with all the Filipinos’ auditions. “He said, ‘I wish I can bring all of you back to Hong Kong but I only need a certain number.’”

“Filipinos are globally respected as performers,” David Lightbody, Hong Kong Disneyland’s director for entertainment and costuming, affirmed. Having worked with Filipinos in musical theater, he said his work at Disneyland only “reconfirms that Filipinos have a very special quality.”

“They have great amazing commitment and dedication to work,” he explained, also talking about the Filipino spirit. “There’s something about them, an inner passion, and it’s a happy passion that bursts out in their performances.”

Lightbody is also impressed with the Filipino cast’s “dedication to every single show,” which is difficult, especially when one has done the show hundreds of times.

“[But] Filipino performers understand that every individual watching in each show is critical. Every day is opening day, and every night is opening night,” Lightbody pointed out.

Del Prado attested to this attitude. As an example, he mentioned one of the Filipino members of the cast of the “Festival of the Lion King:” She’s been here 10 years, and she still dances like she just got hired yesterday.”

With such talent and commitment, Filipinos in Hong Kong Disneyland would indeed have no trouble finding their light there, or anywhere. – Rappler.com

Claire Madarang is a contributing travel writer for Rappler. She blogs about her adventures, travel tips, and epiphanies at Traveling Light.