Why I became a librarian 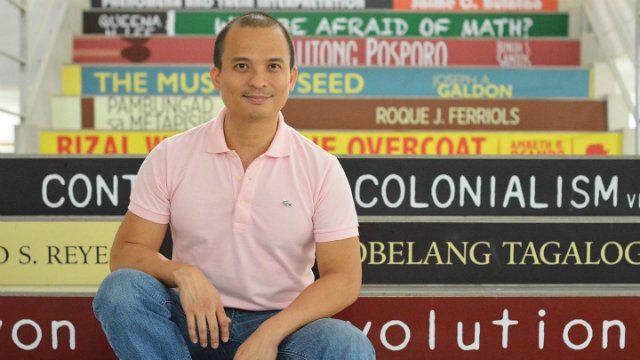 Facebook Twitter Copy URL
Copied
What can I see myself doing 10 years from now? The answer to this question was 'I love reading books,' but it was obvious that there is no career in reading for me

“Grade 2 pa lang ako, laman na ako ng library.” (I already frequented the library as early as when I was in Grade 2.)

The first book I ever borrowed at the grade school library was The Melted Coins, a Hardy Boys mystery. After finishing the entire series sometime in Grade 6, I was allowed to borrow a few books, including Robert Ludlum’s The Scarlatti Inheritance, from the restricted faculty collection by appealing to Ms Grace Valente, the first librarian I asked to bend a rule for me.

At the high school library, I never had to ask for special permission to borrow books, but it probably wouldn’t have been difficult because Mrs Inday Lara, the librarian, was my father’s childhood playmate.

One book I will never forget is William Goldman’s Adventures in the Screen Trade, which introduced me to the practical aspects of filmmaking in an engaging, non-technical manner. I liked it so much that I borrowed and reread it every year. If the yellow borrower’s card at the back is still there, you’ll see that I signed my name consecutively.

When I moved on to college, I was happy to finally become a legitimate user of the Rizal Library. I had been able to use it a few times as a high school senior, but I always felt like a guest afraid to overstay his welcome. This time, however, I could browse the books without having to sign in and indicate what my research topic was.

In particular, I liked looking at books that had just been returned, which I took as an indicator that they were worth reading. That’s how I found Ogilvy on Advertising, which opened my eyes to the realities of communicating with potential customers, even before we had to discuss the subject in class.

On becoming a librarian

After graduating from college in 1995, I still had no idea what I wanted to become. But I knew it had to be something I enjoyed doing and it had to be meaningful.

For a while, I found meaning in my job as a service quality officer in a bank, but after 4 years I decided to move on.

Then, I considered the possibility of becoming a Jesuit. I lived for a year in Arvisu House, a place where young men stayed while thinking about joining the Society of Jesus, and took subjects once again at the college, and at the Loyola School of Theology. At the end of the year, however, it became clear that the Jesuits and I were better off as friends, not “married.”

It was then that the period I call my “wandering in the desert” years began.

I taught high school religion at the Jesuit-run Sacred Heart School for Boys in Cebu for a year, joined the Social Security System for a few months as a consultant (and vowed to avoid government jobs forever), worked as a quality supervisor in a call center for an even shorter period, edited books for publication as a sideline, and explored the possibility of getting an MA in Theology or an MBA.

The last option got me thinking about what I really wanted to do with my life.

Further discernment led me to ask two questions: “What do I really like doing?” and “What can I see myself doing 10 years from now?”

The answer to the first question was “I love reading books,” but it was obvious that there was no career in reading for me. Then I remembered my library experiences as a student, and I wondered if there was such a thing as a master’s degree for librarians. Google told me there was such a thing, so I enrolled in 2002, finished my graduate degree in library and information science by 2004, took the board exam for librarians, got my license to practice, and eventually left for Canada to study for a PhD in book history.

A few relatives and friends urged me to stay in Canada after obtaining my degree, but I knew that I wanted to work in the Philippines. But where? My doctorate rendered me overqualified for most librarian jobs, except for the largest universities. However, as a blue-blooded Atenean, former Jesuit wannabe, and government-averse Filipino, I could not imagine working for other universities.

Fortuitously, Mrs Lourdes David, the Rizal Library’s Director, was retiring soon, and a search committee had been formed to look for her replacement, preferably someone with a PhD. In my application, I emphasized that I was an Ateneo alumnus along with my other qualifications, and hoped for the best.

And so it happened that 30 years after I borrowed my first library book, almost 20 years after graduation, and exactly 10 years after asking my second question, I was hired to do something meaningful that I enjoyed doing.

I’ve been asked the following: Why did you leave your nice job in Makati? You’re a Management Engineering graduate, why do you want to be a librarian? You were already in Canada, why did you return to the Philippines?

The answers to each of these questions can be the subject of separate articles, but they are all essentially products of the process of discernment that I learned as an Atenean and as a Jesuit wannabe.

Over the years, I’ve identified with Joseph, who was sold into slavery in Egypt, but eventually found his way back to Israel. I tell people that I’ve gotten lost and taken some wrong turns over the years, but, somehow, for some unknown reason, God takes care of me whether I deserve it or not.

This is how I know that God does, in fact, write straight with crooked lines, with long detours, and with borrowers’ cards.

St Ignatius was right. We can, in fact, find God in all things. Even in the library. – Rappler.com

This piece was originally published in his blog. It was republished with permission. Photo by Daniel Tan.