Mar 5, 2015 5:05 PM PHT
Fritzie Rodriguez
Facebook Twitter Copy URL
Copied
How big of a problem is violence against women in the Philippines? Why should it concern you?

MANILA, Philippines – Violence against women (VAW). The Philippines is no stranger to these 3 words. It is real, it is happening, it is claiming lives.

VAW is linked with the unequal power relationship between women and men, resulting from society’s misinformed views on gender and sexuality, according to the Philippine Commission on Women (PCW).

Men are traditionally labeled as leaders and providers, while women are seen as nurturers and supporters. “This perception leads to men gaining more power over women,” PCW stressed, adding that “VAW is a form of men’s expression of controlling women to retain power.”

Although the government recognizes VAW as a “pervasive social problem” and sets necessary policies and programs in place, several Filipino women and girls continue to experience different forms of abuse every day. 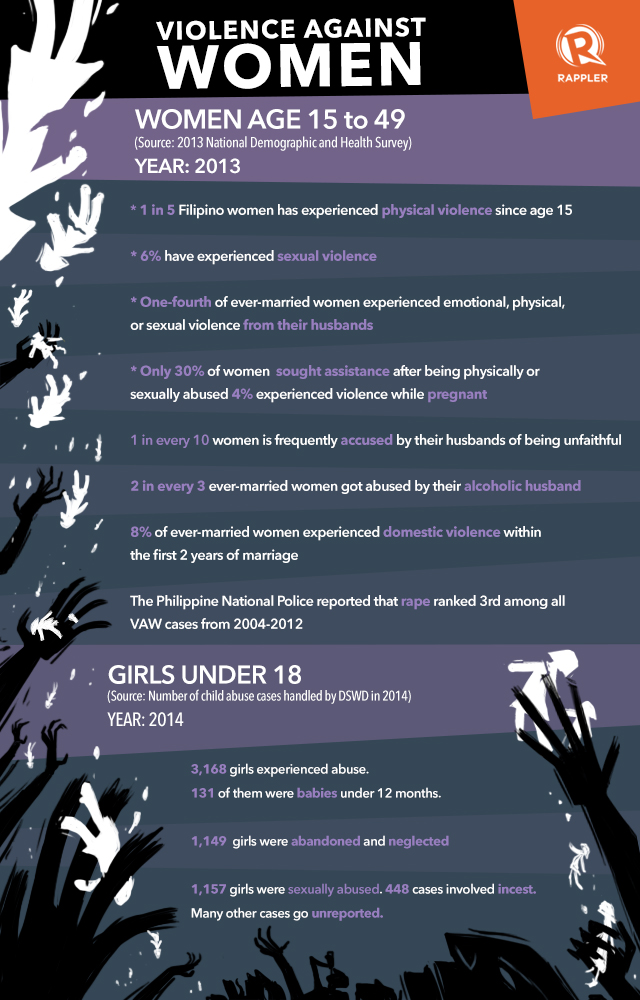 The Philippines has been among the world’s most gender-fair countries since 2006, according to the World Economic Forum’s Gender Gap Report In 2014. The Philippines ranked 9th globally and topped all of Asia in terms of women’s participation in economy, education, health, and political empowerment.

While the world celebrates a seemingly woman-friendly Philippines, the number of VAW cases reported to the Philippine National Police (PNP) has increased by over 500% in the past 16 years.

The country implemented the Anti-Sexual Harassment Act in 1995, the amended Anti-Rape law in 1997, the Rape Victim Assistance Act in 1998, and the Anti-VAWC Act in 2004.

In 2004, VAW cases dropped by 13% from the previous year. The decrease continued until 2006. In the succeeding years, however, cases crept higher. This is despite the enactment of the Magna Carta of Women in 2009, mandating the government to ensure that women are “protected from all forms of violence.”

“The trend, however, is not conclusive of a decreasing or increasing VAW incidence in the country because data are based only from what was reported to PNP,” PCW said.

Although statistics do not paint the full picture, the increasing trend could also suggest that more Filipinos are speaking up and reporting abuse since awareness on laws and services may be rising. “Continuous information campaign on the law and its strict implementation may have caused the increasing trend,” PCW suggested.

In 2013, Western Visayas had the highest number of reported VAW cases, according to PCW. The region accounted for 20% of all cases nationwide. Meanwhile, ARMM had the lowest.

The number of reported cases, however, do not necessarily reflect the real frequency of abuse in an area. As of 2014, Western Visayas was among the regions with the most VAW desks, with 99% of its barangays complying, the Department of the Interior and Local Government reported. Meanwhile, ARMM had the fewest at only 11%. 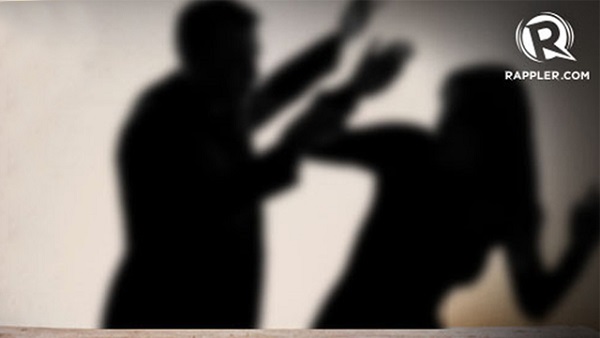 VAWC is not only a crime, but also a gross violation of human rights.

“It does not only affect women’s physical and reproductive health, but especially their mental and emotional state,” the Department of Health (DOH) said. “VAW limits human development and curbs their capacity to participate in social development.”

Women also miss out on school or work, their “productivity decreases due to frequent absences resulting from VAW,” DOH added.

Every woman’s experience of abuse is different, and each one of them deserves respect and support. Violence comes in different forms:

Violators of the Anti-VAWC Act can be imprisoned. The law also requires offenders to provide support to the offended party if needed. To prevent further abuse, the law allows victims to issue protection orders (PO) against offenders, requiring the latter to stay away and to cut off contact, either temporarily or permanently.

Aside from the woman herself, others can petition a PO for her. This includes her relatives, social workers, police officers, barangay kagawad, lawyer, counselor or healthcare provider. It may also be filed by at least two concerned citizens who have “personal knowledge” of the abuse.

Women may seek assistance from the Department of Social Welfare and Development, which runs temporary shelters for abused women, alongside counseling, recovery, rehabilitation programs, and livelihood assistance. The DOH also assists with their medical needs.

The country’s battle against VAWC should be fought not just by women, but by everyone.

As for the government, an interagency council is at the battle’s frontlines. The council is composed of different government agencies covering issues on health, education, social welfare, local governance, employment, and justice.

All agencies and LGUs are also mandated by law to allot at least 5% of their total budget for gender and development programs which may include gender-sensitivity training, women’s health centers, among others.

Aside from stronger implementation of laws, penalties, and recovery programs, advocates emphasize the need for better prevention. Both women and men, young and old, must be educated about human rights, women’s and gender issues, and the roles they play in ending discrimination.

Rehabilation programs, advocates suggest, should also cover perpetrators to prevent them from falling into a cyclical pattern of abuse.

The more informed women are, the more empowered they will be. And an empowered society has no room for violence. – Rappler.com

For more information or assistance, you may get in touch with the following VAWC hotlines:

Got stories to tell? Share your stories and ideas on women and gender with move.ph@rappler.com. Speak up on #GenderIssues.