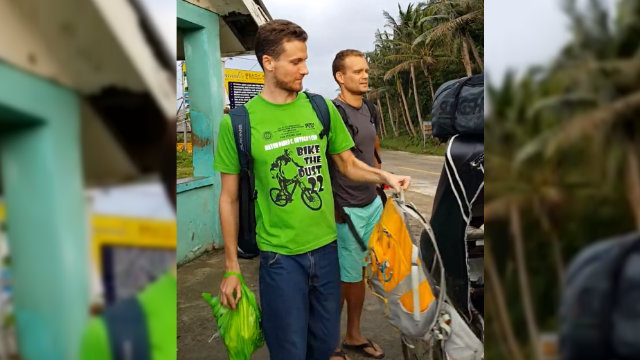 Facebook Twitter Copy URL
Copied
'I became very interested in Philippine languages, culture, and the education system, and have gotten involved in many work projects that combine these interests,' says Firth McEachern

First uploaded on February 28 by Romulo Mallanao, the video has reached over 941,000 hits as of posting.

Amazed, Mallanao said he asked permission from the foreigner if he could record a video of him conversing in Ilocano with him. He agreed and responded to Mailanao’s questions in Ilocano as the Canadian prepared to get on a tricycle ride with his friend to Walis, Ilocos Norte.


Man behind the video

The Ilocano-speaking Canadian is Firth McEachern.

Before he came to the Philippines for a 6-month contract project, McEachern was doing solar system research at Harvard University, particularly about asteroids.

“People are often surprised to hear that (solar system research), since it’s so far from what I am working on now,” McEachern said in an interview, referring to local languages and education.

An NGO sent him to the Philippines for sustainable development projects in 2010 for 6 months, but he decided to stay on  to work on a combination of education and language projects completely unrelated from his college degrees.

“I became very interested in Philippine languages, culture, and the education system, and have gotten involved in many work projects that combine these interests,” McEachern said.

McEachern has a special mission in the Philippines. He is currently working on a policy that promotes the inclusion of the native language, Ilokano, in government services and communication, alongside other official languages.

He helped the provincial government of La Union in the local implementation of the new mother tongue-based multilingual policy, facilitated trainings, and conducted research on Philippine languages in education.

McEachern also speaks Filipino and knows a few words in Cebuano and Kapampangan.

“These languages are part of the cultural wealth of the country, but to some extent they are perhaps undervalued,” he said.

McEachern added:  “I’m glad the government is now including mother tongues in elementary education, but more could be done. Limited room is given for the use of local languages beyond Grade 3, with schools restricted to English and Filipino as mediums of instruction.”

He said he remains hopeful that the Philippines will join the increasing number of countries that are starting to recognize their internal diversity.

McEachern also said he disagrees with the Filipino notion that speaking English would uplift even one’s social status.

“Many rich families only speak to their children in Tagalog and some English, because these languages are (apparently) of higher status symbols than Ilokano,” he said.

“I hope we can consider giving more attention to the other regions, their languages, their cultures, and their people. In my own personal capacity, I will continue to learn the native tongue of the communities that I live in, based on respect, friendship, and intellectual development,” he added.

Filipinos are very hospitable people, friendly, and fun-loving, he said.

“They are curious to know about other places, their religions, and way of life. I like how strong family bonds are in the Philippines. Parents will always be a part of their children’s lives and vice versa until old age, and people even keep track of distant relatives,” he said, describing Filipinos.

McEachern was also amazed at how Filipinos share even small things to others.

But he also has frustrations with Filipinos.

“The one thing that frustrates me a little is the tendency to overvalue what they don’t have, and undervalue what they do have. Many people in the provinces think it’s better to have fairer skin, buy Western brands, have relatives working in Manila or abroad, listen to mainstream music, etc. Meanwhile, local characteristics and materials are not as appreciated,” he said.

McEachern flew to New York on March 3 and is set to come back to his “second home” later this month.  – Rappler.com