MANILA, Philippines – Wednesday, March 18, was supposedly the last day of the 3rd United Nations (UN) World Conference on Disaster Risk Reduction, but the conference went overtime until midnight of Thursday, March 19, to approve a post-2015 framework for disaster risk reduction.

The most contentious issue during the last 72 hours was countries’ commitment on resources, Social Welfare Secretary Corazon Soliman said in a news conference Friday, March 20.

“It really became a difficult negotiation. It was a negotiation where issues of indicators and targets were very contentious, and is really looking at what countries are willing to commit so that they will be able to ensure that there will be risks reduced,” she added.

“We have shown the world that we have learned our lesson,” Soliman said, referring to Super Typhoon Yolanda (Haiyan) – the strongest typhoon in recent history which ravaged the Visayas in 2013.

For instance, Singson talked about rebuilding infrastructure that is disaster-resilient, while Balisacan spoke of the Philippines’ economic loss in the aftermath of Yolanda. 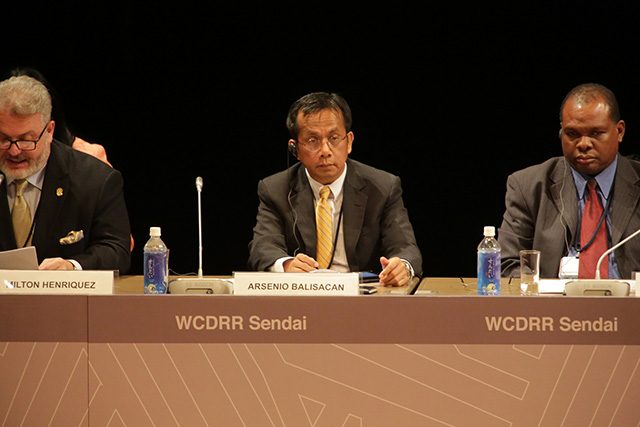 Soliman added that countries at the conference appreciated the Philippines for its strong government coordination, its various disaster risk reduction legal frameworks, and the pre-disaster risk assessment that it first implemented during Typhoon Ruby (Hagupit) in December 2014. (READ: Typhoon Ruby: Have we learned lessons from Yolanda?)

“There are many partnerships that we have been able to forge specifically with those interested in supporting renewable energies and building resilience by way of a risk-informed analysis and risk-informed decision,” she added.

The Philippines committed to the Sendai Framework for Disaster Risk Reduction 2015-2030, the successor of 10-year-old Hyogo Framework for Action (HFA).

In the 25-page framework, countries came up with 4 priority areas for action:

Countries also agreed on 7 global targets that will be measured at the global level: