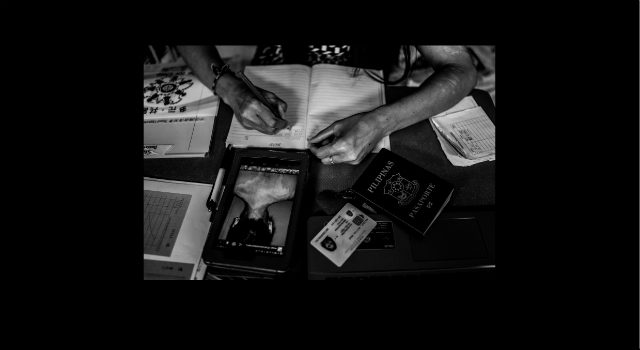 HONG KONG – From her poverty-stricken roots in a Philippine backwater to domestic service in Hong Kong to acclaim in New York, Xyza Cruz Bacani‘s inspirational journey started with a camera bought with borrowed money.

The 28-year-old came to Hong Kong 9 years ago to join 300,000 other women working as maids in the city, hoping to earn enough money to help fund her brother’s education.

But photography has transformed her life, her images of everything from trips to the supermarket to scenes of abuse at a refuge for domestic workers earning laudatory spreads in international media and at exhibitions.

Bacani was recently named as one of the recipients of a fellowship by the Magnum Foundation, a prestigious scholarship that will allow her to study in New York for 6 weeks.

With that in mind, just a week ago, she quit domestic service to pursue her passion for photography. But when she first came to Hong Kong, survival was her first priority.

“The urge to survive is much bigger than the urge to do art,” she told Agence France-Presse in Macau where her photographs are on show as part of the city’s Literary Festival.

A self-professed dreamer, she said she also saw the move to Hong Kong as an opportunity to leave her home village, 9 hours’ drive from the Philippine capital Manila.

“It was a big contrast when I arrived at the airport, I was very excited because everything is moving fast, and the lights are wonderful, it looks so alive compared to my village,” she said.

Her passion for photography really took off 4 years ago, when her employer – whom she describes as a “great lady” – lent her the money to buy her first camera, a Nikon D90.

“When I had (the camera), I shot landscapes to flowers to (portraits of) my mom, and then I did street photography.”

From that point on Bacani took photographs at every opportunity she had, whether out buying daily produce for her employer or ranging across Hong Kong on Sundays off work.

At first she only shared her pictures with friends on Facebook – mostly shot in grainy black and white, capturing street moments in classic reportage style.

A Filipino photographer based in San Francisco saw them on Facebook and was intrigued by their originality and quality. From there she came to the attention of the New York Times Lens blog and then of acclaimed photographer Sebastiao Salgado, who praised her work at an exhibition in Hong Kong late in 2014.

Reflecting on her journey thus far, she marvels: “Right now it’s changed my life 180 degrees, here I am having a show in Macau, going to places.”

A voice for the unheard

With increasing concerns over the treatment of domestic helpers in Hong Kong and the region, Bacani is now turning to documentary photographyto try to draw attention to abuses.

“That’s what I want my photography to do, to be able to help people… To me, photography is a very powerful tool to change someone’s perspective towards an issue,” she said.

In the summer of 2014, Bacani documented migrant workers who had taken shelter at a refuge after suffering abuse at the hands of their employers, an experience she described as “life-changing.”

“I was angry at first, it was a roller-coaster of emotion when I saw this kind of situation.

“I think I was there to be the voice of those domestic workers who remain unheard, whose voices have been muted.”

In February, a judge sentenced a Hong Kong woman to 6 years in jail for beating and starving her Indonesian maid in a case that made global headlines.

Bacani’s own employer could not be more different, she says, offering support and encouragement to pursue her plans of becoming a photographer full-time.

“She said my domestic worker duties… are restricting me from growing up as a person. It’s a chain that holds me,” Bacani said, after stopping her domestic work mid-March.

Bacani’s story has inspired many other helpers in the city, and she is urging them to pursue their dreams too.

“They keep on telling me… now that they’ve seen me, I made them realize that it’s possible to do the things that you really want to do outside your job.”

“I want people to see that your job, your work, it doesn’t define who you are,” she added.

“The dreams that I had when I was young, I’m having them now.” – Aaron Tam, Agence France-Presse/Rappler.com