Mar 27, 2015 5:53 PM PHT
Jodesz Gavilan
Facebook Twitter Copy URL
Copied
The P7.7 billion allotted to the Sangguniang Kabataan can be used for programs addressing hunger and malnutrition across the country 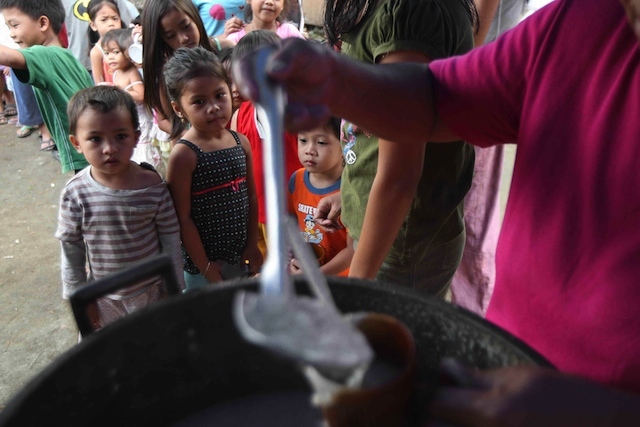 MANILA, Philippines – The recent decision to move the Sangguniang Kabataan (SK) elections again to October 2016 might be a silver lining in the fight against hunger, Senator Ralph Recto said on Friday, March 27.

According to the senator, the P7.7 billion ($171 million)* allotted to the SK in 2015 can be channeled to programs that address the rising problem of hunger, which affects 18.3% of all households in the Philippines. (READ: How hungry was the Philippines in 2014?)

The amount comes from the 10% share of SK from the P76.7 billion ($1.7 billion) Internal Revenue Allotment given to barangays this year by the national government.

“If there’s a dividend to be gained from the postponement, then it should come in the form of children’s meals,” he explained.

Despite the lack of SK officers and the provision postponing yet again the elections signed on Wednesday, March 25, the law that requires 10% of barangay funds to be utilized “solely for youth development programs” is still fully in effect.

Recto believes that the Palace can recommend the use of the allotted funding for projects that may benefit constituents suffering from hunger and malnutrition.

“Malacañang can officially encourage the use of SK funds for nutrition projects by ordering the appropriate agencies to issue circulars recommending to barangays that feeding projects be prioritized,” he explained. “The right of the barangays to select projects will remain but the circular will just provide strong guidance.”

According to the latest Food Consumption Survey (FCS) of the Food and Nutrition Research Institute (FNRI), 69.3% of all Filipino households do not meet the dietary energy requirements for each day. (READ: More Filipinos eat less – survey)

Aside from feeding programs, the SK money can also be used to promote awareness about the importance of proper nutrition.

“It can tackle the supply side by sponsoring the cultivation of vegetable plots, establishment of food banks, or even education drives that will warn against unhealthy food,” Recto said.

Pushing for more efforts against hunger and malnutrition can do wonders to children as their skills are less likely to be negatively affected.

By addressing the current trend of deficiencies, a child’s potential – through the development of physical and cognitive skills – can be fully realized. (READ: #HungerProject: The key to solving hunger in our lifetime)

The government has already appropriated a significant amount within the 2015 national budget to counter the rising number of children suffering from malnutrition. (READ: Gov’t feeding program to benefit 4M ‘wasted’ children in 2015)

The Department of Education (DepEd) has P2.8 billion ($62 million) to spend on meals for almost two million undernourished children in grade school.

Meanwhile, the supplemental feeding program of the Department of Social Welfare and Development (DSWD) will get P3.36 billion ($75 million). This program covers 2.5 million children under 5 years old currently enrolled in day care centers in communities across the country.

However, the SK money is more than the existing allotted budget for the anti-hunger projects.

If implemented properly, especially through grassroots initiatives, this can result in a lesser number of malnourished children and eventually, zero hunger across the country.– Rappler.com